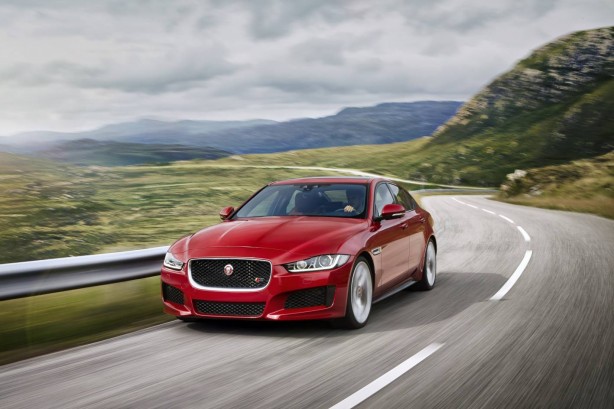 The highly anticipated Jaguar XE has been revealed to the world during a star-studded event held at Earl’s Court, London.

The XE is now Jaguar’s most important model, set to take on the premium sports saloon segment with advanced lightweight construction, streamlined styling, luxurious interior, and outstanding ride and handling. It rivals the likes of BMW 3 Series, Mercedes Benz C-Class and Lexus IS. The XE now completes the Jaguar saloon car range sitting below the XF and XJ models.

Set to go on sale in 2015, the world premiere of the XE began with the high-performance S model. The range topper is powered by a supercharged 3.0-litre V6, generating 250kW of power and 450Nm of torque. Driving the rear wheels through an eight-speed automatic transmission with paddle shift controls, the XE S sprints from standstill to 100 km/h in 5.1 seconds before hitting an electronically-limited top speed of 250km/h. 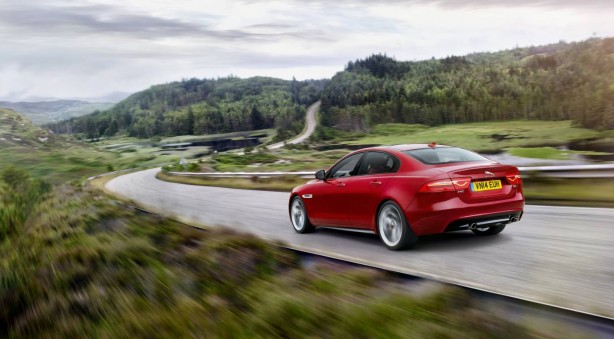 The XE is the first model designed around Jaguar’s all-new modular architecture and is the only car in the class to use an aluminium-intensive monocoque. Jaguar claims the aluminium-intensive XE will set the standard for driving dynamics in the midsize segment, while the long wheelbase and low seating position enable perfect proportions and a streamlined, coupe-like profile.

The XE is also the lightest, stiffest and most aerodynamic Jaguar saloon ever built. It is also the first Jaguar to be equipped with electric power steering, tuned to provide improved responsiveness and feel but with lower energy consumption than hydraulic systems.

The styling is all Jaguar, with a strongly-sculpted bonnet for a taut, muscular appearance. The rising waistline adds to the sense of movement, while the form of the rear quarters takes inspiration from the F-TYPE Coupé. The signature J-Blade running lights are another instantly recognisable Jaguar design element. In the rear lights, a horizontal line intersecting a roundel is a styling feature inherited from the iconic E-type.

The XE S will be joined by other models powered by efficiency-focused 2.0-litre, four-cylinder petrol and diesel engines matched with either six-speed manual or eight-speed automatic transmissions. 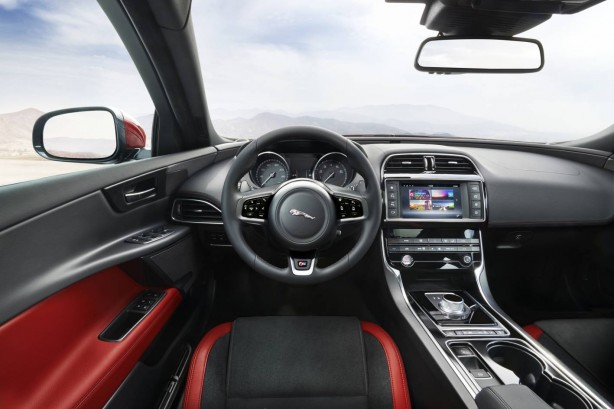 In a quest to take the crown as the most dynamically capable in its class, Jaguar’s vehicle dynamics team opted to use double wishbone configuration for the front suspension over the more conventional MacPherson strut design. The aluminium front knuckles are as light as they are stiff and are forged from cast blanks using a patented production process.

It’s the same story at the rear, where conventional multilink rear suspension couldn’t deliver Jaguar’s dynamics targets. The solution was Integral Link: a system usually found only in larger, more expensive vehicles and which delivers the ideal lateral and longitudinal stiffness values needed for the XE’s precise handling and supple ride. Aluminium has been used extensively, minimising weight.

Jaguar is launching the XE with a new family of engines – Ingenium. This in-house modular design began from a clean sheet and is manufactured at Jaguar Land Rover’s new £500 million UK Engine Manufacturing Centre.

With over 2 million miles of real-world testing, Ingenium is engineered to deliver benchmark fuel efficiency, refinement and performance. The first Ingenium engine to come off the line is the 2.0-litre four-cylinder diesel rated at 120kW/380Nm. More powerful versions will be added to the range. A 2.0-litre turbocharged direct injection petrol engine will also be offered further down the track. 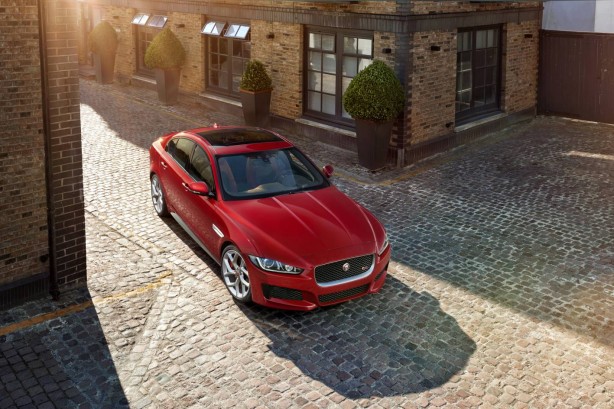 The XE is the first car in the world to be equipped with All Surface Progress Control (ASPC). This all-new system, developed with the input of decades of Jaguar Land Rover experience in off-road traction systems, works like a low-speed cruise control. ASPC functions between 3.6km/h and 30km/h: by precisely controlling the brake system and the powertrain it delivers optimum traction in the most slippery conditions without skidding and without the driver using the pedals.

Another feature is the laser head-up display (HUD) technology which projects high-contrast colour images onto the windscreen, providing the driver with information such as speed and navigation instructions.

The XE’s all-new InControl infotainment system offers Bluetooth, audio streaming and USB connectivity and Wi-Fi hotspot through an eight-inch touchscreen. The InControl Remote functionality allows users of iOS and Android smartphones to connect to the car from wherever they are and control a range of vehicle functions. These include seven-day timed pre-setting of the XE’s climate control system, locking or unlocking the doors, or starting the engine.

Jaguar will reveal the entire XE range at the Paris Motorshow in October. Full details on Australian specifications will be announced closer to local launch.