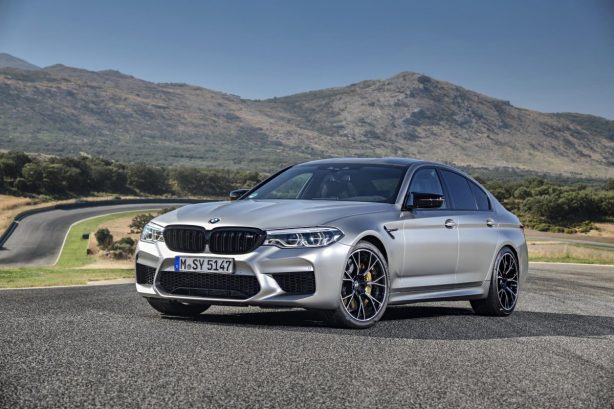 The new BMW M5 Competition has been officially unveiled, bringing a 19 kW hike in engine output over the standard M5 to 460 kW, even more direct responses and bespoke chassis tuning for a race-inspired driving experience.


The new BMW M5 Competition features model-specific engine mounting, which also has a noticeable impact on its performance abilities.

The engine mounts have modified characteristics and an increased spring rate, and the drive unit’s firmer connection to the vehicle’s structure results in even more direct engine response and immediate transmission of its power to the drivetrain.

It’s said that the car also turns into corners with noticeably greater directness and precision on account of the mounting’s stiffer characteristics. 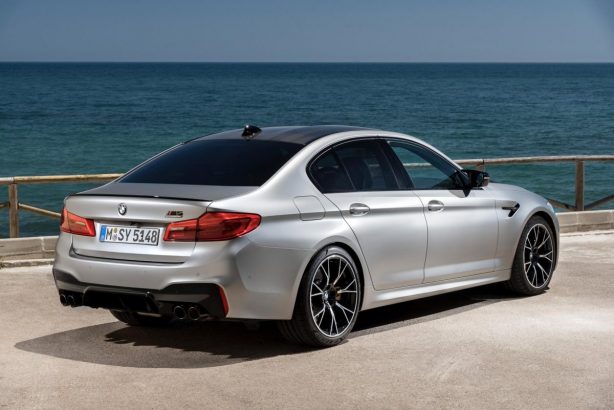 The task of relaying the new BMW M5 Competition’s engine power is again handled by the eight-speed M Steptronic transmission. Three different modes offering a choice of efficient, sporty or ultra-dynamic driving can be activated using the Drivelogic rocker switch on the gear selector.

Having made its debut in the standard M5, the M xDrive all-wheel-drive system now also feeds the further increased power of the M5 Competition with a rear-biased setup.

If desired, a rear-wheel-drive-only setting (2WD) allows experienced and skilled drivers to revel in the experience offered by past generations of the BMW M5 – i.e. handling in its purest form, with no control systems holding the car back.

The new BMW M5 Competition is equipped with model-specific chassis tuning which includes tweaks to the wheel suspension, springs and dampers.

The increased camber at the front axle enhances the car’s ability to absorb lateral forces through high-speed corners. Fitting the toe links with ball joints instead of rubber mounts promises even more precise wheel guidance at the rear axle. And the rear anti-roll bar also has a firmer spring rate.

The front axle of the new M5 Competition is equipped with a newly designed mounting for the anti-roll bar. Making the springs at the front and rear axles ten per cent stiffer than on the standard M5 has produced a firmer ride, which also has a positive impact on steering response.

Elsewhere, shorter auxiliary springs reduce fluctuation in wheel loads, as does the unique tuning of the damper hydraulics.

Standard specification for the new BMW M5 Competition includes exclusive M light-alloy wheels sporting a Y-spoke design in a bi-colour finish. The 20-inch forged wheels are shod with mixed-size tyres measuring 275/35 R 20 at the front and 285/35 R 20 at the rear. 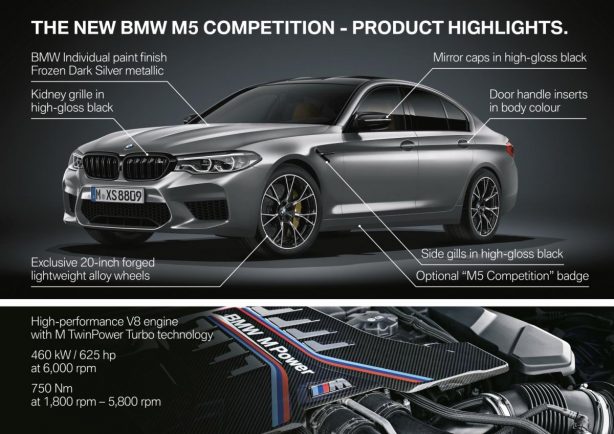 The exclusive feel of the new BMW M5 Competition is further enhanced by a selection of other model-specific design features.

BMW Individual high-gloss Shadow Line trim is complemented by the use of discreetly sporty high-gloss black for the kidney grille surround, the decorative mesh of the signature BMW M gills in the front side panels, the trim for the rear bumper covering and the exterior mirror caps.

Inside the car, an understated stripe design in BMW M GmbH colours for the seat belts, plus floor mats with special piping and “M5” logo, point to the exclusive character of the new flagship model.

A further identifying feature is the “M Competition” graphic that appears in the instrument cluster to greet the driver when it is starting up.