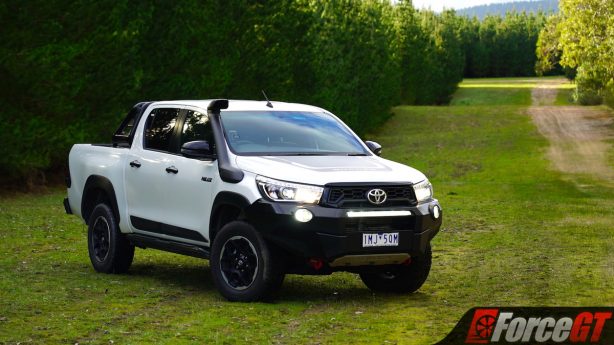 Same but different – that’s the best way of describing the Toyota HiLux Rugged X, one of the three new variants of the country’s best-selling vehicle.

Rather than giving the HiLux a traditional facelift or an unimaginative ‘special edition’ sticker pack, especially as lower grades go unchanged for 2018, the three new trim levels that sit atop the existing range aim to change the character and focus of the HiLux in their own different ways.

For those whose utes remain pavement princesses, there’s the Rogue – which, almost inexplicably, has carpet in the tray – while for those who want their HiLux coated in an almost permanent state of muddy filth, there’s the Rugged and Rugged X, the latter of which you see here. 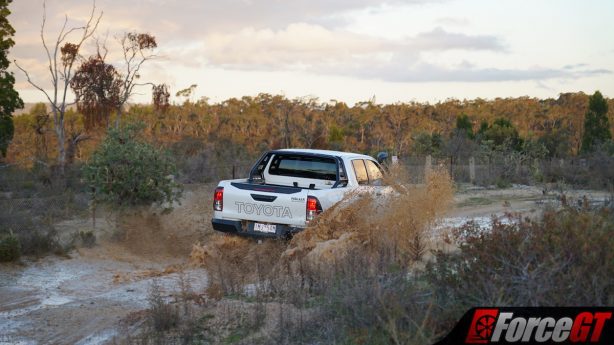 Both under the skin and on the inside, the Rugged X is more or less just a normal HiLux SR5, but on the outside, the look of the ‘Lux, as you can clearly see, has been totally transformed.

You may be wondering why Toyota would do all this, but it’s quite simple, really – Toyota’s aim with the Rugged X is to appeal to those who would normally modify their HiLuxes to get them to this state anyway, but rather than taking it off the road to have these mods done, you can simply walk into a showroom and have one already ready for you with the backing of a factory warranty.

Don’t think it all comes cheap though, as you’re looking at spending over $7,000 more on one of these than the equivalent SR5, meaning the manual Rugged X on test sits at a pricey $61,690 before on-road costs.

So is it worth the extra dough, or is it money not quite so well spent? That’s the question I set out to answer over the course of a week with the Rugged X. 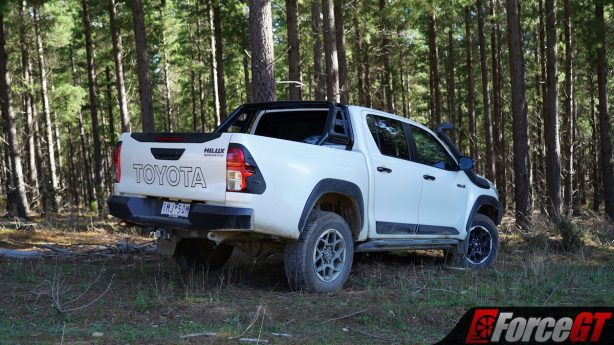 Right from the go, the Rugged X has an undeniably presence to it. There are heavy, heavy duty front and rear bars with a light bar packed into the front one, rock sliders and different wheels on the side, and a huge snorkel right on the driver’s side A-pillar, all of which adds up to give the HiLux a far more aggressive look, while all being functional too. I’d go so far as to call it not only the best looking of the three new HiLuxes, but the best looking variant in the whole range. 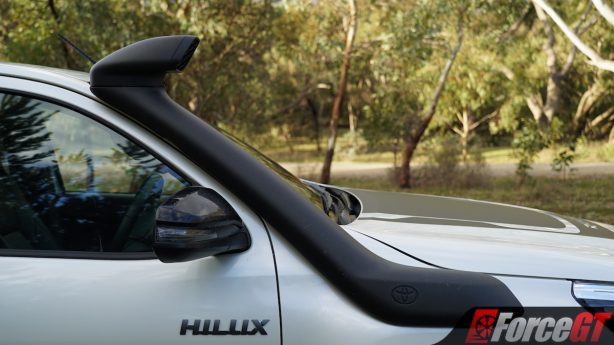 The light bar integrated into the front bumper is a particular highlight as well, offering what seems like the luminosity of a collapsed sun to illuminate your path. Handy, then, for if you’re stuck out in the bush past dark.

In addition to these other changes, the optional towing package is now made standard too for all three new models.

These modifications are also fitted to the HiLux locally at a new assembly line in Port Melbourne that will kit-out 6,000 of these a year, so even though the HiLux may be bolted together in Thailand, you can still do your bit to support the local manufacturing industry.

Other than the standard-fit rubber floor mats and the switch to turn on the light bar, the Rugged X is otherwise indistinguishable from the SR5 inside. 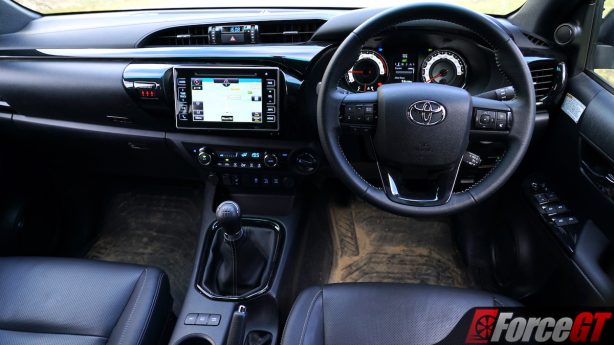 Toyota has certainly tried to bring in a bit of luxury inside with standard features like heated leather seats, satellite navigation, and auto power windows all around. However, it’s hard to escape the HiLux’s agricultural roots as it does all still feel a tad basic.

For what it’s worth, the heated seats are only single-stage too, while it’s also lacking other tech like dual-zone climate control and a digital speedo.

In addition, it also lacks a lot of the modern safety tech we’ve come to expect these days with forward collision warning, autonomous emergency braking, and blind-spot monitoring all absent. It’s hard to hold it against the HiLux, however, as almost all utes are severely lacking in this department. 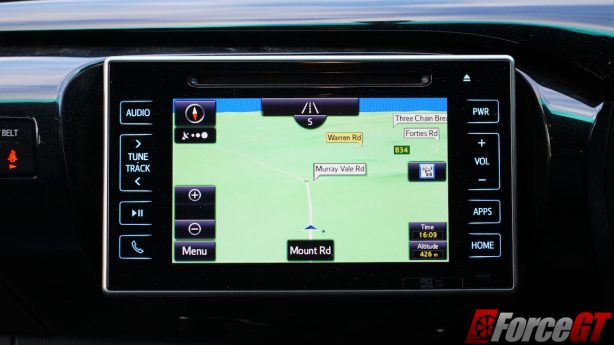 I wouldn’t call it under-equipped for a ute, as it certainly has some much-appreciated niceties, and it also feels very well screwed together in typical Toyota fashion, but it is definitely behind the eight ball for a vehicle costing over sixty grand.

Powering the Rugged X – and, indeed, all dual-cab HiLux variants – is a 2.8-litre four-cylinder turbodiesel that puts out 130kW and either 420Nm torque when backed by a manual gearbox, or 450Nm with the optional automatic. The Rugged X we had on test was equipped with the standard six-speed manual, meaning it had the lesser torque output.

All three of the new HiLux variants come standard with dual-range four-wheel drive and a locking rear diff. Manual versions of the Rugged and Rugged X also have auto rev-matching on downshifts, which Toyota brands as iMT. 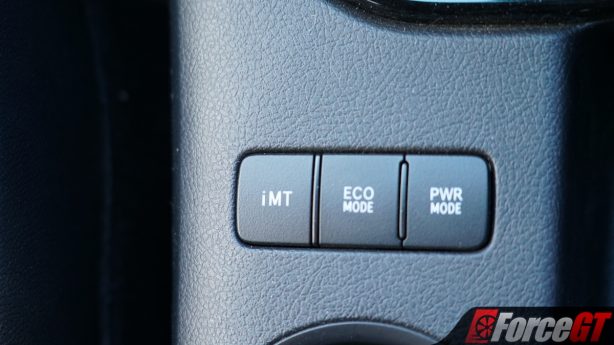 Unfortunately, the rear suspension of the Rugged X – or indeed any of the three new variants – much like the engine hasn’t been upgraded either, although the front springs are now stiffer. Regarding capability, that’s fine as there’s no real changes there, but as there’s no change to the GVM and GCM, payload drops to a mere 748kg – something to consider if you’ll be wanting one for work and play.

If you’ve driven both automatic and manual variants of the HiLux before, you’ll know that the 30Nm torque deficit the manual has working against it is far from undetectable. But while auto-equipped HiLuxes might have more punch, the manual does make it far more fun to drive.

The clutch is well-weighted and has enough travel and feedback to allow you to smooth out launches and gear changes, which is certainly a good thing as the gears on the six-speed box aren’t especially evenly spaced, with some big jumps between ratios, as well as a particularly short first gear.

Thankfully though, the shifter has a nice action to it, and if you like longer throws and really rowing your own gears, it’ll be right up your alley. The auto rev-matching on downshifts makes life a lot easier too, especially in traffic. 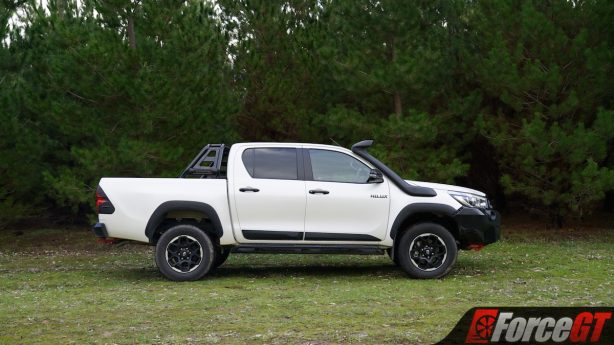 In every other respect, it’s really just like driving any other ute out there. The steering feels relatively connected as it still uses an old-school hydraulic setup, and the firm leaf springs in the rear keep body roll at bay for the most part. All in all then, it handles reasonably well, especially compared to some of its peers.

However, it does have a particularly firm ride on the road owing to stiffer front springs, feeling somewhat crashy over bigger bumps, and you do feel every minor surface imperfection with it. Also worsening its on-road manners is the wind and road noise that remains rather constant in the background at higher speeds.

There’s also a fair amount of engine noise to deal with too from the oil-burner under the bonnet, although one good noise it makes comes courtesy of the snorkel, which amplifies the fantastic induction noise. 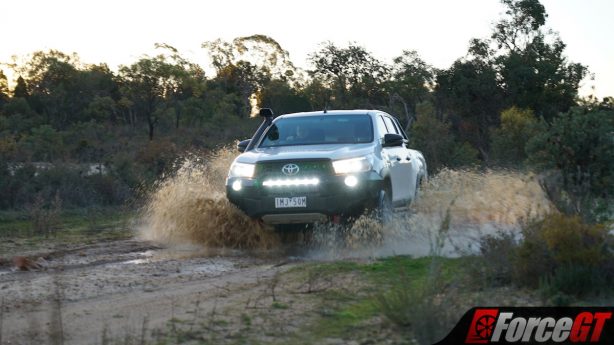 Unsurprisingly, the Rugged X is remarkably capable on the rough stuff. The moment you hit the gravel and turn the dial to divert power to all four wheels, it’s clearly in its happy place. While its on-road manners might not be the best, it comes as a surprise how well it rides on the gravel.

The shift-on-the-fly four-wheel drive system engages pretty quickly, as does the rear diff lock, meaning you’re able to get right down to business pretty quickly.

And get down to business, it certainly will. It’s certainly one of the most capable off-roaders I’ve tested recently, so what we threw at the Rugged X near Mount Crawford in the Barossa Valley, as well as on our usual testing trails littered around the Adelaide Hills, was nothing to it. 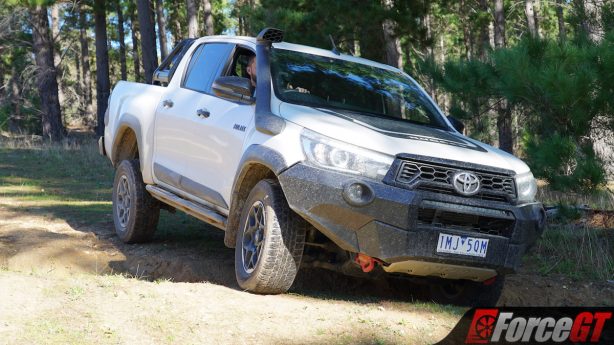 The purposeful design all makes sense and the Rugged X struggles with nothing. It has plenty of traction thanks to those chunky tires, meaning it feels confident – and confidence inspiring – through mud, water, on gravel, and over rocks.

The impressive approach and cornering angles of 28 and 49 degrees respectively from the new heavy duty bumper and the HiLux’s good ground clearance, while all further enabling its off-roading abilities, also meant we didn’t inflict any damage on it.

There’s a surprising amount of suspension articulation too, meaning we saw all four wheels staying grounded over awkward terrain. This is the real secret to the off-roading ability of all HiLuxes as you’re rarely unable to put the power down to all four wheels. 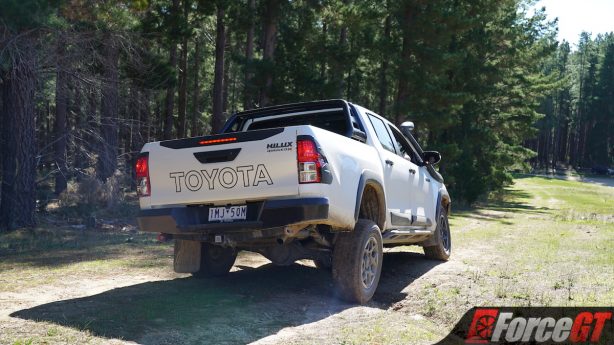 All HiLuxes offer a three year, 100,000km warranty that is starting to fall behind the pack and expectations these days, and it’s the same story for the service intervals that are set at just six months or 10,000km. Thankfully though, servicing costs are capped to just $240 a pop for the first six visits.

The Rugged X did better on fuel than we initially expected as well, with an exact fuel economy measurement of 9.0L/100km after around 600km of mixed driving, which compares relatively well to its seemingly optimistic 7.9L/100km claim. 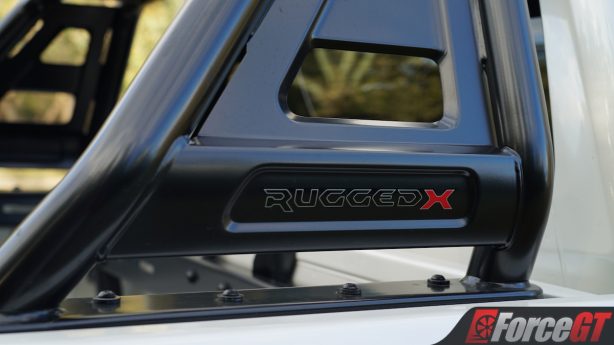 While far from a radical redesign, the Rugged X improves on the standard HiLux’s off-roading ability with tweaks to the design that make it more than fit for the worst Australia has to throw at it, while also making it look better and more aggressive too.

However, it’s far from the most civilised of utes on the road, and it becomes clear very quickly that it’s far more at home in the bush than in the big city.

The question of value does arise considering the premium over the standard HiLux SR5 and the short service intervals and warranty. I’m not 100 per cent convinced that it’s worth seven grand more than the SR5 – if it was under the $60,000 threshold I might say something different – but I do think those in the market for a thoroughbred off-roader will come away feeling very happy with one of these.