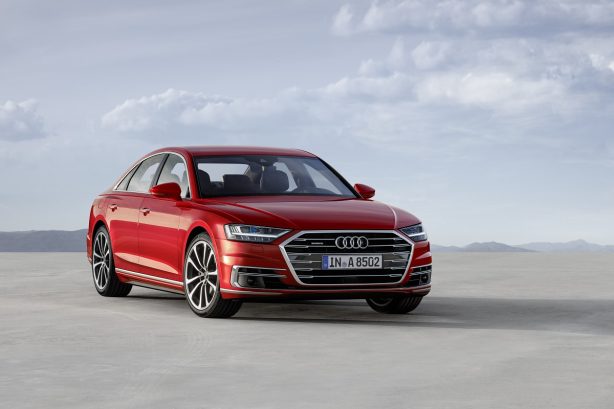 The new Audi A8 has officially made its world debut at the Audi Summit in Barcelona. Now in its fourth generation the 2018 Audi A8 utilises the company’s MLB platform, first used in the current generation Q7 seven-seat SUV. The new platform allows significant weight savings and application of alternative powertrains such as battery electric.

With a new design language, the new A8 also debuts the next-generation touchscreen operating concept and new hybrid and electric drivetrains. The A8 is also the first production Audi developed with extensive self-driving capabilities.

the new A8 adopts styling elements from the Audi Prologue concept (below) including the company’s new single frame trapezoidal front grille, sleek headlights and bold lines. It measures 5.17 meter (17.0 ft) long in the standard version. The A8 L has a 13 centimeter (5.1 in) longer wheelbase.

The flagship model proclaims its identity both day and night, drawing on both the striking HD Matrix LED headlights with Audi laser lighting, and the LED light strip combined with OLED technology rear lights. 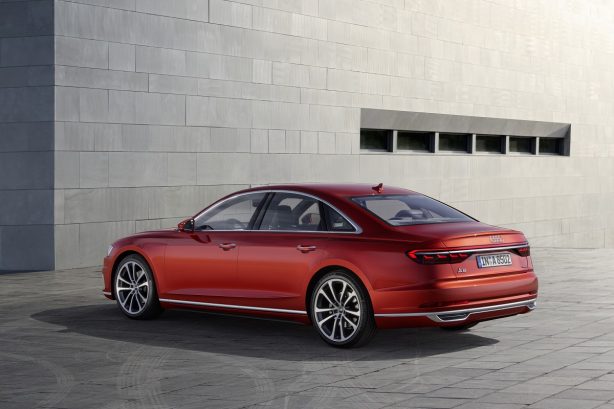 The A8’s interior resembles a lavish, spacious lounge. Compared to the model it replaces, it has grown substantially in length in both body versions.

While all occupants no doubt enjoy the ultimate in luxury while travelling in the new A8, the classiest seat in the new Audi flagship is in the rear right – the optional relaxation seat in the A8 L that comes with four different adjustment options and a footrest. In this seat, the passenger can warm and massage the soles of their feet on a unit with multiple settings incorporated into the back of the front-passenger seat. The new comfort head restraints complete the experience. 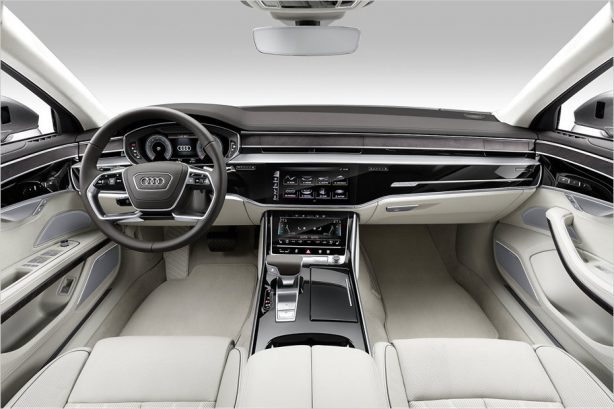 The rear passengers can also control an array of functions such as ambient lighting, the new HD Matrix reading lights and seat massage, plus make private phone calls, via a separate operating unit. The rear seat remote, with its OLED display as large as a smartphone, is a removable unit housed in the center armrest.

The new Audi A8 progresses in the digital age with a radically new operating concept. It does away with the familiar rotary pushbutton and touchpad of the predecessor model. The instrument panel is kept largely clear of buttons and switches. At its center is a 10.1-inch touchscreen display which, when off, blends almost invisibly into the high-gloss black surround thanks to its black-panel look.

The user interface appears as soon as the car is opened. The driver controls the infotainment system with fingertip control on the large display. They can use a second touchscreen display on the center tunnel console to access the air conditioning and comfort functions as well as make text inputs. When the driver activates a function in the upper or lower display, they hear and feel a click by way of confirmation. The glass-look operating buttons respond in the same way. 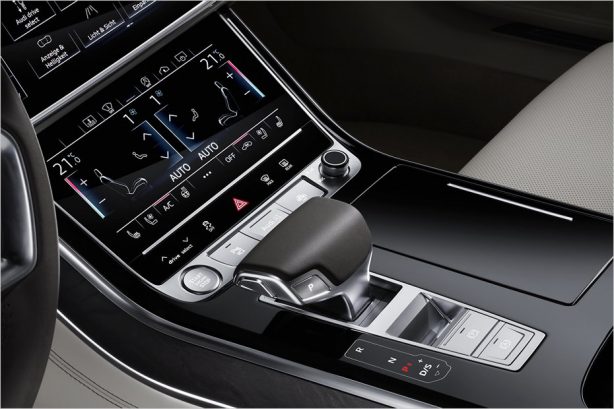 According to Audi the combination of acoustic and tactile feedback along with the use of common touch gestures such as swiping make the new MMI touch response especially safe, intuitive and quick to use.

The A8 can also engage in intelligent conversation. The driver can activate an array of functions using a new, natural form of voice control. Information on destinations and media is either available on board or is delivered from the cloud at LTE speed. The extensive Audi connect range also includes traffic sign recognition and hazard information.

The extensively optimised navigation is another new feature: It is self-learning, based on the route just driven. This provides the driver with intelligent search suggestions. The map also incorporates highly detailed 3D models of major cities.

The Audi AI traffic jam pilot in the A8 can take charge of driving in slow-moving traffic at up to 60 km/h (37.3 mph) on freeways and highways where a physical barrier separates the two carriageways. The system is activated using the AI button on the center console.

The traffic jam pilot manages starting, accelerating, steering and braking. The driver no longer needs to monitor the car permanently. They can take their hands off the steering wheel permanently and, depending on the national laws, focus on a different activity that is supported by the car, such as watching the on-board TV. As soon as the system reaches its limits, it calls on the driver to take back control of the task of driving. 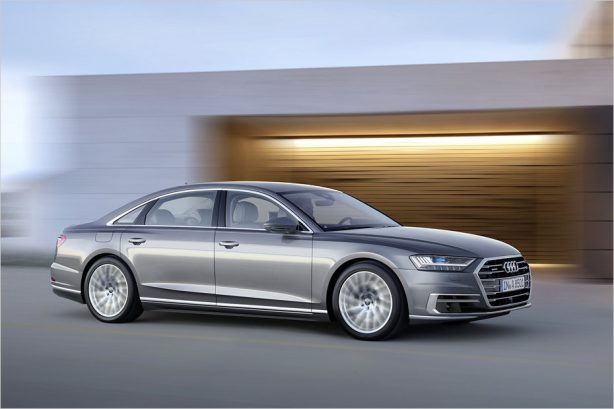 The Audi AI remote parking pilot and the Audi AI remote garage pilot autonomously steer the A8 into and out of a parking space or a garage, while the maneuver is monitored by the driver. The driver need not be sitting in the car. They start the appropriate system from their smartphone using the new myAudi app. To monitor the parking maneuver, they hold the Audi AI button pressed to watch a live display from the car’s 360 degree cameras on their device.

All five engines operate in conjunction with a belt alternator starter (BAS), which is the nerve center of the new 48-volt electrical system. This mild hybrid technology (MHEV, mild hybrid electric vehicle) enables the car to coast with the engine switched off, and to restart smoothly. It also has an extended start/stop function and an energy recovery output of up to 12 kW. The combined effect of these fuel saving measures is said to bring about 0.7 liters per 100 kilometers in real world fuel economy savings. 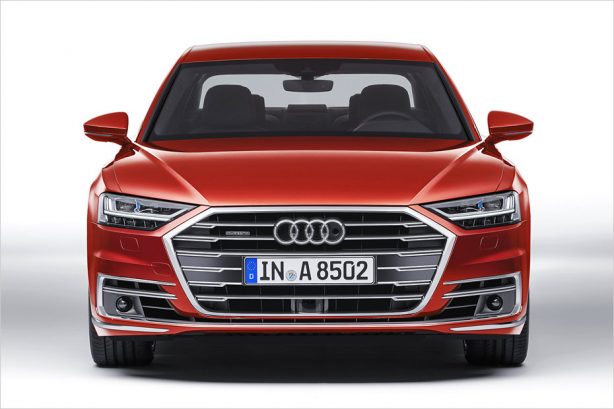 The A8 L e-tron quattro plug-in hybrid drive will follow at a later date. Its 3.0 TFSI engine and electric motor combine to produce 330 kW (449 hp) of power and 700 Nm (516.3 lb-ft) of torque. The lithium-ion battery stores enough power for about 50 kilometers (31.1 mi) of electric driving. It can optionally be charged by Audi Wireless Charging. A pad in the garage floor transfers the power inductively to a receiver coil in the automobile with a power output of 3.6 kW.