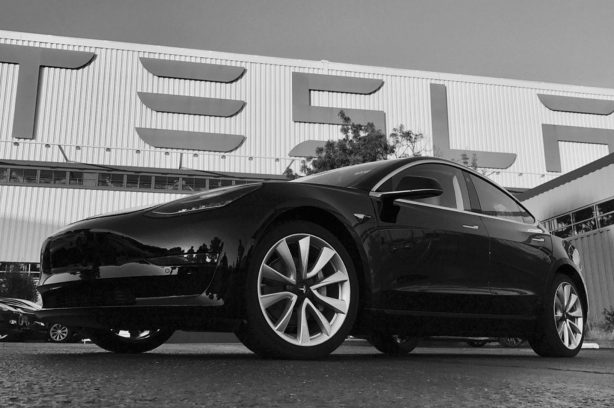 The long awaited Tesla Model 3 has finally rolled off the factory floor as production of the most affordable Tesla goes into full swing. CEO Elon Musk was quick to share photos of his latest pride and joy on social media, posting the production number one Model 3 in black and white on Twitter.

The photo was taken outside of Tesla’s factory plant in Fremont, California and shows the front quarter view of the compact electric car.

A few hours later he posted a second photo on Twitter, this time in full colour with the sleek black Model 3 captured in a side profile view. The setting sun reflects warmly against the sedan, with the Tesla factory and surrounding foothills visible in the background.

Tesla has previously announced that the first 30 owners of the Model 3 will be invited to a handover party on the 28th of July as production continues to increase exponentially. Production should see 100 cars completed in August increasing to 1,500 in September with predictions that by December 20,000 model 3’s will be produced per month.

Estimates put the Model 3’s driving range at around 345 kilometers while performance from zero to 96 km/h (60 mph) will sit at a respectable 5.6 seconds. The lower $35,000 USD (expect $60,000 AUD) price of the Model 3 and high volume production capacity will no doubt see their numbers on the road exceed that of Tesla’s higher specced yet rarer offerings once launched locally in 2018.