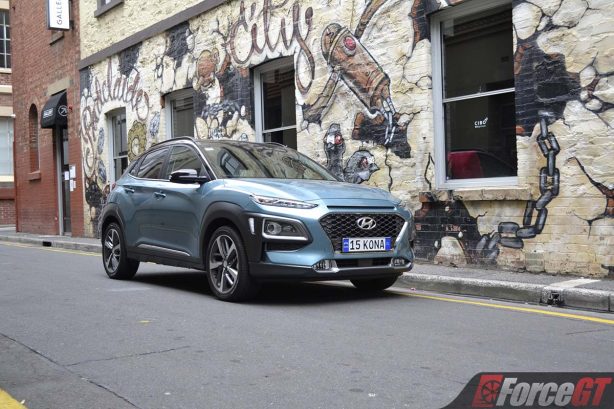 Some of my friends quipped as I pulled up in the all-new Hyundai Kona. The fact is, they are right. Three of the four cars I tested in the last month were SUVs, and this one is fashionably late to the party, just as I was to my friend’s.

But being late to a party doesn’t mean you are left out if you arrive in style, which the Kona has in spades. Donning one of the most daring designs to come out of Korea, the Kona makes a conspicuous entrance watched on nervously by established rivals such as the Toyota C-HR, Mazda CX-3 and Honda HR-V.

Like Toyota’s C-HR, the Kona’s youthful design and compact dimensions are designed to appeal to younger urban buyers looking for a funky runabout that could tackle the occasional mud tracks or unsealed roads. 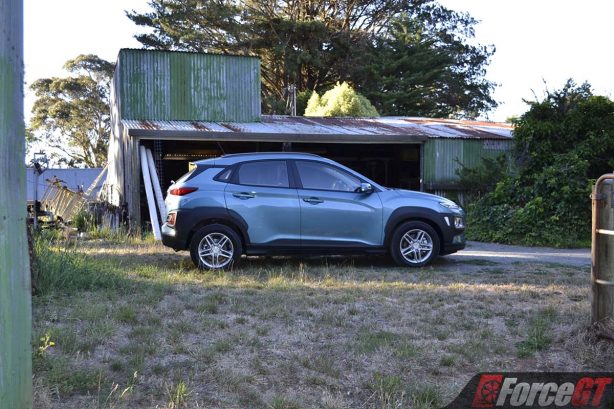 Available in two power and drivetrain configurations, the 2.0-litre aspirated four-cylinder petrol is matched with a 6-speed automatic driving the front wheels, while the 1.6-litre turbocharged petrol is paired with a 7-speed dual-clutch transmission powering all four wheels.

Each powertrain is offered with three trim levels, starting with the Active before stepping up to the Elite and range-topping Highlander. 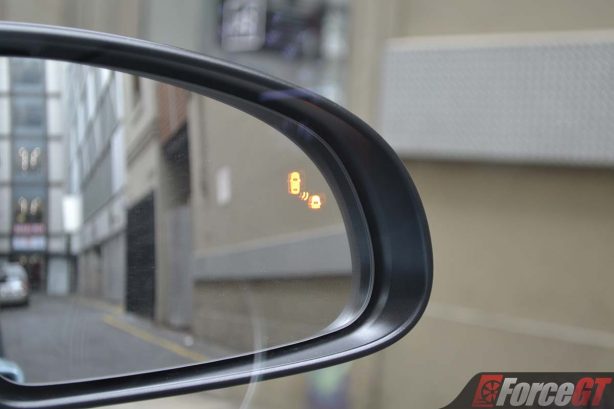 There’s not much missing, except the odd absence of adaptive cruise control although only the Toyota C-HR comes standard with the feature amongst the Kona’s rivals.

Whilst a comprehensive spec sheet entices, it’s how the car looks and feel that draw crowds into the showroom and the Kona doesn’t disappoint. 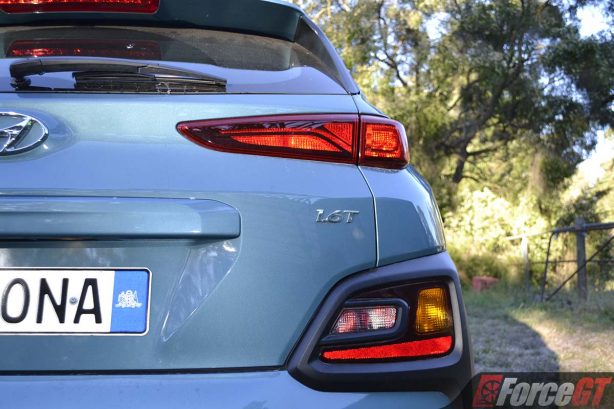 The first thing one notices about the Kona’s bold design is its inverted face. Like the Jeep Cherokee and Citroen C4 Cactus, the Kona’s headlights sit below the car’s LED daytime running lights and are flanked by Hyundai’s latest cascading grille.

Another standout design element is the chunky grey wheel arches that flow into the front and rear bumpers to wraparound the head and taillights, giving the small SUV a tougher stance.

At the back, those slimline taillights (LED in the Highlander) visually stretch the Kona’s width to give the car a squat look and together with decent proportions, the little Hyundai is confidently stylish.

Inside however, the interior is a little more conventional but no less fashionable with a 7-inch infotainment screen that stands proud of the dashboard. General ergonomics are good although we question the location of the engine start button which is hidden from sight behind the left hand steering wheel spoke. The temperature control dial is also located on the passenger side, making it a bit of a stretch to reach for the driver. 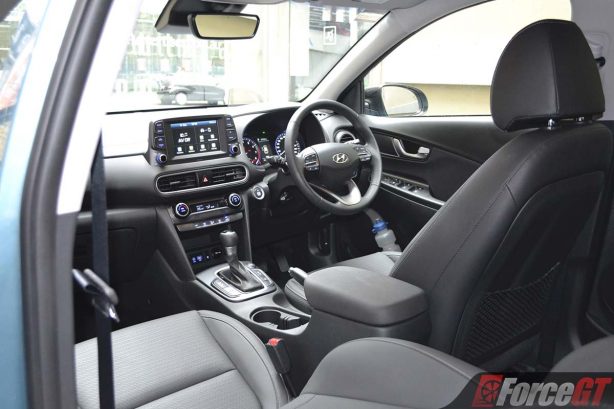 On the plus side, the seats are comfortable although the pews in the Active seem to feel softer compare to the leather (artificial) seats in the Highlander, lacking proper support after a while.

The Kona’s diminutive dimensions mean legroom is relatively tight at the back even for shorter occupants. Those with children should brace themselves to lots of back seat kicking, as well (because they are close enough). Thankfully, the seat backs are made of durable plastics.

Like most in its class, rear seat air vents have also gone AWOL, but what I like is the extendable sun visors which is super effective in blocking out the summer sun and should be adopted by other vehicles. All round driving visibility is also good.

Despite its pint-size stature, the Kona boasts a larger boot space than the popular CX-3 (up 97-litres) at 361-litres, but trails the C-HR’s 377-litres. This expands to 1,143 litres with the rear seats folded. 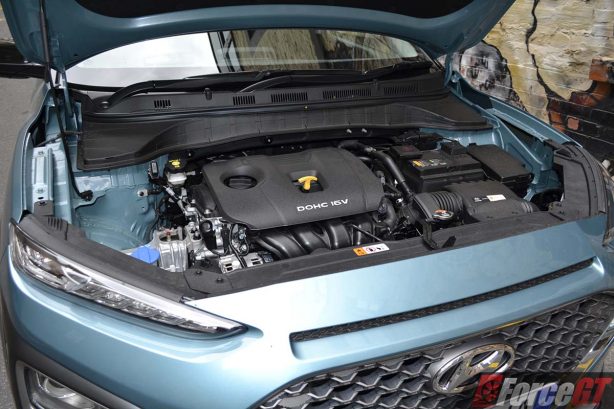 We tested both power and drivetrain configurations and found the 2.0L lacking in punch and needs a serious jab of throttle to move things along. It also gets vocal at above 3,000rpm, taking the shine off the relatively refined cabin.

The 1.6T is more immediate and should be the pick if budget allows. The 6-speed twin-clutch isn’t as fast as those from VW Group but matches the engine well, picking the right gear almost every time and masking any turbo lag in the lower reaches of the rpm. Like early examples of VW’s DSG, there is slight jerkiness at crawling speeds but it isn’t a concern once you are used to it and is much better than Hyundai’s earlier attempts.

Unlike some rivals, there are no paddle shifters in the Kona and you are limited to using the gear lever should a little more control and engagement is desired. Sadly, like so many others, the ‘up’ and ‘down’ is the wrong way around from the more intuitive way of pushing up to downshift and vice versa; zapping driving enjoyment somewhat.

The Kona inherits its road manners from the accomplished i30 with a good balance between ride and handling. It feels agile and fun, and our 1.6T Active’s smaller diameter and donut-like wheels (205/60R16 Hankook Kinergy Eco2) give the car a more compliant feel over bumps without sacrificing handling too much. The car feels tight down and confident around corners, thanks in part to its AWD traction. 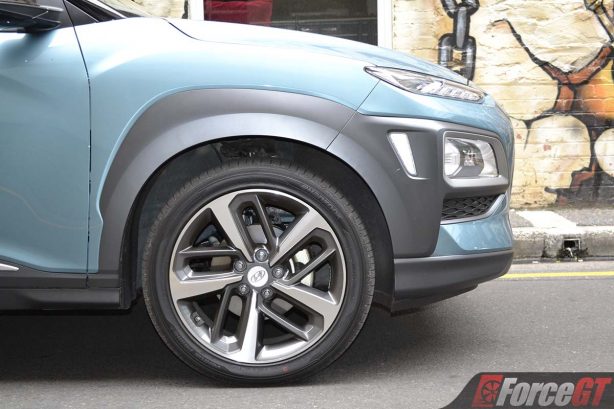 There’s a Drive Mode Select on both variants, allowing the driver to choose between ‘Comfort’, ‘Eco’ and ‘Sport’ modes – each varying the transmission mapping, steering weighting and throttle response.

The Kona’s biggest flow though, is its wooden steering that is too eager to self-centre. While Sport mode adds some weight for better precision, it doesn’t bring any additional feel.

On the plus side, brake performance is good and there’s good brake pedal feel, too. 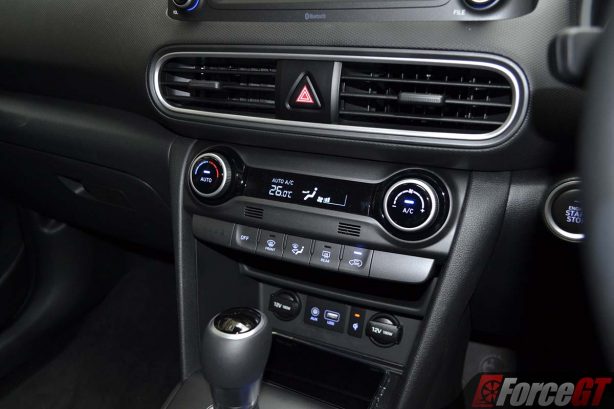 The Kona’s build quality is generally good, with a robust feel to all switchgear although there was some squeaking noise from the rear suspension of our Active test car with 4,000km on the clock, and rattle from the driver’s door (sounds like the lock banging against the door) in our 2,300km Highlander tester.

The cheaper model also misses out on better quality plastics compared to the Highlander, with lower rent hard plastics all around, including unpadded armrests.

Other annoying little niggles are the front wipers leave a small uncleaned island in the middle of the screen where they overlap and the cruise control can vary wildly up to 8km/h above its set speed. 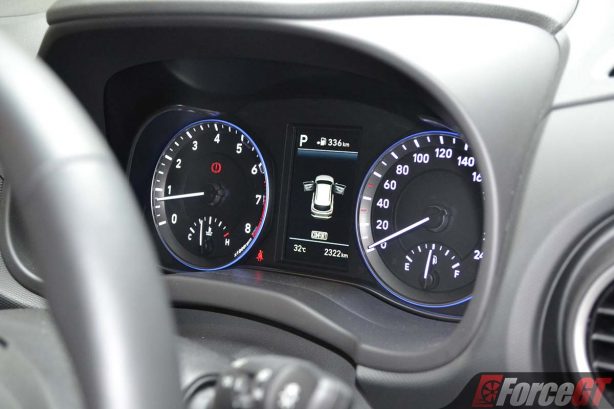 Unusually for a modern car, the Kona isn’t equipped with engine start/stop technology. Nevertheless, over a mix of urban and freeway driving with a few challenging country roads thrown in in between, we recorded a respectable 8.1L/100km combined average for the 1.6T, and 8.6L/100km for the 2.0L. 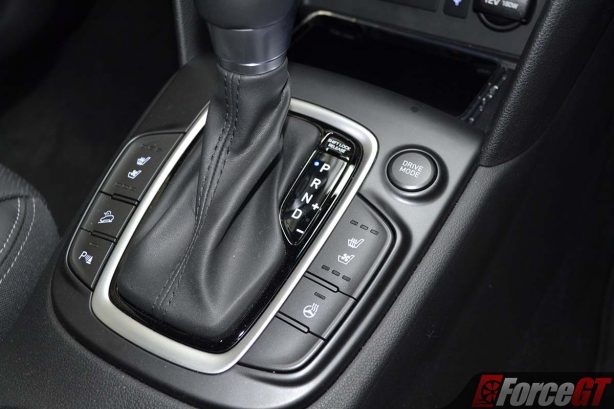 While the Kona is relatively well equipped (see above), we question the omission of embedded satellite navigation on the entire rang with users limited to the data-zapping maps on their smartphones.

Other gripes include the deletion of ‘Auto Up’ on the driver’s window in the entry-level Active and power windows backlighting for the passenger windows on all variants.

Refreshingly funky styling, decent dynamics, and enviable reliability… the Kona might be late to the party, but it certainly makes an impression. And a good one at that.

It’s another winner from Hyundai!