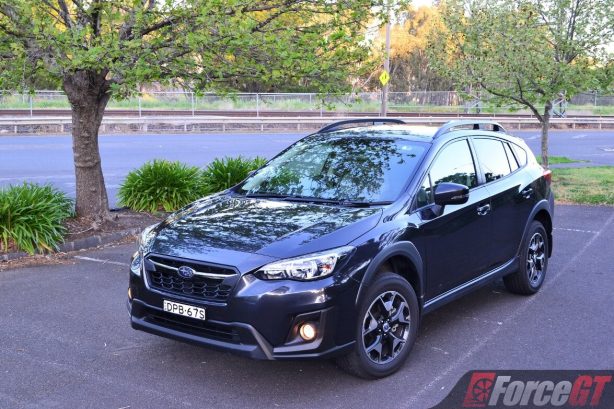 When Subaru launched the first generation XV compact crossover in 2012, it had only the Mitsubishi ASX and Nissan Juke to call rivals. Fast forward to 2017, and now in its second generation, the new XV is faced with an explosion of new entrants that have come into one of the fastest growing passenger car segments in Australia, with key rivals including the Toyota C-HR, Mazda CX-3 and Honda HR-V.

With no fewer than 10 players in the segment, competition has never been so intense. As one of the pioneers in this space, the nameplate is built on a reputation of versatility, all-wheel drive traction, safety and reliability. The formula proved to rhyme well with active singles, young couples and small families. With the new model, Subaru has reduced entry-level pricing and added specification, with the four-tier line-up now kicking off at a sharp $27,990 excluding on-road costs.

Can the new XV mimic its predecessor’s success? We find out. 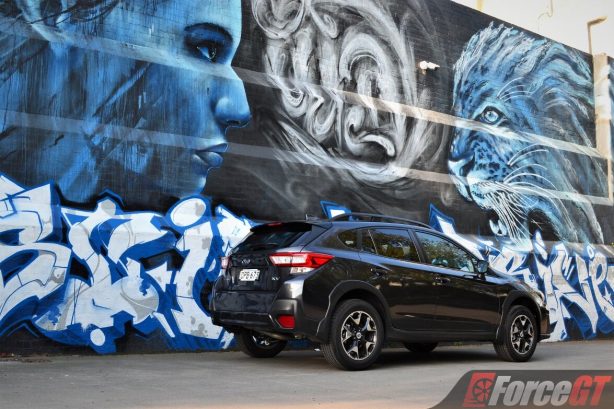 Based on the Impreza hatch, the new XV adopts an evolutionary design over the previous model, looking more like a major facelift than all new, though according to Subaru the two generations share no identical panels.

It’s a good looking crossover, with a revised front fascia featuring a more purposeful new grille flanked by sharper looking headlights. Bold lines run along the sides, joining the rugged-looking plastic cladding around the front and rear wheel arches. At the rear the taillights are carried over from the Impreza hatch, complemented with a beefy rear bumper.

Unlike its softer looking rivals, the XV boasts a tougher, more off-road-ish design that should appeal to adventure seekers. 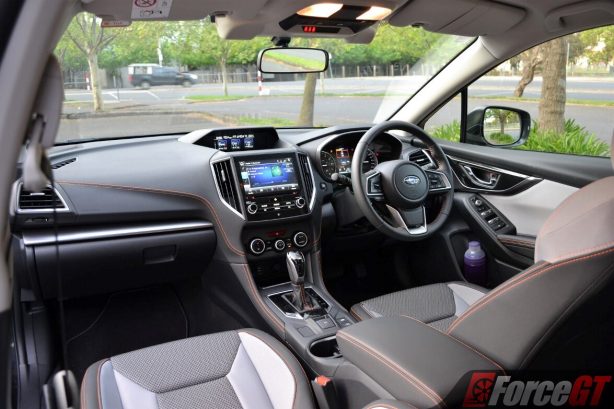 While the new exterior has not deviated much from before, the interior is totally new and what an impressive effort. It’s now looking much more modern and upmarket, with a clean, uncluttered and well thought out dashboard trimmed in soft-to-the-touch surfaces and quality carbon-fibre or aluminium-look inserts (depending on model grade).

All switchgear are ergonomically placed and have a nice tactile feel to them, though there are too many buttons on the steering wheel which got us confused even after a week behind the wheel. Elsewhere, the twin-screen set up still resembles that in the previous model, but they are now larger and of much higher resolution and clarity, not to mention vastly better graphics.

The seats are some of the best in the business, offering great comfort and support, and even in base fabric trim they look good in their two-tone colour scheme. Visibility from the driver seat is decent with excellent A pillar visibility thanks to the small window bracket just fore of the side mirror. 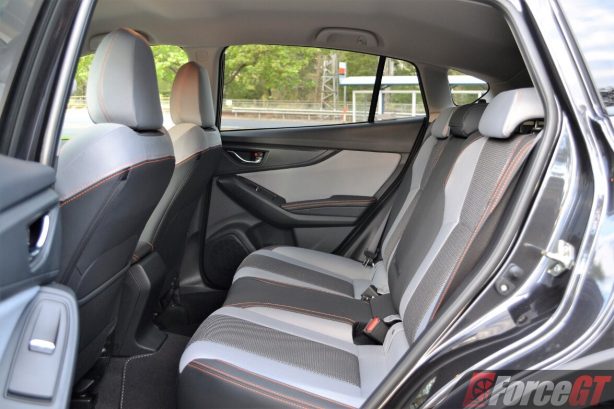 Being one of the longer crossovers in its class, occupants will enjoy generous legroom and headroom no matter if they are seated in the front or back, though the one seated in the rear middle seat will not appreciate the raised center tunnel in the footwell which is rather high to accommodate the driveshaft for the all-wheel drive.

On really hot sunny days, the lack of rear air-con vents would also surely draw a few complains from sweaty rear passengers. That being said, the XV’s air-con unit is one of the more powerful ones we have sampled.

Getting children in and out of the rear is easier than ever due to the wide opening rear doors. The front doors, however, lack puddle lamp. 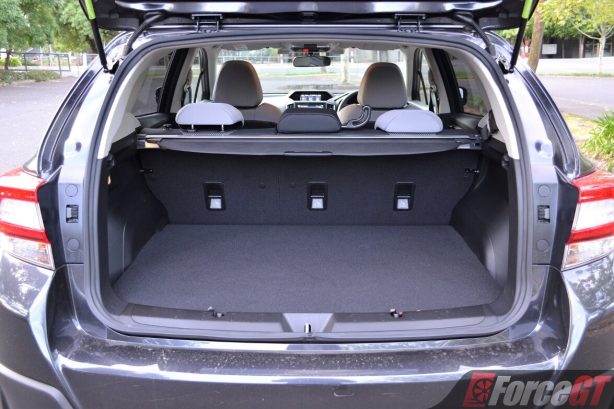 Further back there’s a usefully flat boot complete with cover which increases from 310 litres up to 765 litres once the rear seats are folded down. Surprisingly, the boot in the XV is actually smaller than its Impreza hatch sibling (345 litres / 795 litres) due to the high boot floor. With the seats up, the XV’s boot space eclipses that of the Mazda CX-3 (264 litres) but trails the Toyota C-HR (377 litres), Hyundai Kona (361 litres) and Honda HR-V (437 litres).

The result is sure-footed handling in all weather conditions and road surfaces. Grip level is phenomenal, and when paired with the sharp steering, brake-based torque vectoring and rigid chassis, the XV serves up a remarkably assuring drive, with well controlled body roll and composure through corners.

While it’s still not quite as fun to drive as the CX-3 or C-HR, the new XV feels quite a bit more agile than before, responding better to driver’s inputs. It brakes stronger, too, with a firm and progressive feel through the pedal. 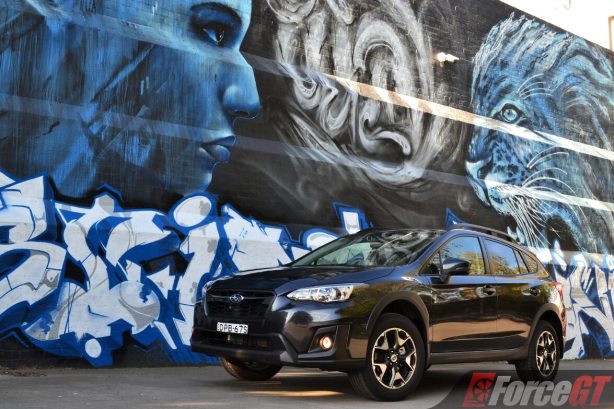 What lets the driving experience down is the normally aspirated engine, which feels rather lethargic until you pile on the revs. It is a dependable unit but lacks the low-end torque of its turbocharged rivals. It’s louder than we’d liked when worked, though when left cruising it’s very smooth and refined. The auto idle start/stop is also not the smoothest we have sampled, kicking in with a jolt that takes away much refinement. A better engine would be Subaru’s new 1.6-litre turbo four found in the entry-level Levorg but we were told that unit sadly wouldn’t fit under the bonnet of the XV.

While CVTs have a nasty reputation of diluting the driving feel with the ‘rubberband effect’ and emitting unpleasant drone, we are glad to report that the XV’s CVT suffers from neither. In fact, it’s so silky smooth in all proceedings that we actually prefer this CVT over a conventional auto for day to day driving.

When you’re enthusiastic on the throttle, the CVT will still send revs soaring but it’s better controlled and you feel it’s doing its best of replicating a conventional stepped torque converter auto. The virtual “steps” can be operated by the paddle shifters behind the wheel. The transmission is also quick to react to throttle input, kicking down swiftly when you ask for more power. 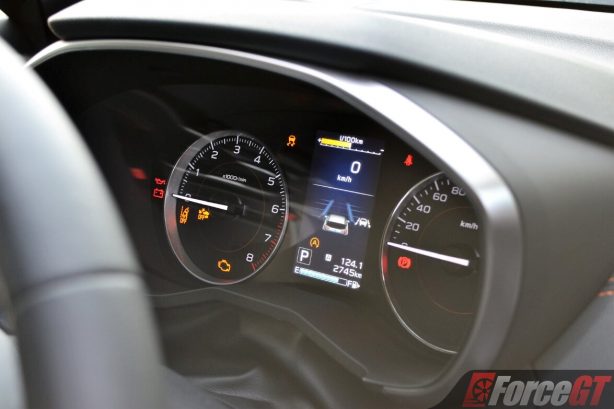 All variants bar entry-level come with Subaru’s Eyesight system, which uses two cameras to scan the road ahead for pedestrians and other vehicles and apply the brakes if the driver fails to. The system is also able to detect a vehicle’s brake lights, which explains why the radar cruise control is one of the best we have tested, operating more akin to a real experienced human driver without the ‘nervousness’ so often found in such systems.

Equipped with permanent all-wheel drive (not on-demand) you can actually take the XV off road and it will be more than happy to plough through most sand and gravel tracks. Improving the XV’s versatility and off-road prowess is the new X-Mode which works with the hill descent control to give drivers greater confidence by maintaining low speeds on rough terrain and automatically controlling braking on downhill slopes.

The ride around town is busier than we’d liked, with some harshness evident in low speed and on broken surfaces. It settles to a much smoother ride when speed climbs. Road and wind noise is also well suppressed.

Subaru’s are generally very well made and the Japan-sourced XV is no exception. All panels are properly aligned, while the doors close with a reassuring thud, giving you a sense of quality.

The XV further impresses with a premium-look interior that is impeccably built. Cabin materials are generally good, so is the stitching on the dashboard, door trim and seats. The instrumentation panel looks up market and the driver information display is bright and clear. The entire cabin presentation, especially in the upper grade models, is a big step up from before and now rivals the best in class. 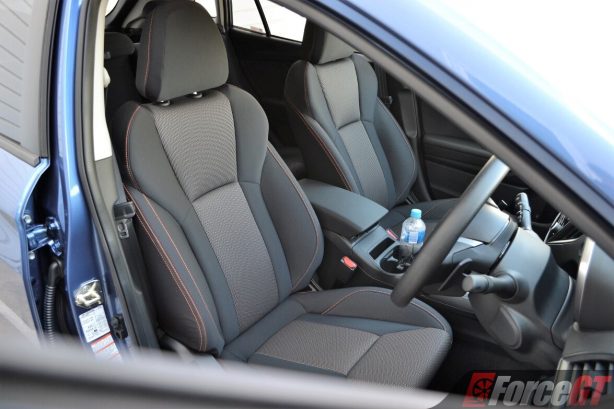 All models across the new XV range bar the mid-spec 2.0i-L see a slight drop in pricing. With added features, the entry-level XV 2.0i checks in at $27,990 excluding on-road costs – $1,250 less than the equivalent superseded model.

Subaru has also extended the new XV’s service interval, now offering a 12,500 kilometre/12-month Capped Price Service program (CPS), following the servicing trend set by the new Impreza. This means servicing costs in the first three years of ownership drop from $2,125.76 to $1,298.19 – a 38.9% saving. 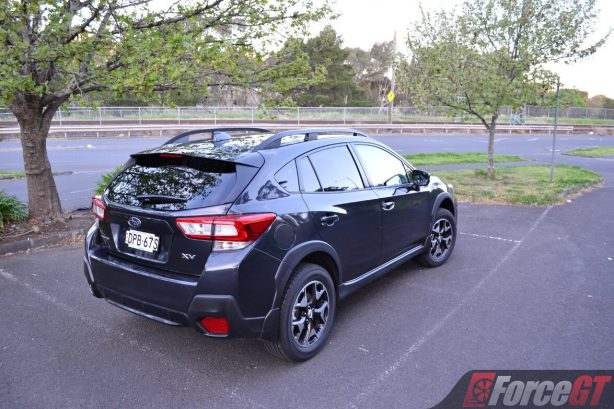 Fuel economy is rated at 7.0L/100km on the combined average which isn’t too far off our real world test figure of 8.0L/100km. It’s not the most fuel efficient around town but on the freeway the XV is relatively frugal, sipping around 5.0L/100km.

Even in base trim, the XV is comprehensively equipped. In fact, the entry-level 2.0i is a very livable package that is far from poverty pack. All-wheel drive and torque vectoring are standard, while inside it gets well presented cloth seats, rear view camera, tyre pressure monitoring system, 7-inch infotainment touchscreen with a decent-sounding six-speaker stereo, Bluetooth and USB connectivity and Apple CarPlay and Google Android Auto compatibility.

From 2.0i-L and up, you get dual zone climate control, 8-inch touchscren and Subaru EyeSight driver assist which includes forward automatic emergency braking (AEB), lane keep assist and active cruise control. Opting the 2.0i Premium also gets you a sunroof and factory fitted satellite navigation.

Subaru’s infotainment interface still looks a little outdated compared to the rest of the competition and the smaller 7-inch unit in the base 2.0i model is annoyingly slow and unresponsive.

The second generation Subaru XV remains a sensible choice for those looking for a dependable compact SUV with a roomy cabin, capable all-wheel drive hardware (which comes standard across the range) and comprehensive list of safety features. It’s also better to drive than ever thanks to the new generation chassis and drivetrain improvements. But an aging engine that lacks low-end torque and top-end refinement may turn some buyers away to rival camps.

Subaru has a rich heritage in SUVs and all-wheel drives, but the company is relatively …