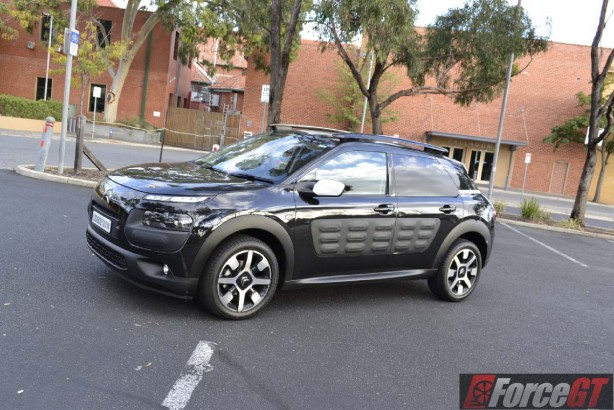 In most parts of the world, a Cactus is known as a hardy desert plant with short little spikes. In Australia however, “cactus” is also a slang word for “dead, useless or broken”.

Not a wise name for its new car then, for a brand still struggling to improve its reliability image.

However, silly name aside, there’s a lot to like about the new Citroen C4 Cactus. 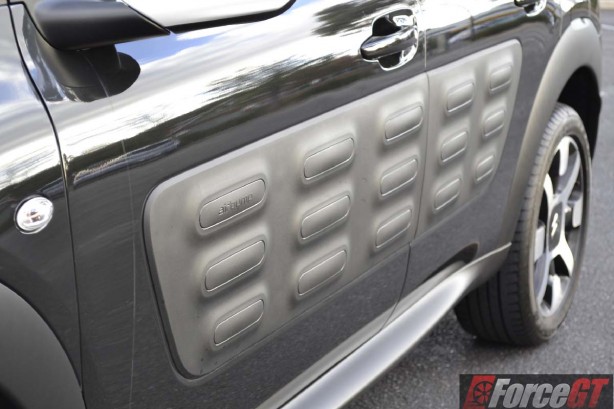 Against a sea of almost ubiquitous small high-riding SUVs, the C4 Cactus stands out. Much like the thorns on a cactus, thanks to the soft pads on its flanks.

And in the same manner that a cactus plant uses its spikes for protection, the C4 Cactus’s pads are also a defence mechanism that is cleverly integrated into the car’s unconventional, but innovative design.

Like packaging bubble wraps, the ‘Airbumps’ – as Citroen calls them – are filled with air to protect the sides of the car from wayward shopping trolleys or callous car doors. 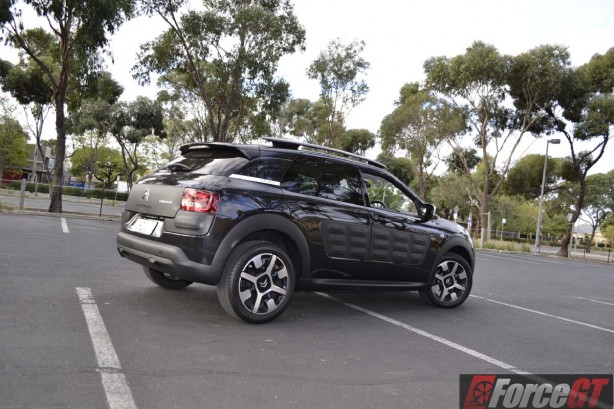 Each Airbump comprises a stiff plastic surface and a second softer surface. The air encapsulated between the two cushions soaks up any impact and protect the bodywork from minor collisions. Citroen claims the Airbumps can withstand impacts at speeds of up to 4km/h.

The company has also engineered the Airbumps for easy replacement. They are fixed to the doors by means of plastic clips secured by a vandal-proof screw accessible only from the interior, but without having to remove the trim panel. Citroen says the materials used for making the Airbumps are resistance to ultra-violet rays and micro-scratches, as well as capable of springing back to its initial shape.

And like other style-led vehicles, the is a significant range of personalisation options for the C4 Cactus, too, including 4 colour options for the Airbumps, coloured roof rails and door mirrors, colour body highlights and so on. 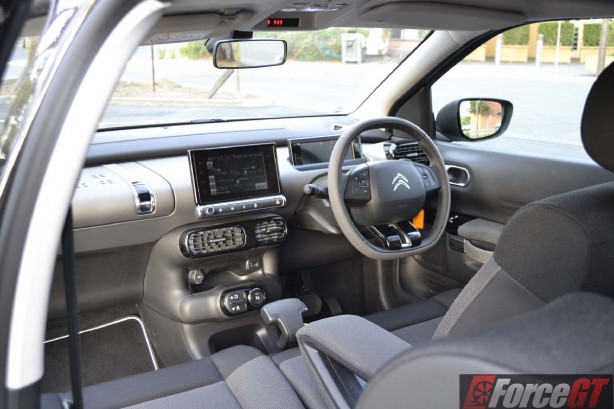 The interesting design features continue inside the cabin, most notably the stylish glove box lid that seems to be inspired by an expensive Louis Vuitton trunk, and the aircraft-style handbrake lever (diesel variant only).

In order to create the top-opening lid for the glove box, Citroen has ingeniously moved the front passenger airbag up to the roof, just under the headlining aft of the windscreen. The comma-shaped airbag is said to offer the same level of protection as a conventional dash-mounted airbag, while enabling the dashboard design to be slimmer. Its volume has also been increased to 120-litres to cover the touchscreen area. 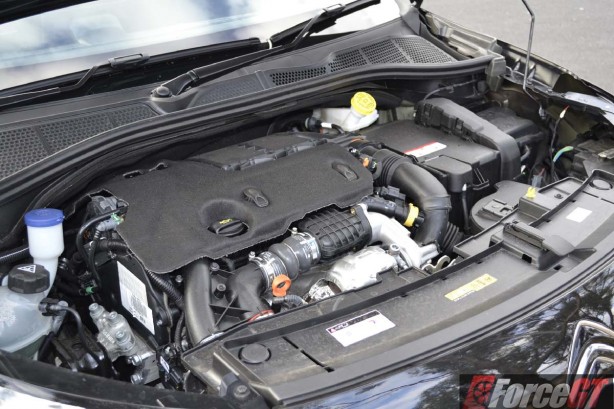 Instead, the two-model range is powered by either an 81kW/205Nm 1.2-litre PureTech three-cylinder turbo-petrol, or a 68kW/230Nm 1.6-litre four-cylinder turbo-diesel, both connected to the front wheels – the former via a 5-speed manual, while the latter uses an annoying 6-speed semi-automatic transmission (more on this below).

We only sampled the 1.6-litre turbodiesel, which is expected to be the more popular model. It is generally relaxed and refined, with good low-end torque and a muscular mid-range. Its stop/start system also fires up quickly when moving away from the lights.

It’s a pity Citroen Australia, in its worldly wisdom, decided to offer the diesel only with a robotised six-speed semi-automatic that is annoyingly jerky; all in the name of fuel efficiency (and for a massive 0.2L/100km!).

Each upshift is accompanied by an annoying and confidence zapping “torque braking” hesitation, as though the engine is about to stall. Citroen says backing off the throttle slightly can reduce the effect but it is completely counter intuitive, especially when there’s only a small gap in the traffic you are merging into. Using the flappy paddles on the steering wheel doesn’t help whatsoever.

Don’t be fooled by the C4 badge in its name, either, because the Cactus isn’t a C4 at all. It is based around PSA Group’s ‘PF1’ city car platform that underpins the smaller Citroen C3, although its wheelbase is closer to the C4’s.

Citroen says the Cactus would have been 200kg heavier if it had been built on the larger ‘EMP2’ platform. As a result, the car tips the scale at just 1,055kg, despite its generous proportions. 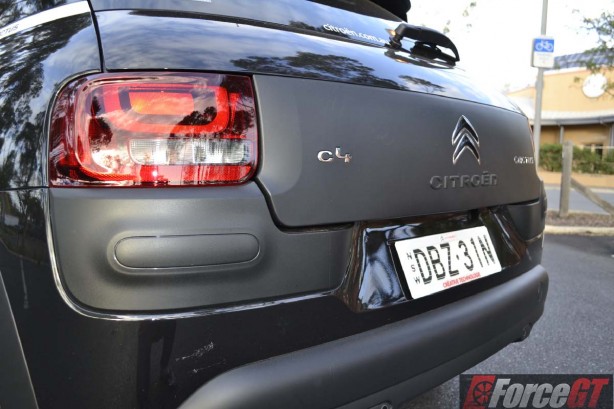 The C4 Cactus rides on MacPherson front suspension and a torsion beam axle at the rear. It features a lighter anti-roll bar, shock absorbers and springs that are all part of its slimming diet.

And like most Citroens, the Cactus is a comfortable city car. The suspension does a decent job of ironing out road imperfections, although big bumps do tend to find their way into the cabin. Its wide lounge chair-like front seats are as comfortable as they look, while road and engine noise are kept dutifully at bay.

Its lithe body and car-like dynamics makes the C4 Cactus an agile and relatively fun car to punt around the corners. There’s still minor body roll and understeer if you go overboard but it is generally well composed. The low rolling resistance 205/50R17 Goodyear tyres also grip well in the dry. 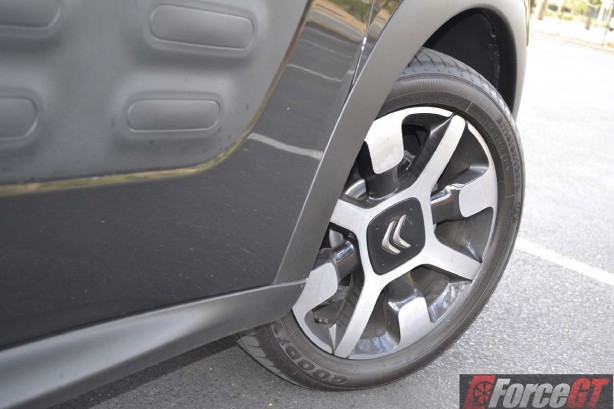 The brakes, which are smaller than those on the C4, do a good job in shedding speed quickly, too.

The Cactus’s electric steering, with three turns lock to lock and decent feedback, is light for city maneuvres but weighs up progressively with speed.

What impresses most though, is the car’s fuel economy. Over our weeklong test of mostly city commutes, the Cactus returned an average fuel consumption of 5.1L/100km – an amazing feat for a car that sits 5 adults comfortably.

The all-new Citroen C4 Cactus is a likeable car. It is uniquely designed with a spacious interior, good ride quality and decent dynamics.

The diesel has impressive fuel economy but is let down by the jerky semi-automatic.

The Cactus also comes with one of the best new car warranties on the market to put buyers’ mind at ease.