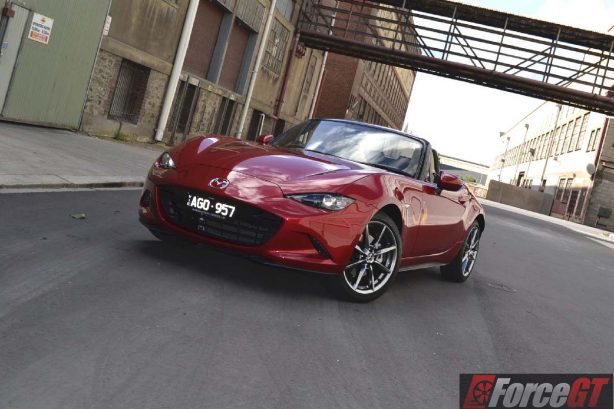 The Mazda MX-5 is the world’s most successful roadster, with global sales fast approaching the one million mark since its launch in 1989.

First hatched by a group of Mazda U.S. staffers that wanted an affordable, fun-to-drive lightweight sports car modeled on early European sports cars such as the original Lotus Elan and MG B, the 2016 ND MX-5 has just entered its fourth generation and is better than ever!

According to Mazda, development of the new MX-5 was a challenging one, as it not only marked the 25th anniversary of the model’s history, but also signaled the return to basics for the popular roadster.

In other words, Mazda has admitted that successive generations of the MX-5 has gotten bigger, heavier and a little bit less exciting to drive. 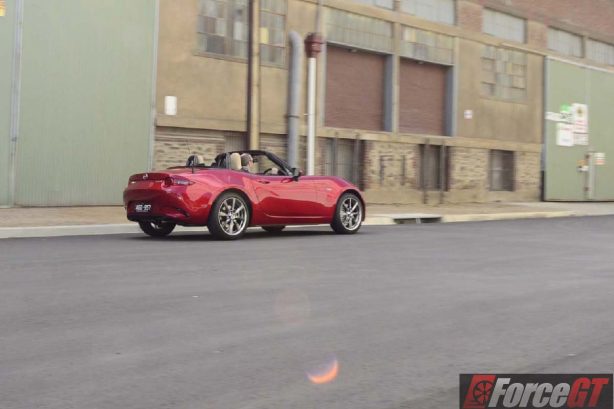 The 2016 model aims to reverse all of that and is thus shorter, lower, wider and – crucially – over 90kg lighter than the model it replaces. It is the most compact yet of all generations and promises to embody the fundamental pleasure of driving that is synonymous with the manufacturer’s jinba-ittai philosophy – in oneness between car and driver.

The 118kW/200Nm 2.0-litre engine is the same SkyActiv unit as found in the Mazda 3, CX-3 and CX-5 but massaged to produce slightly more power. When matched with a 6-speed manual, the 2.0-litre model weighs just 1,033kg, giving it the same power-to-weight ratio as the admittedly spartan Lotus Elise. 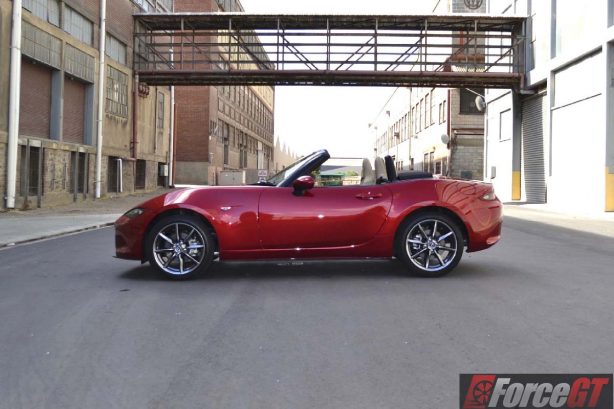 Throughout its development, Mazda’s strict ‘gram strategy’ sees each component rigorously scrutinised for weight. The all-new suspension, still consisting of front wishbones and rear multi-links, is 12kg lighter thanks to the use of aluminium parts.

Likewise, the engine frame, bonnet, boot lid, front wings and bumper reinforcements, underbody crossmember and soft-top links are all made of aluminium. The weight of the engine block has also been reduced by approximately 14kg for the 1.5-litre mill and 8kg for the 2.0-litre.

The new rear differential unit is now more compact and approximately 10kg lighter in the 1.5-litre and 7kg in the 2.0-litre, a result of the change in the gear rings for the direct drive sixth gear. It also features a ring gear optimised in size to support the amount of drive torque produced. 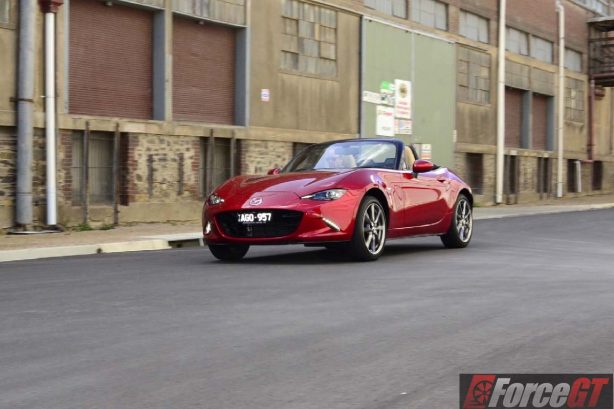 Importantly, the weight is ideally distributed 50/50 front-to-rear, with a centre of gravity that is slightly lower than before.

The result is one of the most agile, responsive and engaging sports cars money can buy.

You drop down low into the snug front seats and with just inches off the ground, the driving position is properly sporty. The clutch travel in our 6-speed manual is satisfyingly short and is matched with a stubby short-shifting and precise gear lever. 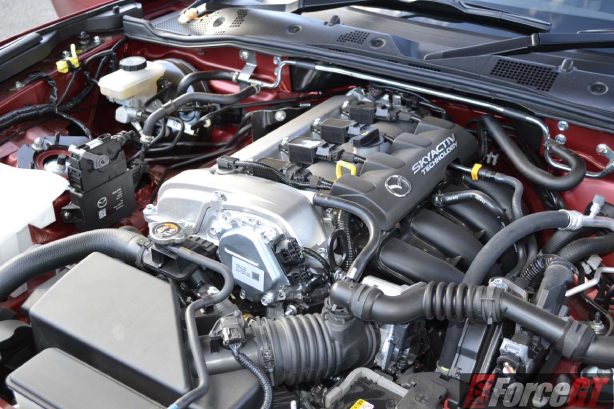 The 2.0-litre aspirated four-cylinder engine won’t set the tarmac on fire (tested 0-100km/h in 7.3 seconds), but comes with an unexpectedly rorty exhaust note and is well matched to the sprightly personality of the car. There is hardly any need to drop lower than 3rd gear in most corners, except on tight hairpins.

While the 205/45-section tyres may seem narrow in today’s standard, they have an almost supernatural level of grip through the bends. The rears will still breakaway into lateral slip on tighter turns – just – if you are hard on the accelerator pedal, but they do so in a delightfully predictable progression.

It is this wonderfully delicate balance in the MX-5’s chassis that makes the MX-5 such a joy to drive. You can make minute adjustments to its trajectory, with either the beautifully direct steering or the brilliantly sharp throttle and the car will respond with eager enthusiasm, like a terrier trying to please its master. 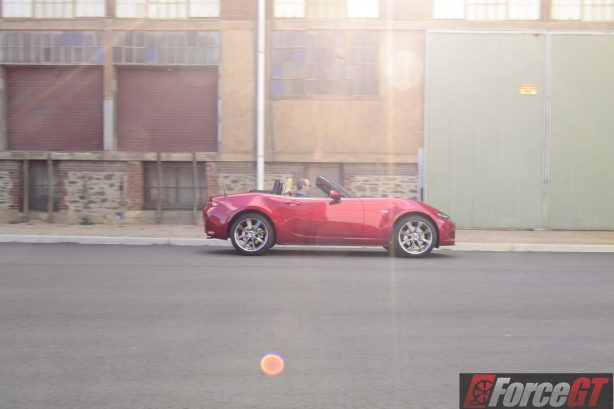 As our test was conducted on public roads, we did not disengage the car’s ESP, but were told you could have even more fun with it off. The system is well calibrated and tidies things up unobtrusively.

Nevertheless, the new MX-5 is not without its foibles. The electromechanical power steering feels slightly numb on centre, while the pedals’ placement isn’t ideal for heel-and-toe, as the accelerator pedal is too low compared to the brake pedal.

While the small wing mirrors may look good from a design point of view, they are in desperate need of wide-angle mirrors as you could hardly see anything with them. 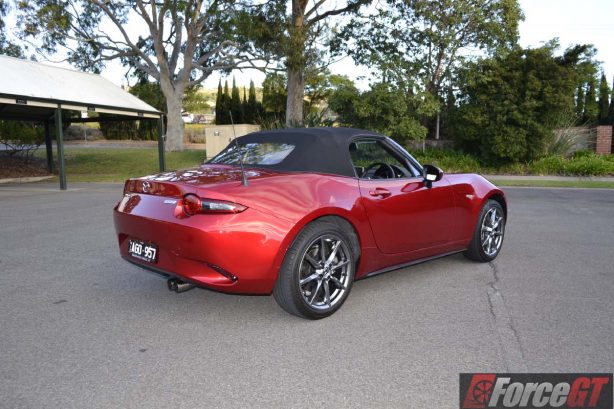 Speaking of aesthetic, the 2016 MX-5 is less rounded compared to its predecessor. There are familiar sports car cues such as the long bonnet, low hip point and dynamic stance that will resonate with enthusiasts.

The design has also been infused with Mazda’s latest KODO design language, with short front and rear overhangs, taut flowing lines that travel from the headlamps to the rear fender to create a sense of motion and the brand’s trapezoidal front grille.

At the back the flared rear fenders gives the car volume and a wide sporty stance, while the iconic U-shaped rear combination lamp design and its round tail lamps is a nod to the previous generations of the MX-5.

Like its weight distribution, the MX-5’s proportion is spot on, whether with roof up or down. The manually operated roof is relatively effortless to operate, opening with a pull of the lever mounted ahead of the rear view mirror. Once unlatched, it’s a matter of pushing it back and locking it into place behind the seats. 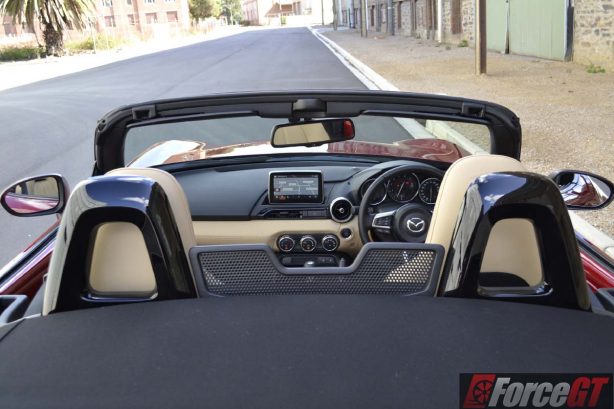 Inside, the new dashboard looks clean and contemporary, with an easy to use 7-inch touchscreen perched proudly in the middle. It is controlled by an easy to use rotary dial on the centre console, or the highly effective voice control system.

The satin chrome trimmed three-meter cluster features a large analogue tachometer in the centre, flanked by a speedometer on the right and an information display on the left. Disappointingly, there isn’t a digital speedometer. 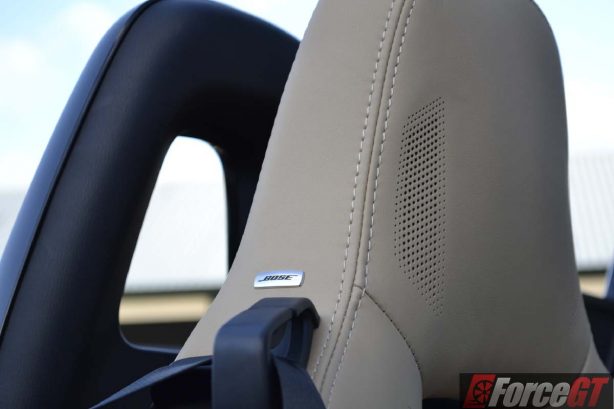 Our GT model is equipped with a punchy 203-watt Bose premium sound system with nine speakers, including two mounted inside the headrests and classy 17-inch alloy wheels.

Due to the MX-5’s reduced dimensions, luggage capacity has reduced from 150-litres in the previous model to 130-litres. However, the compartment itself is 35mm longer and 36mm deeper.

It doesn’t matter how fast you travel in the 2016 Mazda MX-5, it stirs your enthusiasm and arouse your excitement with its fun, agile handling and scalpel sharp dynamics.

With improved packaging and an even more affordable price tag, it isn’t hard to see why the MX-5 is the best selling roadster of all time.