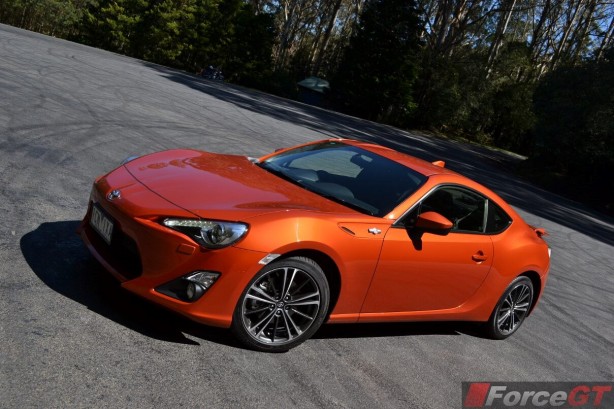 It’s seven in the morning and it’s not a weekday. There could only be two reasons why I wasn’t slumbering under the warmth of the blanket at this hour on a Saturday morning – having just found my way home from a messy Friday night out, or something fun is parked in the driveaway begging to be driven in anger. This morning it’s the latter.

With car keys in the pocket, camera and a notepad strapped safely in the passenger seat, I downed the leftover Redbull and sinked into the snug driver’s seat. With the silence of the Saturday morning broken by the twin-pipe burble of the 2.0-litre boxer four, the only thing left to do is to pick a piece of tarmac where all the fun can be had.

I knew the places I must avoid on the first day of the weekend. The coastal roads would be full of cyclists escaping the city to sort out their work/life balance, and the B-roads through the wineries would be plagued by family SUVs doing 20km/h below the speed limit.

So, that leaves us with the hills. It might as well. After all, it’s where the Toyota 86 calls home. 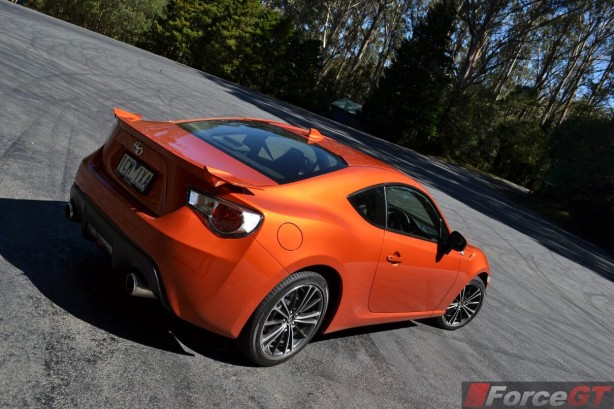 Pronounced Hachi-Roku in Japanese, the “eighty-six” leverages on the AE86 generation of lightweight rear drive coupes sold as the Toyota Sprinter Trueno and Toyota Corolla Levin from 1983 to 1987.

The 86 continues the front-engine rear-drive layout of its predecessors, but uses a horizontally-opposed atmospheric four-cylinder as its beating heart. The D4-S direct injection boxer engine is sourced from Subaru, who co-developed the 86 with Toyota. It serves up 147kW and 205Nm to the rear axle through a six-speed manual or automatic transmission. And this means it will go sideways, if you so desire.

As for the modest power, Toyota reasons that the 86 is not about serious speed or blistering acceleration, but delivering sheer driving fun.

To test this theory, I pointed the 86 towards one of the best driving roads in Victoria – the Reefton Spur – about 100km north east of Melbourne. With over 170 corners in 35km, the Reefton is a petrol head’s heaven. 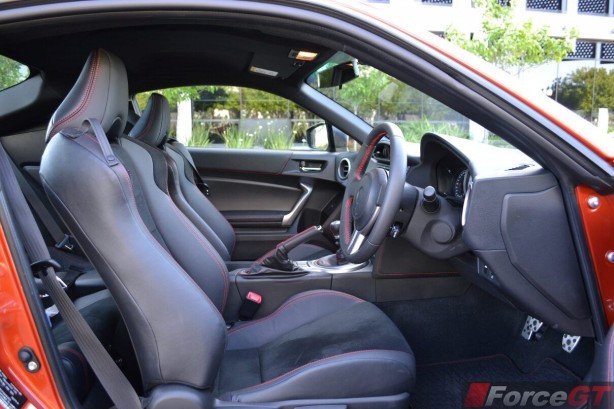 True to its spirit as a pure driver’s car, the 86 has nailed one thing that is so crucial in any sports car – driving position. It is absolutely spot on – tight and low with steering wheel at chest level. And those sport seats are top notch, providing excellent support while ensconcing you in great comfort, not to mention looking darn good too. Unlike most cars these days, there are also no buttons on the steering wheel to distract you from the thrill of driving.

Despite its hard-to-believe price tag of just $32,790 for the GTS (or a bargain $29,990 for the GT base model), the 86’s cabin – though plasticky at some places – is not exactly budget grade. There is leather on the door trim, steering wheel, centre console kneepads, gear knob and seats. The headliner is black, and satellite navigation and reversing camera are standard.

A few clicks down from the township of Reefton, the road swings to the left. With the first uphill corner pre-warned by a winding road sign now filling the 86’s heavily raked windscreen, it’s time to drop a few gears and see what the 86 has got to offer.

Keeping the flat-four spinning over 4000 rpm, the car’s character changes dramatically. The engine sounds enthusiastic, accompanied by a deep exhaust note. The boffins at Toyota have actually piped some of the orchestra under the bonnet into the cabin to heighten the aural sensation (and no, it doesn’t use a digital synthesiser).

The mill is never tired of sweeping the rev counter to its 7500 rpm cut off. It pulls strongly too, once it’s on boil. Working the cogs through the slick and precise six-speeder, matched with easily executable throttle blip on each downshift, driving has never been so pure and enjoyable. 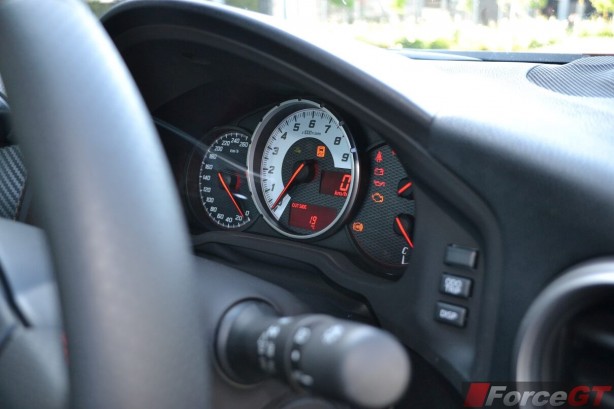 A proper driver’s car? Oh yes. Despite its rather mundane zero to 100km/h sprint time of 7.6 seconds, the 86 is an absolute joy to drive. Because the car’s potential is so easily accessible (it even has the same tyres as a Toyota Prius!) it feels faster than it actually is.

Point the steering into a corner and the 86 obeys with no hesitation. With an ultra-low centre of gravity of 460mm and tipping the scale at just 1,275kg, the coupe corners with the poise and precision of sports cars costing three times more.

Dial in a bit more throttle and the rear end will come loose, before the traction control steps in to quell the looming lunacy. Kill off the electronics fully and the 86 will happily turn expensive tyres into billowing cloud of smoke. All day long. But afraid not, because it’s all so predictable and controllable, kicking its tail out is more fun than scary.

Such was the top shelf handling, I almost forgot the Toyota 86 only costs $29k. It’s no wonder sales of this cult sports coupe have passed 11,000 in Australia – the highest total for any country outside Japan and the US. 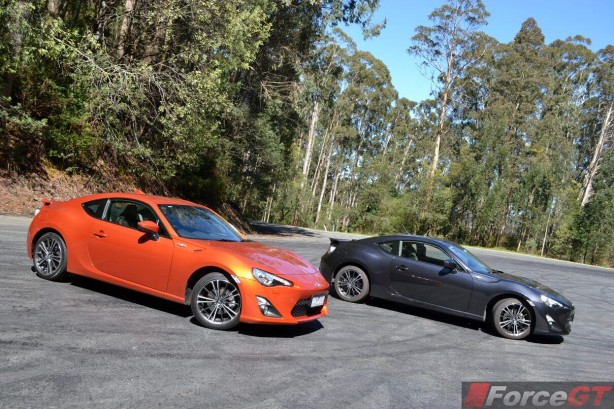 For 2014, Toyota has tweaked the 86’s suspension to reduce body roll and improve handling by specifying new suspension mounts, retuning the damping and adopting lower-friction oil, oil seals and guide bushings. The result is a slightly more responsive and communicative chassis compared to the pre-update model.

The interior of the base GT variant is now fitted with the same instrument cluster as the higher-grade GTS. It includes a digital speed read-out and a rev indicator light to warn of the approaching red line.

The GT automatic also gains a shift-position indicator, while the GTS introduces a sportier carbon-look motif for the instrument panel surround.

A shark-fin antenna is now visible on the roof of both grades for aerodynamic as well as aesthetic reasons. There are also two new shades of white and silver added to the exterior paint palette. 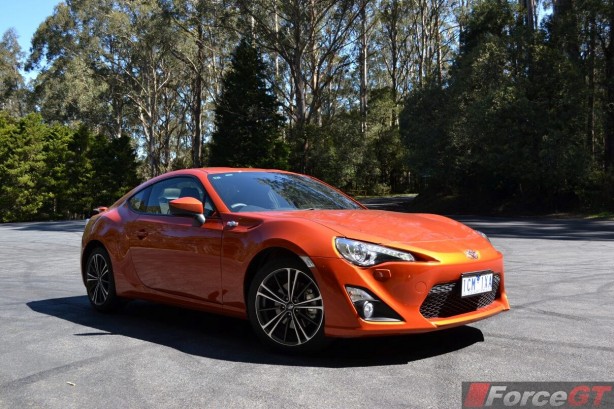 As the road soars, dives, sweep and switches back through the Yarra Ranges, the 86 reveals more and more of its athleticism through its primitive setup – front-engine, gearbox in the middle and rear-wheel driven. And I just can’t have enough of it on roads like these.

The feedback through both the steering and the excellent sports seats was reassuring. The brakes held up well and had plenty of bite to nail the turn-in points.

So, with the twisty workout over, it was time to head back to town to see what the 86 is like as a car and not a toy. The ride is firm but retains an appropriate layer of suppleness over most surfaces, and even on dimply roads the suspension does its best to round off the rough edges rather than crash over them.

At three digit speeds, the 86’s cabin noise levels are slightly higher than average, partly and forgivably due to the lack of sound proofing, all in the name of weight-saving. However, the 86 is still one of the more relaxing sports cars to drive. With a pair of rear seats (though only good for small kids) and a decent boot, the 86 can even run some shopping errant.

“Many of the rivals have turbos, big tyres and four-wheel drive,” says Yoshi Sasaki, Toyota product planning chief. “They have become sports cars that control their own behaviour – sports cars that don’t let the driver do enough.”