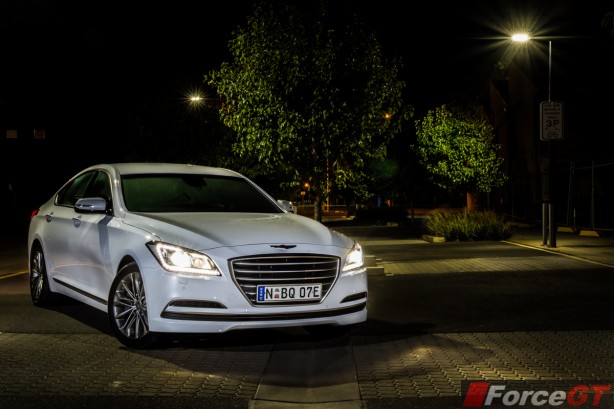 The Hyundai Genesis Sedan is the Korean brand’s most ambitious vehicle. Launched in Australia late last year, it is Hyundai’s first ever rear-drive, premium vehicle to grace the company’s local showrooms.

While not strictly “all-new”, with the first-generation BH Genesis making its world debut in 2008, the second-generation DH is the first Genesis to be built in both left and right hand drive for global consumption.

It sits at the pinnacle of Hyundai’s increasingly vast and promising range, and is easily the most advanced and luxurious car to ever wear the oval “H” badge. In fact, Hyundai Australia is so confident of the vehicle that it decided to slap the only Hyundai badge on the entire vehicle proudly on the Genesis’ bootlid, where not even the domestic models do. 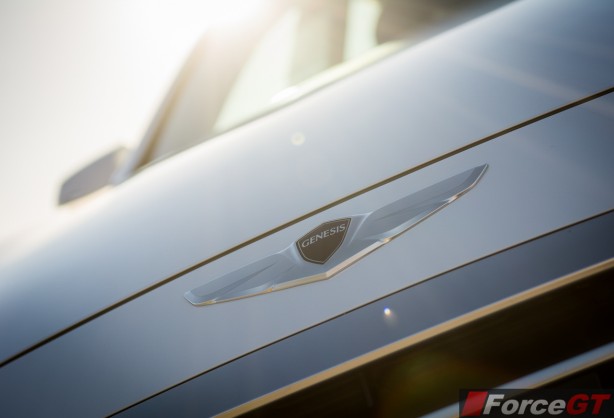 With prices starting from $60,000, it promises to bring premium design, quality and luxury within reach of more Australians. It may look expensive for a Hyundai but you get some of the most advanced technologies in the automotive world and benchmark safety features.

Importantly, the handsome Genesis has been tuned by Hyundai Australia’s engineers to ensure it suits local driving tastes and conditions – an extraordinary outlay given the potential return (an ambitious figure of around 1,000 a month has been banished around).

We recently spent time with the Genesis to find out if Hyundai’s first prestige car is worth the price of admission and rub shoulders with the segment royalty that is the German triumvirate. 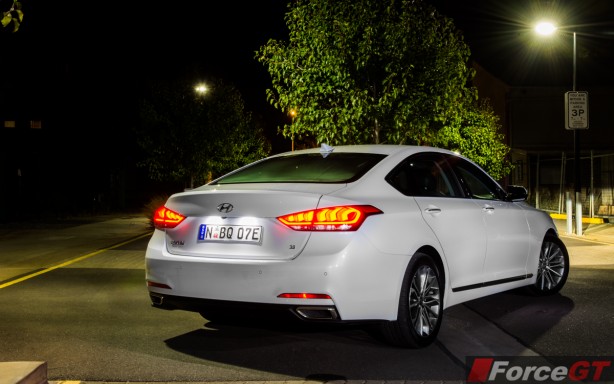 The Genesis’ Australian connection is not only limited to its ride and handling, the car’s balanced stance and near perfect proportions are penned by Korean-born but Australian-educated Creative Design Manager, Casey Hyun.

With all the hallmark of a modern, prestigious and sporty luxury rear-drive sedan, from a short front overhang and long bonnet, to the long dash-to-axle ratio; the Genesis’ styling has great presence and looks suitably classy and understated.

At the back, under the aerodynamically tuned bootlid, the jewelled-like LED taillights are especially striking at night. The dramatic effects are further heightened by the illuminated doors handles and side mirrors that automatically extend on approach, which then project the word ‘Genesis’ on either side of the car. It never fails to capture the attention of passers by. 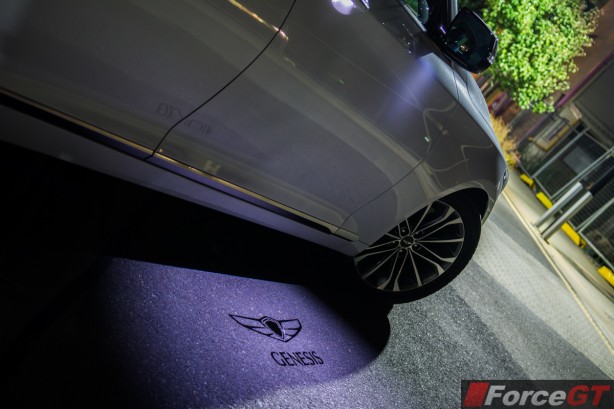 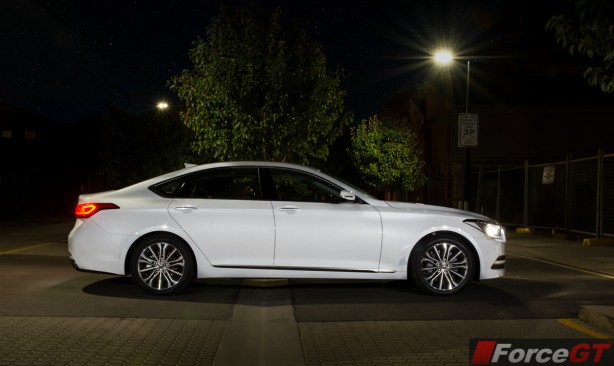 In silhouette, the Genesis’ taut surfaces with a sweeping character line that incorporates the door handles, is reminiscent of most contemporary BMWs, but the overall effect is thoroughly Hyundai.

Lift the softly damped door handles and you are greeted by a truly sumptuous interior. If you move your nose closer to the screen, you can almost smell the freshly upholstered, double-stitched, perforated leather seats.

Attention to detail on the lavishly equipped “entry-level” test car is compelling, too. The dashtop is softly padded and covered with cowhide; the door bins, glove compartment and storage area under the front centre armrest are lined with velvet-like materials, while all plastic surfaces are soft to the touch.

There’s one-touch up and down power windows all round that slow down as they reach the top to avoid the unpleasant “thump”, an analogue clock that synchronises with the satellite and an automatic rear sunblind that thoughtfully retracts when reverse gear is engaged.

While we can’t fault the impressive 9.2-inch high-definition LCD touchscreen, or the tactile switchgear, the dashboard is too conservatively styled and appears dated compared to the ultra-modernist Lexus IS/GS, and svelte BMW 5 Series. The four-spoke steering and wood paneling also seemed to have come from an era when Madonna ruled the charts. 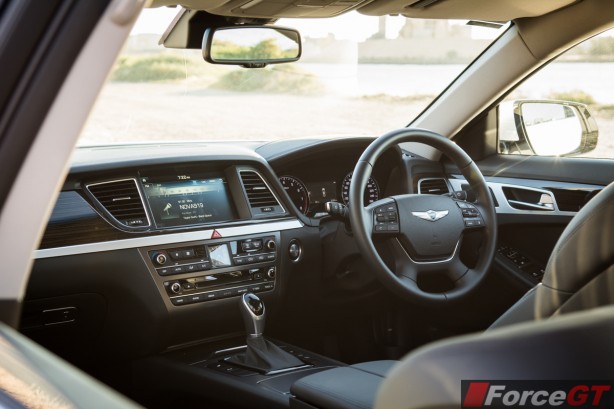 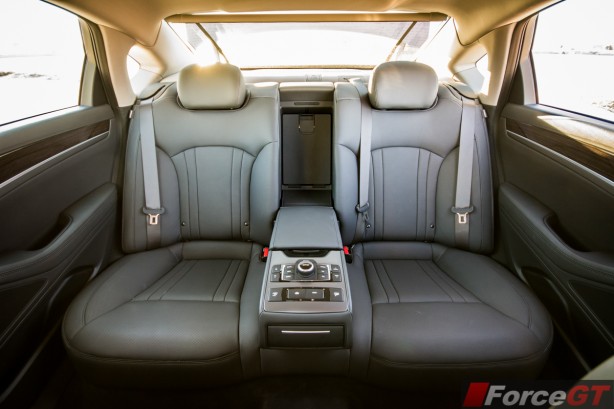 The Genesis’ interior is as vast as the numbers suggest, with big comfortable seats that makes long distance trips a pleasure. Its driving position is almost perfect, too, with front seats that offer 12-way adjustment for the driver. The rear centre armrest folds down to reveal controls for the infotainment unit, rear electric sunblind, as well as buttons that move the front passenger seat fore and aft if you have a chauffer.

The only glaring omissions, if we are picky, are the lack of separate climate control for the rear seats, along with rear seats that don’t fold, with only a ski port for awkwardly sized items. 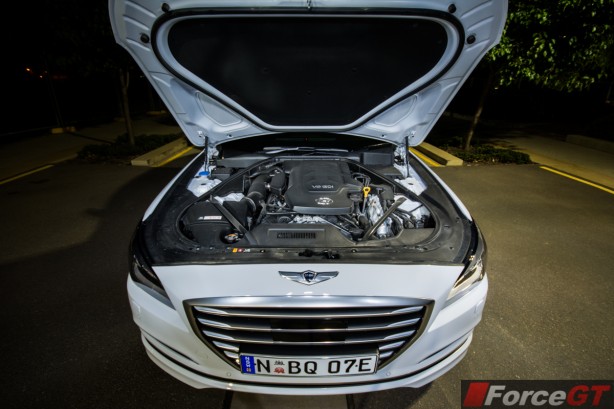 Hyundai’s Lambda II 3.8-litre direct-injected petrol V6 is the only engine available under the Genesis’ lengthy bonnet in Australia. The naturally aspirated, dual-continuously variable valve timing unit develops 232kW at 6,000rpm and 397Nm of torque at 5,000rpm, sent to the rear wheels via an in-house developed 8-speed automatic with paddle shifters.

As befitting its prestige nature, the Genesis’ powerplant is whisper quiet and luxuriously refined. It purrs away silently around town and response with a meaty grunt when you plant your foot on the accelerator .

Power delivery is buttery smooth and satisfyingly progressive, with a chubby mid-range torque (90 per cent of the peak torque is available between 2,000-6,000rpm) that makes overtaking a breeze in the large sedan.

It will hit 100km/h from a standstill in a hot hatch beating 6.7 seconds (tested), too.

Naturally, against its turbocharged European rivals, the Genesis’ big capacity V6 pays the penalty at the pump, with the trip computer posting 12.6L/100km of combined average after our weeklong test. 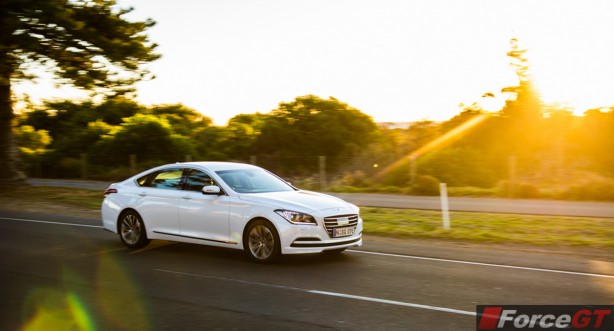 Benchmarked against the BMW 5 Series, Mercedes-Benz E-Class, and even the Holden Commodore Calais, the Genesis’ multi-link suspension set-up has undergone extensive local tuning.

Although no aftermarket parts are used in the revised setup, revisions were made to the front and rear shocks, the rear anti-sway bar and rear springs, as well as to the rear sub-frame. 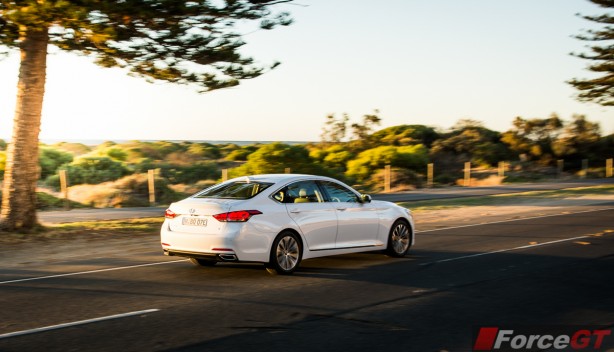 The result is a relaxed ride and balanced handling.

The car flows smoothly and quietly (even without the optional acoustic glass) across our pimply urban tarmac, dutifully ironing out any harsh bumps that pop up along the way; even speed bumps can be taken at reasonable speeds without any secondary body movement.

While Hyundai isn’t pitching the Genesis as a sports sedan, the car’s well judged suspension ensures understeer is well contained and body roll is minimal. Its steering is well weighted and relatively direct, with good on-centre feel.

Disappointingly, there has been no change to the car’s ESC calibration where it keeps a rather tight leash on proceedings, even in Sport mode. On over-enthusiastic cornering, the system can be a little heavy handed in cutting power and braking individual wheel. It is however, a little less intrusive than some of the Lexus systems we have come across. 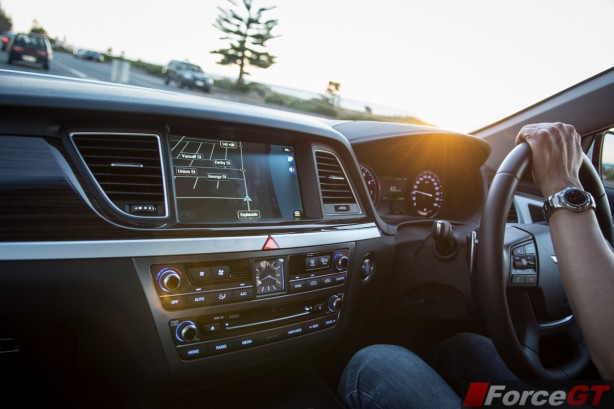 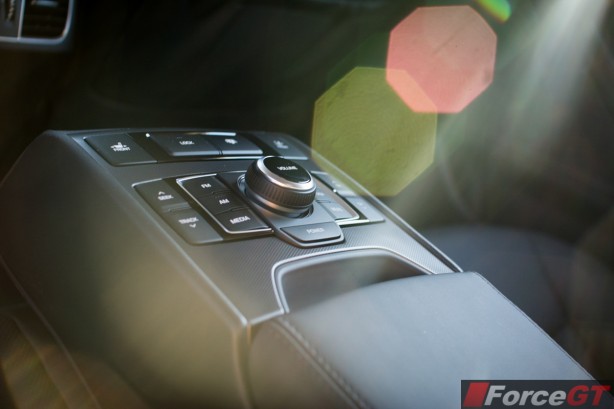 Despite its prestige positioning, the Genesis has lost none of Hyundai’s value for money attributes. Our entry-level model is equipped with advanced features that are pricey options in most of its competitors.

With the cloud of the end of local manufacturing looming, the Hyundai Genesis might have arrived at an opportune time to fill the inevitable void left by the local heroes – an affordable rear-drive sedan.

The Genesis is a convincing package – immaculately put together, drives like a luxury car should and backed by Hyundai’s five-year warranty and complimentary service.

While it won’t worry the Germans for now, its value proposition is simply spectacular.

No other luxury marque offers so much for so little. If you can look beyond the badge, which Hyundai admits is a big ask, there is no reason why the Genesis shouldn’t be on your shopping list.