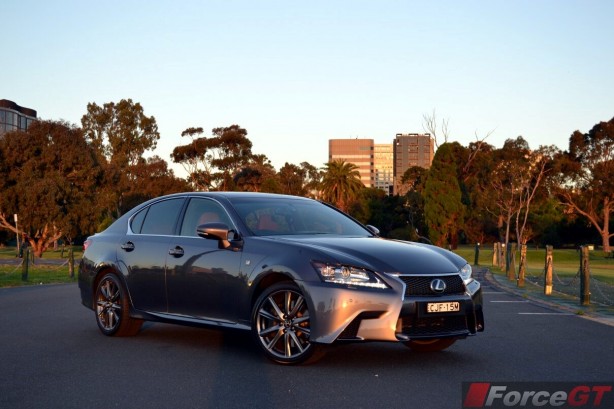 When Lexus brought out the LFA supercar in 2011 we knew the marque was onto something. The once librarian of the car world had decided to ditch its thick reading glasses for some party hats. Lexus wanted to be fun. And the new GS mid-size saloon is the first mainstream Lexus model to get this new dose of DNA.

The GS is no newcomer to the scene, having been chasing the BMW 5-Series for over two decades. While the standard GS is already giving the Germans in the segment a hard time, it’s the F Sport that Lexus hopes will propel the GS to the top of the cream.

Since taking over the helm at Toyota, CEO Akio Toyoda, a petrol head himself, has been instrumental in injecting Lexus with fresh ideas and an increasingly exciting lineup that has long eluded the brand, including the F line, Lexus’s answer to BMW’s M, Audi’s RS, and Mercedes’ AMG.

The third generation GS gets two V6 engines – a 2.5-litre in the GS 250 and a 3.5-litre in the GS 350, with the V8 from the previous generation dropped completely to make way for the GS 450h hybrid in the form of a 3.5-litre Atkinson Cycle V6 paired with an electric motor. The range has also recently seen the addition of the new GS 300h, powered by a 2.5-litre four-cylinder hybrid powertrain.

Unlike previous generations, the new GS wants to be noticed. It looks good too. In F Sport guise, the elegant base shape is tricked up to portray its sporting potential. It’s unquestionably aggressive and sporty from just about every angle. 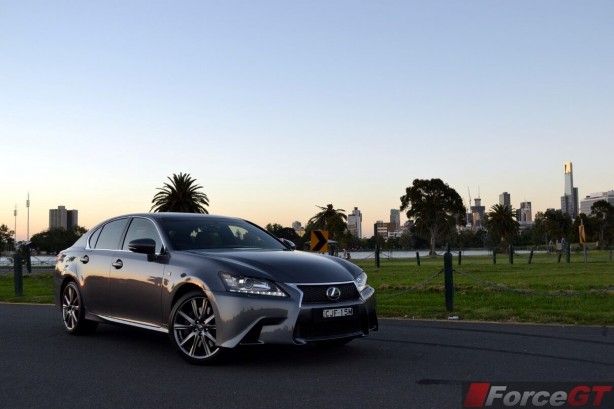 Up front a bold F Sport bumper is punctured by two deep intake vents on each side that serve to cool the uprated rotors in the F-Sport. The nose is dominated by the rather polarizing spindle grille – Lexus’s latest ‘like it or hate it’ corporate identity that gets people talking (or debating).

At the rear, things are a lot more subtle. A rear bootlid spoiler and diffuser add a touch of sportiness as well as keep the rear wind turbulence in check.

With the otherworldly glow from the pair of distinctive L-shape LED daytime running lights and the badassed looking gun metal 19-inch alloy wheels, the new GS F Sport exudes presence that never ceases to get attention everywhere you go. 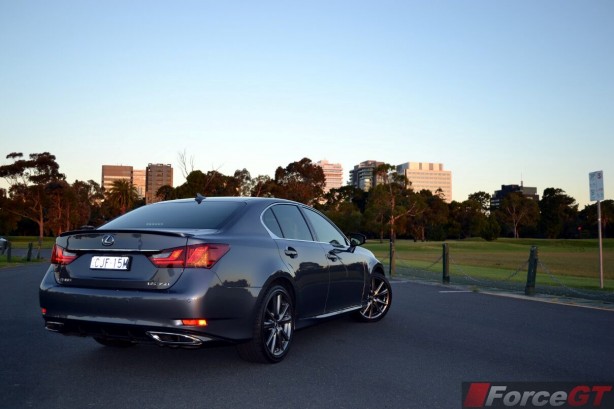 Inside, the GS interior has more leather and soft touch materials than a small auditorium. The dashboard is beautifully executed and the massive 12.3-inch widescreen display for operation of the infotainment and satellite navigation in the centre console is a killer.

The heated and ventilated seats are one of the best we have ever encountered. Front and rear legroom is generous for five adults although rear headroom is limited for the middle passenger due to the sloping roofline.

The 520-litres of boot space is also dwarfed by the larger capacities of its German rivals.

The GS 350’s direct and multi-point injection 3.5-litre V6 with dual continuously variable valve timing with intelligence (VVT-i) produces 233kW at 6,400rpm, accompanied by 378Nm of torque which is accessible from just 1,500rpm and peaks out at 4,800rpm. Power is sent to the rear wheels via a six-speed automatic transmission, in the case of our test car. A new eight-speed auto replaces the aging six-speeder from late 2013 onwards. 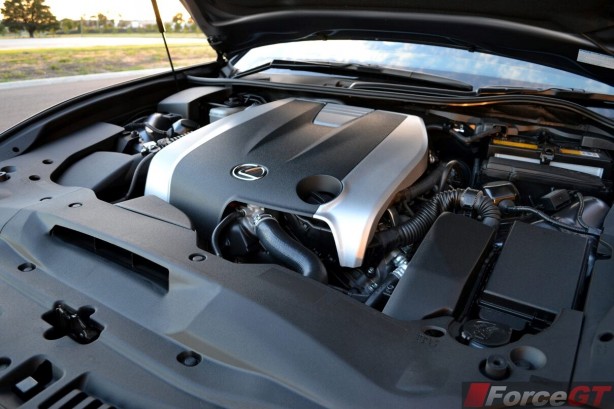 The superbly refined V6’s power delivery is linear and responsive across the whole rev range. Typical of a Lexus, the engine is so quiet it’s almost inaudible under normal cruising but wind it up by planting your right foot and a snarling growl rushes in from under the bonnet, thanks to the Acoustic Control Induction System which varies the length of the induction manifold.

Despite the lack of launch control, the 1,740kg saloon will still crack the 100km/h mark in 6 seconds (6.3 seconds tested), no sports car pace but fast enough to quicken the pulse. 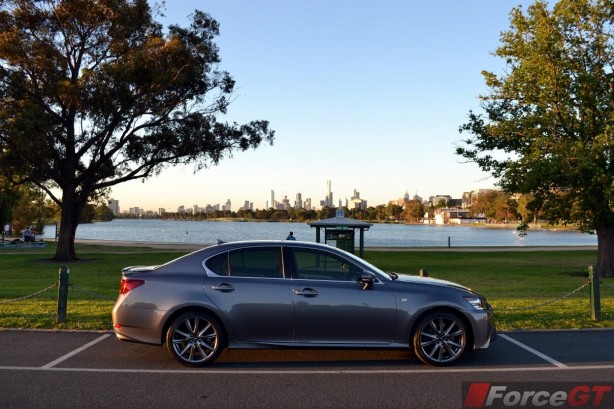 On twisty back roads, the GS’ handling is surprisingly sharp for a large sedan. Sport Plus mode is capable of hiding the weight of the car remarkably well by fully exploiting the excellent chassis, helped further by the superb grip from the sticky Bridgestone tyres. In all but the tightest corners, the GS will relentlessly trace an intended line with amazing composure and minimal body roll.

Living up to its sports sedan credentials, the Variable Gear Ratio Steering (VGRS) is ultra responsive and provides good feedback with just the right amount of weightage. We also noticed the added agility and the amazingly small turning circle given by the Dynamic Rear Steering (DRS) feature which turns the rear wheels up to 4 degrees in the direction of the front wheels at high speed and in the opposite direction at low speed. The performance brakes in the F Sport are strong too with good feel through the pedal.

Around town, the GS gives a smooth ride but heavily dimpled roads can still unsettle the sports tuned suspension and send ripples through the cabin. 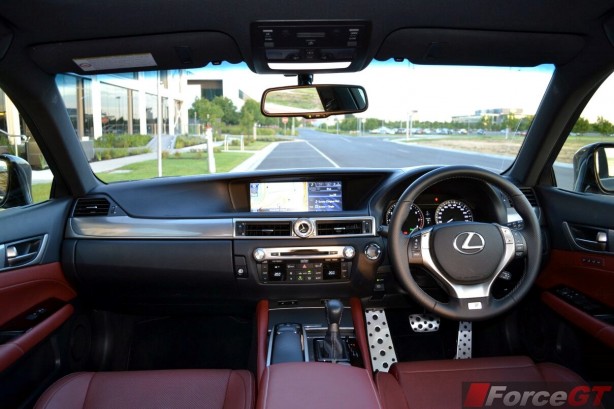 The GS feels impeccably built inside out. Doors are well aligned and shut with a reassuring thud. The interior is superbly finished with excellent fitment and high quality materials on most surfaces.

However, the digital displays for the dual zone climate control in the lower centre console look a little cheap for a car at this price range and the plastic piece in the centre of the steering wheel feels a bit Corolla grade.

Our week spent with the GS 350 F Sport returned an average of 12.0L/100km with equal split of urban, freeway and spirited driving. Cruising on the freeway the figure hovers around 7.0L/100km.

While we enjoy the immediate and linear power delivery of the naturally aspirated engine in the GS, it is inherently less efficient compared to boosted powerplants offered by many other competitors. 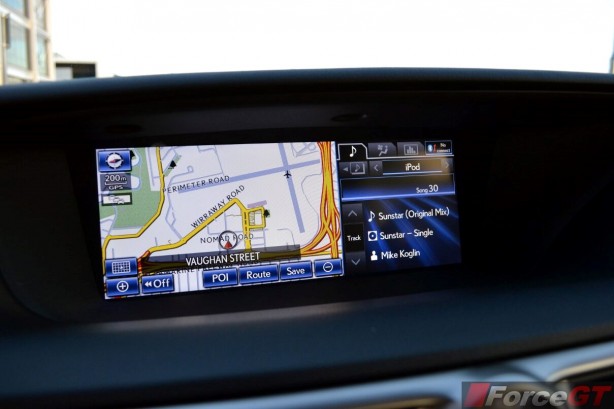 There is also the incredible 835-watt, 10-channel class-D amp and 12 speakers Mark Levinson premium sound system with titanium-dome tweeters and subwoofer with aramid-composite cones. I do believe I literally took a year off the life of my ears blasting my favourite tunes on it!

The ultra crisp 12.3-inch widescreen LCD is one of the best in class. Control is through a joystick-style remote touch interface, which I find is too sensitive when navigating the cursor to a menu item.

A week with the Lexus GS 350 F Sport has left me very impressed. It’s a fine sports sedan that is comfortable and luxurious in daily commute while remaining amazingly capable around the bends. But its likeable V6 engine is overdue for more efficient units.

As the new face of Lexus, the new GS continues to inherit Lexus’ proven quality and reliability. And the package is now even more complete with driving dynamics that are nothing short of brilliant.