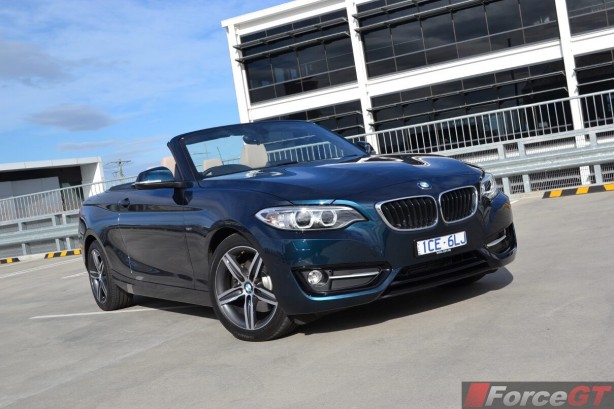 The BMW 2 Series Convertible is the entry point to propeller-badged open top motoring. Replacing the 1 Series Convertible, the new drop-top sets out to continue the success of its predecessor, which had no real rivals during its time.

The first generation established itself as the undisputed leader in its segment and was particularly popular here in Australia, which accounted for nearly four per cent of global sales, sitting as its fourth largest market behind the United States of America, Germany, and the United Kingdom.

For 2015 however, the 2 Series Convertible shares the segment with the new Audi A3 Cabriolet, an increasingly attractive proposition that no longer looks like an A3 hatch without a roof.

The new 2 Series Convertible is available in three petrol variants, neatly mirroring the Coupe range, with the entry-level 220i Convertible priced from $54,900 plus on-roads.

The higher output two-litre, 228i Convertible is available from $68,900, while the flagship M235i Convertible, the first ever drop-top member of the M Performance line-up, has a sticker of $85,800.

All versions fetch a significant premium over their coupe counterparts – the top-spec M235i Convertible costs a whopping $5,870 more than the M235i Coupe.

That’s because you’re paying for a big injection of style, all begins at the press of a button, as the fabric roof folds neatly into the boot in just 20 seconds, at speeds of up to 50km/h. 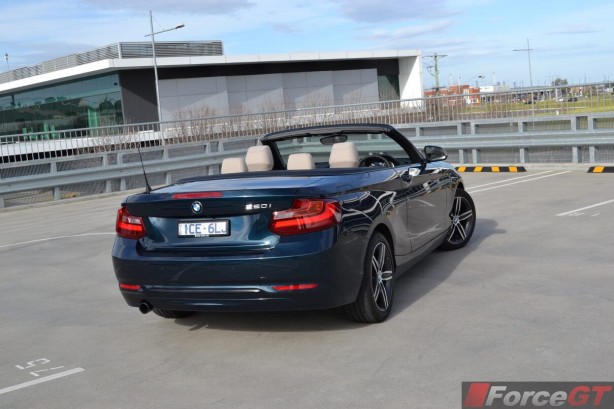 The newly-developed, electrically powered soft-top receives additional insulation for improved acoustic comfort. Compared to its predecessor, the 2 Series Convertible’s cabin is noticeably quieter at three digit speeds, but still can’t match the coupe’s serenity and refinement. The roof is offered in Black as standard, with optional colours Anthracite with silver effect and Brown with silver effect.

When the roof is open, the climate control switches to convertible mode, which also takes into account the speed at which the car is travelling during its adjustments to onboard temperature and ventilation.

Still, going topless in Melbourne’s chilly winter (when this evaluation was conducted) requires more heating than just hot air coming from the vents to keep warm.

Optionally fitted to our 220i Convertible test car, the $577 front seat heating is pricey (typical of BMW’s option list) but well worth it (a must in fact) if you want to enjoy open-top driving outside of summer. 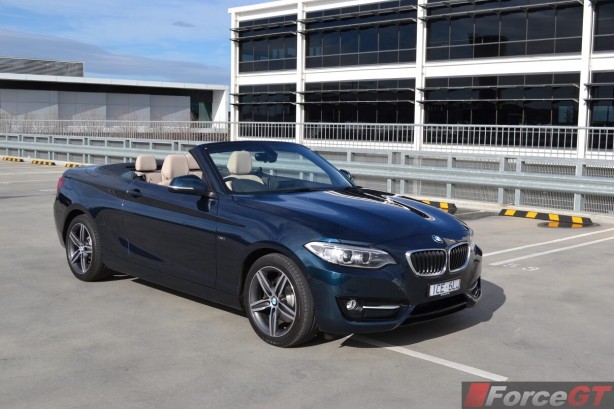 Roof down and up, the 2 Series drop-top is a handsome car. Like the 2 Series Coupe, the convertible sports a much sleeker design compared to its forebear. It’s now 72mm longer and 26mm wider, giving it a lower, more hunkered down look.

And in Midnight Blue metallic paint (a $1142 option) as specified in our 220i test car, it looks undeniably smart and classy.

Inside, the 2 Series Convertible will be familiar to most BMW owners – simple, contemporary and driver-oriented. The dashboard is carried over from the Coupe and 1 Series hatchback, which is not a bad thing as the layered, stretched design makes the cabin feels bigger than it actually is. 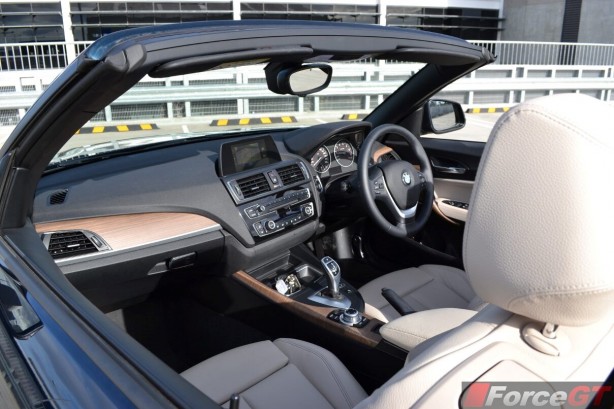 Like the rest of the BMW range, all controls and switchgear are ergonomically positioned and easy to use. The instruments are clear and the low-slung driving position is spot on.

General fit and finish is faultless, with many panels made from the same high-grade materials used in the 4 Series.

Immediately obvious once you sink into the driver seat is how snug the sport buckets are. Heavily bolstered around the sides, the front seats provide great support against lateral forces but are just as comfortable for long trips.

While there’ll be certainly no complaints of available legroom up the front, adults seated (or squeezed) in the rear bench will want the journey to be as short as possible. Realistically, those rear pews are for children only. That being said, the new car is slightly roomier at the back compared to the 1 Series Convertible.

With the roof up, rear visibility through the small rear glass window is still at a premium, though we have seen worse.

Not that it will matter much to owners of cars of this type, the 335-litre boot isn’t much more than a small hatchback. Fold the roof and you end up with only 280 litres of boot space. That sunny weekend getaway might have to become a day tripper instead. 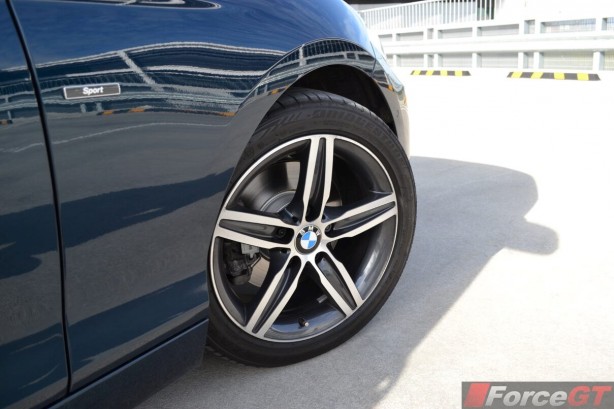 The rear-wheel-drive 2 Series convertible carries over the same engine line-up as its coupe sibling, except there’s no diesel offering (for now at least).

The entry-level 220i Convertible is powered by a 2.0-litre four-cylinder turbocharged petrol engine developing 135kW of power and 270Nm of torque from 1,250rpm. A higher output of the same 2.0-litre turbo four is found in the 228i Convertible with 180kW and 350Nm.

The flagship M235i Convertible is equipped with a turbocharged 3.0-litre straight six that churns out 240kW of power and 450Nm of torque.

The 2.0-litre four-pot in the 220i delivers respectable performance for everyday driving, although its 135kW output may not sound like a lot. Power delivery is smooth from the get-go as a result of all 270Nm arriving from an impressively low 1,250rpm. The torque peaks all the way to 4,500rpm, making overtaking as swift as its claimed 7.6-second sprint from zero to 100km/h.

The chubby mid-range means the 220i is effortlessly relax and easy in all but the most enthusiastic driving. 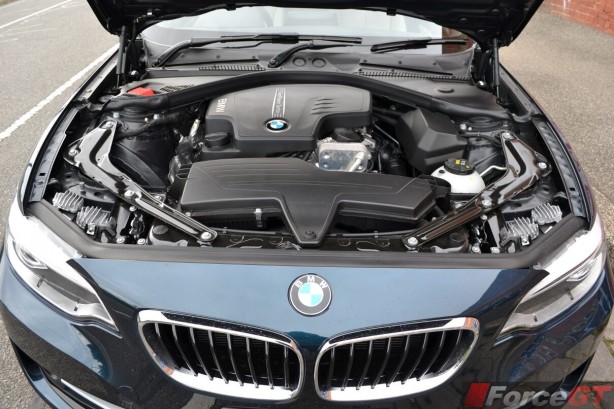 For a sportier driving experience, the 228i or M235i are the way to go. Completing the century sprint in just 6.0 seconds (claimed) the mid-spec 228i strikes the best balance between performance and price in the range.

Immediately evident is the stronger pull in all gears, but better still is the engine and exhaust note, which is appropriately sportier compared to that of the 220i.

Should you wish to mess up your hair even more, the seriously hot M235i is more than up to the task. It rips the first 100km/h in 5.0 seconds flat, thanks to its prodigious torque.

All models come standard with the 8-speed automatic transmission (6-speed manual is a no cost option) which includes gear shift paddles and launch control function. Fuel-saving technology (or EfficientDynamics in BMW speak) which includes auto stop/start and regenerative braking is also employed across the range.

The smooth-shifting auto works the power from the engine through eight perfectly stepped ratios. In Normal mode the unit’s smooth demeanour offers a relaxing drive. Flip it to Sport and you will appreciate the enthusiastically crisp gear changes. 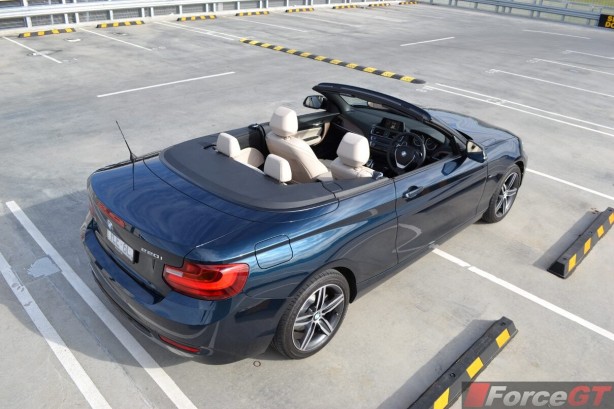 According to BMW the torsional rigidity of the new convertible has been increased by around 20 percent compared with its forebear. We won’t doubt that, as the drop-top exhibits neutral handling and has a fine balance, but it’s still not quite as sharp and composed as its coupe cousin.

While the steering in the coupe is ever so responsive to your inputs, the one in the convertible feels just that little bit duller.

Despite this, there’s still plenty of grip on offer, giving you the confidence around the bends.

The 228i Convertible and M235i Convertible each further benefit from Bi-Xenon headlights, Variable Sport Steering, leather upholstery, BMW Individual Shadow Line (both models) or Chrome Line Exterior (228i only) and heated seats.

The BMW 2 Series Convertible is better in every way compared to its predecessor, especially in the styling department.

Although not as dynamically sharp as the coupe, the convertible is still a brilliant drive and remains the performance benchmark of the segment.