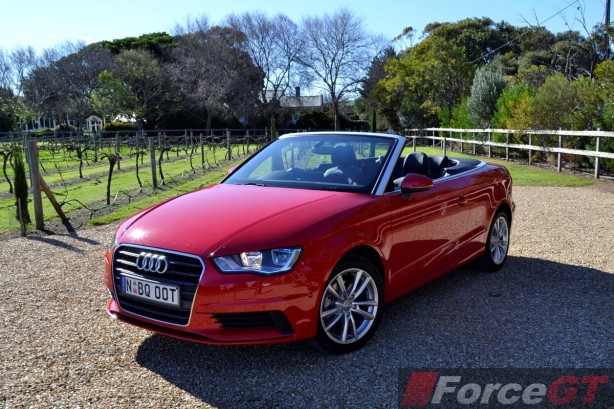 What better time to go topless than spring. The sun stays up and plays longer. The air is warm and infused with scents of blooms bursting from the meadows and gardens.

At our disposal is the latest addition to the growing A3 range – the 2014 A3 Cabriolet. Available in two trim levels and a choice of two petrol and one diesel engine, the ticket to Audi’s most affordable al fresco motoring starts from $47,300 for the 1.4 TFSI Attraction, before working its way up to $54,900 for the 1.8 TFSI Ambition Quattro – the latter being the only all-paw in the lineup.

Like the hatch and sedan variants, the Cabriolet sits on Volkswagen Group’s impressive and versatile MQB platform – the first drop top to do so. With a coupe-like profile, the new A3 Cabriolet is also the looker of the range – now based on the elegant lines of the sedan instead of the hatch.

So, to find out how it drives, we flipped the canvass top (which takes around 18-seconds to fold away seamlessly into the boot) off our Brilliant Red 1.4 TFSI Attraction, and headed up one of our favourite pieces of driving roads towards Port Elliot from Adelaide. 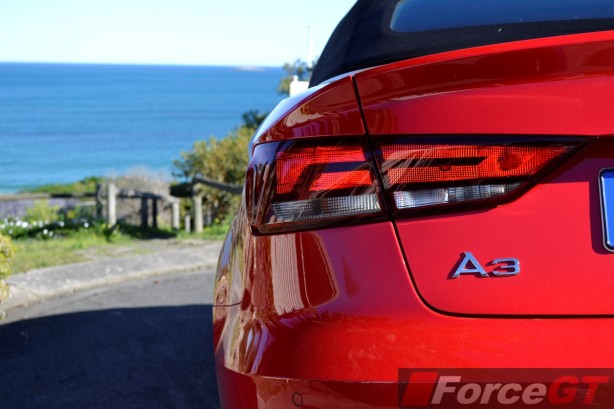 The journey will take us up the South Eastern Freeway before exiting at Mount Barker. We then traverse through the idyllic Long Valley Road towards Strathalbyn, famous for its rows of antique shops and, more recently, thriving arts community.

From there, we meander through the Alexandrina Road with its fast sweeping bends that cuts through some of the most picturesque sceneries in South Australia, en route to Currency Creek.

The final league is long stretches of 100km/h country straights that will take us to Port Elliot, in time for lunch at the delightful No.58 Cellar Door and Gallery.

On the freeway, it is immediately apparent that Audi’s petite 1.4-litre turbocharged four-cylinder petrol is the pick of the bunch, generating 103kW at 5,000rpm and a healthy 250Nm at 1,500-3,500rpm. Married to a 7-speed S tronic dual-clutch transmission, it delivers impressive pace, despite suffering from mild turbo off the line. 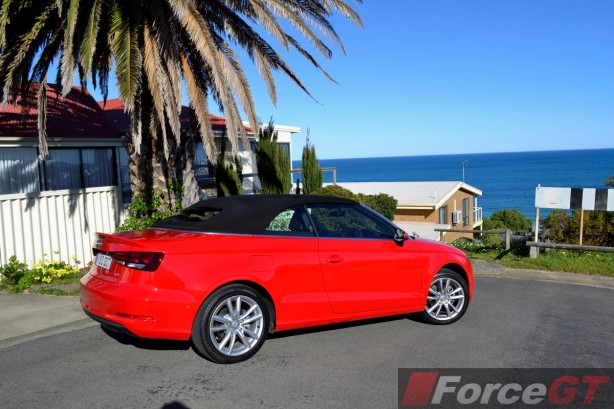 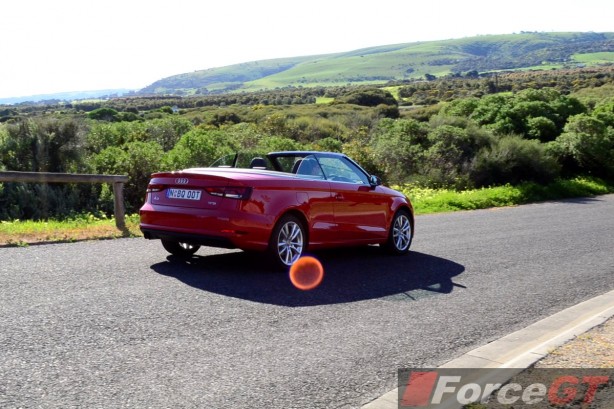 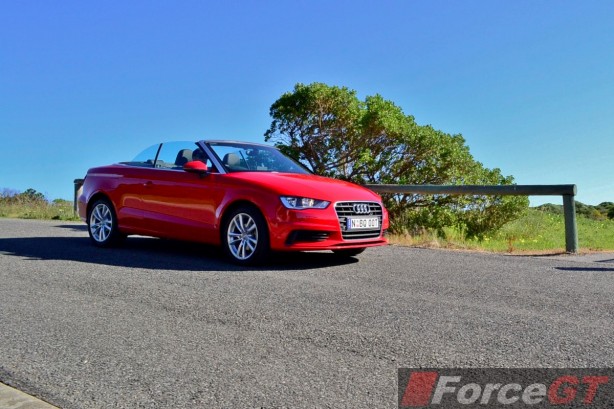 And because it’s equipped with COD (NO. Not Cash on Delivery but Cylinder On Demand) and shuts down two of its four cylinders under low load, it returns impressive fuel economy, too, averaging 6.6L to 7.6L/100km on test with about 70 per cent city driving.

The system works imperceptibly on the most part, except for what appears to be a slight wind buffeting noise coming from the engine when in two cylinder mode.

Pleasingly, there is little wind turbulence in the cabin, even at 110km/h and without the windbreaker. The car’s new ‘K-fold’ roof mechanism is one of the most significant technical changes made to the new A3 Cabriolet. It is lighter and more space efficient than the old model’s ‘Z-fold’ roof, partly contributing to the Cabriolet’s 60kg weight advantage over the superseded model. 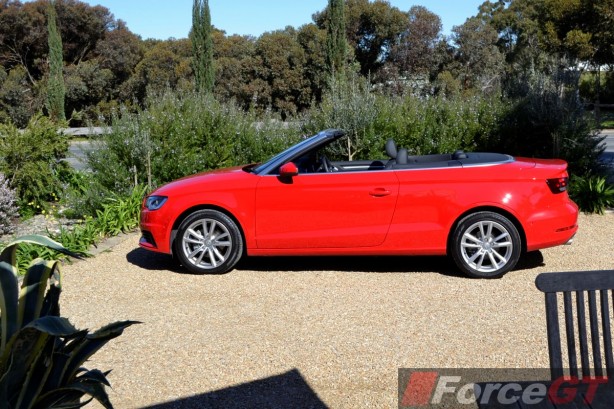 After turning off at the Mount Barker interchange, we flicked the gearlever into Sport mode and the A3 Cab immediately takes on a more energetic persona. The steering suddenly becomes meatier, while the gear shifts are decidedly crisper.

Equipped with non-adjustable standard suspension, the Cabriolet rides with the suppleness of a ballet dancer, yet retaining a sheen of firmness for good body control and relatively flat cornering stance. There is plenty of grip from the 225/45 R17 tyres and turn in is sharp. The A3’s steering is also unexpectedly communicative, unlike some others we have sampled from Ingolstadt.

On the twisty stretch between “The Strath” and Currency Creek, we are particularly impressed by just how sturdy the A3 Cabriolet feels with the roof down. Granted, you still feel more flex through the bodywork than you do in the hatch, but it takes a substantial jolt to make the A3’s solid chassis wobble. 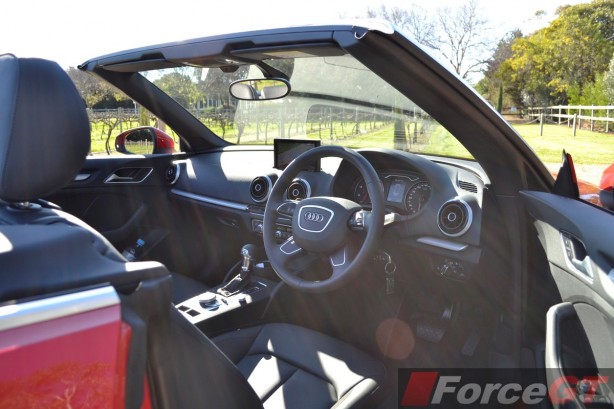 The A3’s four-seater cabin is a wonderful place to be. It is surprisingly spacious with great headroom even with the roof up. Up front, you get the same classy dashboard and instruments as the hatch and sedan. It is impeccably built and the design is clean and uncluttered. Everywhere you look and touch shouts premium.

Best of all, no part of the cabriolet’s magnesium and aluminium roof structure is visible from within the cabin. The unsightly parts are all hidden cleverly behind its black roof lining. While the test car is equipped with a $450 optional acoustic roof, cabin noise is still noticeably higher than a comparable hatch.

We reached Café No.58 as scheduled for lunch, collecting a few suicidal bugs on the Cabriolet’s back seats along the way (Yes, I’m not kidding. They missed our face but splattered themselves on the rear backrests!).

While some may still see a cabriolet as a hairdresser’s transport of choice, the fact that the A3 Cabriolet is now based on the handsome A3 Sedan has, to our eyes, shaked off some of the femininity of its predecessor.

Audi’s cheapest drop top is a competent, if not exactly engaging car to steer. There are the inevitable compromises with having the roof removed, notably in ride refinement and some rigidity sacrifices, but the new A3 Cabriolet is a well-executed small convertible, made more desirable by its efficient and refined 1.4 TFSI petrol.

If premium al fresco motoring is your aspiration, then the 2014 Audi A3 Cabriolet should be on your shortlist.