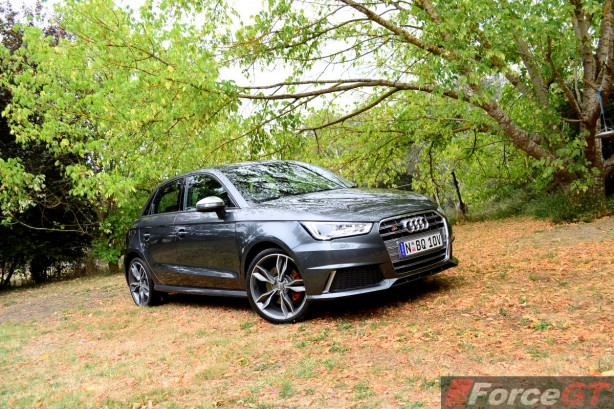 Audi’s fast growing S brand has welcomed its smallest and cheapest S model – the new Audi S1. Available solely as a Sportback (5-door) in Australia, the S1 promises to deliver the level of performance and prestige generally associated with the S badge, but at a relatively wallet-friendly proposition.

It is also the only all-wheel drive car in its class and the quickest to dash from 0-100km/h, requiring just 5.9 seconds.

And while the model is new, the badge itself is of a much older vintage. Its lineage can be traced back to the legendary Sport Quattro S1 from the 1980s – a car that saw Audi dominate the Group B World Rally Championship in its day.

So, should you put the Audi S1 on your shopping list? Let’s find out…. 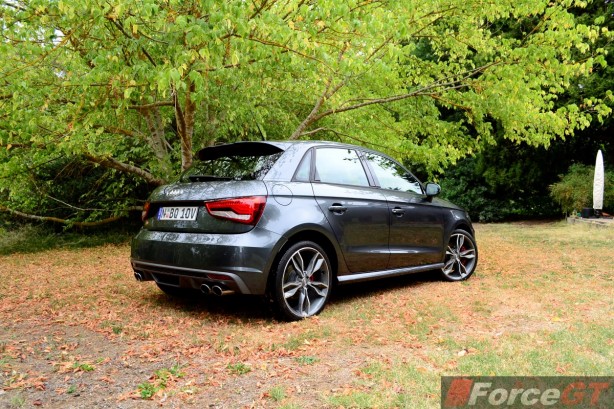 Like most prestige European sports cars these days, the S1 might not look all that different from a regular A1 on which it’s based, especially one that has been up-specced with a S Line option. But on close examination, you can tell the S1 sits 25mm closer to the ground.

There is also a deeper front bumper with enlarged air intakes to channel more air into the engine bay, along with beefier side skirts and rear bumper with four shiny protruding oval tailpipes – just like a Ferrari!

The single frame Audi grille is platinum grey with twin horizontal chrome bars and features an S1 badge – one amongst many in and outside the car, to remind its owner they are in a range-topper.

While they may look familiar, the exterior lighting on the S1 is all-new. The standard xenon plus headlights incorporates a stylised horizontal number one as its daytime running lights, which are drawn across the entire width of the headlights down into the wings. They visually stretch the front of the car, giving it a wider and flatter look. 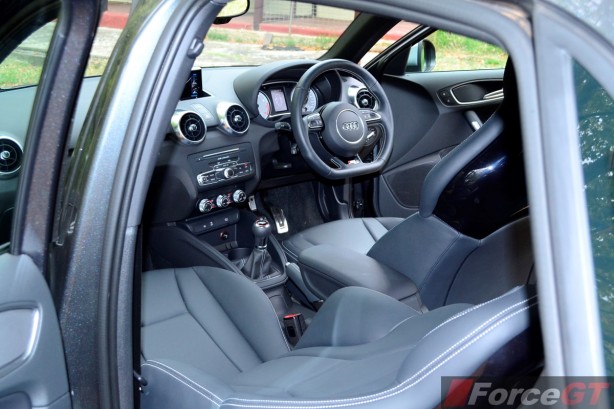 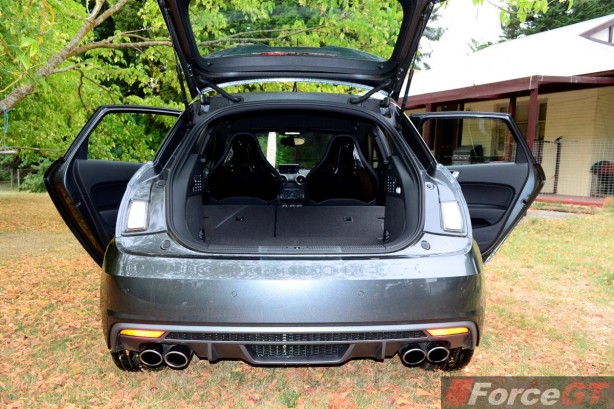 The same visual tricks are used on the other end, with the three-dimensional rear light graphics and over sized roof-mounted spoiler working together to give the car a wider and lower stance.

Inside, the cabin’s fit and finish is typical Audi and a different league to its more affordable rivals. The dash top material is rich and soft, while the knurled metal finish on the climate control, air vents and infotainment system feels like the oversized crowns of expensive Tag Heuer watches.

What’s lacking in the S1’s cockpit though, is a bit of drama. It’s S-specific dark-grey instruments, brushed stainless steel pedals and optional sports seats are about the only sporty bits in the black dominated cabin. There are no boost gauges or red seat belts. It’s all very grown-up and understated, yet undeniably classy. 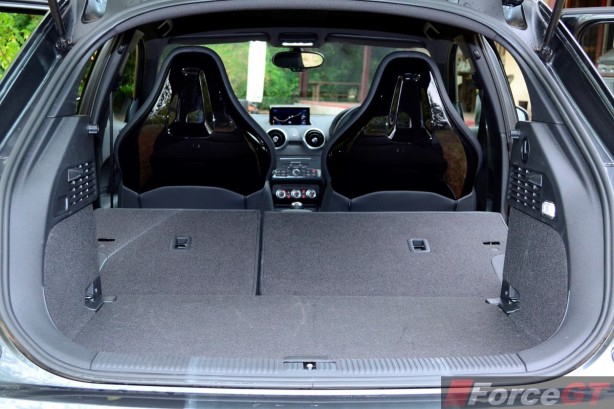 Not only is the S1 at least $10,000 more expensive than the A1, it also looses a seat at the back, seating only four.

And because the S1 uses a completely new multi-link rear suspension (instead of the regular hatch’s torsion beam setup) in order to accommodate the all-wheel-drive system, it looses around 30 per cent of its boot space – down to 210 litres, and around the same as a MINI Cooper S; although folding the rear seats liberates an extra 650 litres.

With a wheelbase 26mm shorter than a MINI Cooper, rear seat legroom isn’t the S1’s strong point, either. But if a bigger cabin is desired, you are better off looking at the A3/S3.

From a functional perspective though, the S1’s cabin is as good as any other small hatch. The driving position is spot on, the controls fall easily to hand and the 6.5-inch colour screen is crisp. The optional Fine Nappa leather covered S sport seats not only look good, but is comfortable and supportive. You also get a sonorous 465 watts, 14-speakers (including subwoofer) BOSE surround sound system with ten-channel digital amplier (part of S Performance Pack). 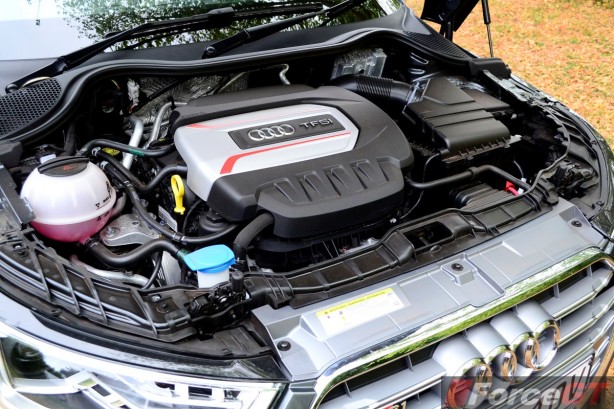 It’s a tractable unit capable of launching the hot hatch from 0-100km/h in a claimed 5.9 seconds, but despite our best efforts, we yielded no better than 6.53 seconds. The claimed figure is also a massive 1.9 seconds slower than the bigger and heavier S3, which left us wondering what the outcome could have been if Audi left the engine as it is….. 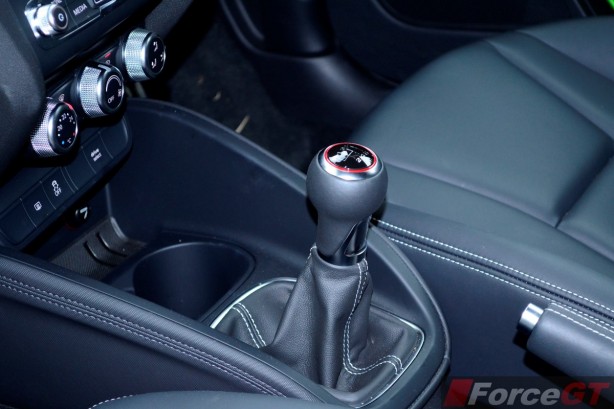 The engine is married exclusively to a slick shifting and precise six-speed manual transmission (a dual-clutch is unavailable due to packaging limitations) with a housing made out of magnesium. It transfers power to the hydraulically controlled multi-plate clutch quattro all-wheel-drive system that is mounted on the rear axle (due to weight distribution constraints). While it may scare away lazy drivers and posers, car enthusiasts will no doubt rejoice.

Audi says the quattro system is a “permanent” all-wheel-drive, but the fact is the S1 is usually front driven but the system can divert up to half of its power to the rear axle when required, such as during take off and fast cornering.

The benefit is better fuel consumption, returning an average consumption of 8.2L/100 in real world driving. 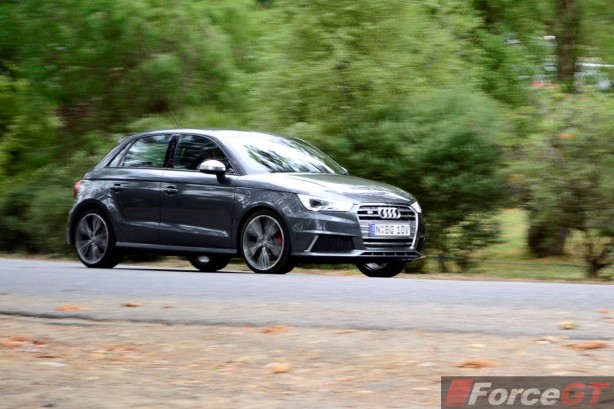 The Audi S1 is the only A1 model to get adaptive dampers. Available in three modes – Auto, Eco and Dynamic – there isn’t a great deal of difference between the modes in terms of ride comfort where its firm but not harsh; but dial up Dynamic mode and the throttle response is noticeably sharper and the steering slightly heavier. Body control is good regardless.

And due to the S1’s kerb weight of just 1,340kg, its sense of agility and light-footedness is immediate the moment you get off the line. It’s hard not to drive fast in this thing. There is no frantic front-wheel spin or tugs at the steering wheel that usually plagues powerful front-drivers. In the S1, it’s point and shoot. You’ll find yourself punching from apex to apex far faster than you’d expect.

There’s good grip from the optional 225 section Pirelli Zero tyres but the car will push wide just when you want to lean on them that little bit harder. In that respect, turn-in isn’t as crisp as its big brother, the S3. Its playfulness is brought to the fore with a tail end that is happy to snap out like a puppy’s tail, even with ESP on (in Dynamic mode, of course). 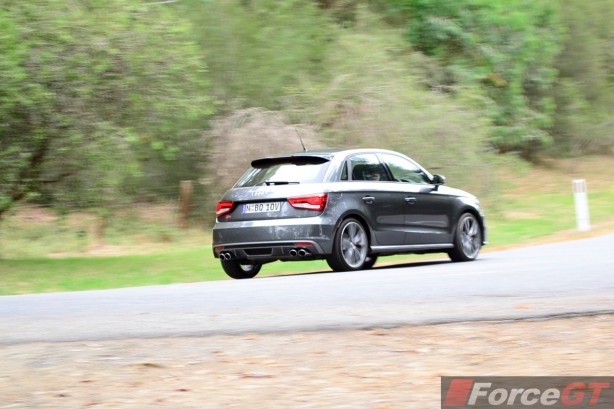 The S1’s steering, while quick, can be more responsive and feel some. What we like most is the perfect pedal placement that allows easy execution of heel-and-toe. Its clutch has a solid feel to it, but not overly heavy for town use.

The one major let down in the S1’s performance arsenal is the disappointing engine note. Around town, it just sounds like a tinny four-cylinder engine, although some purists might welcome the lack of synthesised soundtrack.

Nevertheless, on start up and open throttle, the little S1 does response with a satisfying angry bark from its active exhaust system. 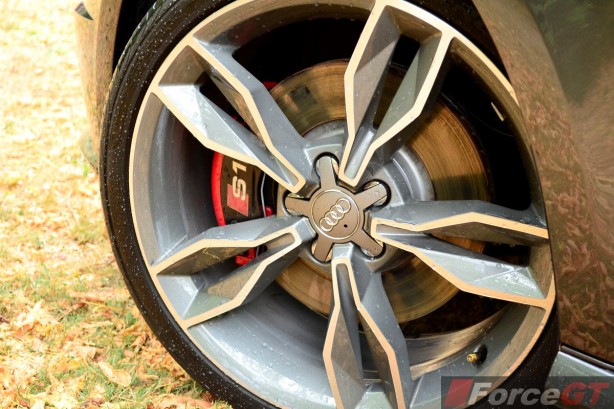 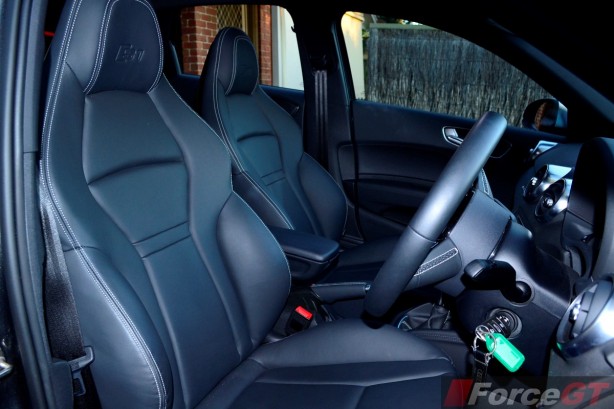 At nearly fifty big ones, the S1 Sportback can hardly be classified as cheap but you do get a plethora of kit, including 17-inch alloy wheels, Xenon plus headlights with LED daytime running lights and LED rear lights, Audi’s MMI Navigation plus with 20Gb hard drive, cloth and leather sports seats, rear parking sensors, a 10-speakers 180 watt sound system, Bluetooth, climate control aircon and automatic headlights and wipers.

However, the S1 lacks a reversing camera that is standard even on a much cheaper Honda Jazz. Oddly, it’s not even available as an option.

Then of course there is a long list of optional packages to tempt buyers to lighten their wallet further, such as the $3,990 S Performance Pack fitted to our test car.

It’s hard not to like the little S1’s dynamic prowess, scintillating performance and immaculate interior, but it’s harder to justify the Audi compared to its cheaper, yet almost just as fun rivals.

While $49,900 might seem like a bargain for a performance hot hatch from Audi, we just feel short-changed by its detuned EA888 engine, expensive options and compromised packaging. A Volkswagen Golf R Manual is just $2,090 more and you get a bigger and even faster car.

No prize for guessing where we’ll be putting our money then….