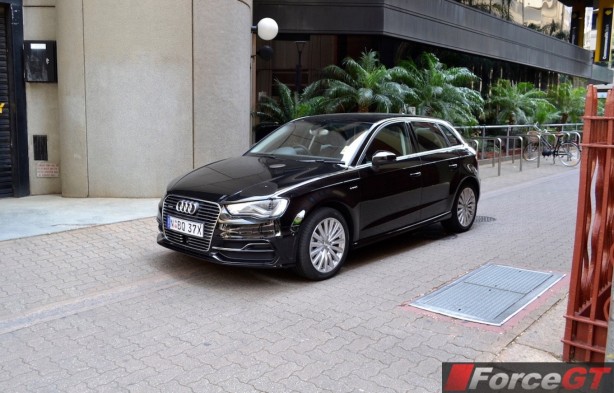 The Audi A3 Sportback e-tron is Audi’s first plug-in hybrid electric vehicle (PHEV), and only the second premium brand after BMW (with its i3) to introduce a PHEV model locally.

Unlike the distinctive i3, the A3 e-tron is virtually indistinguishable from any other A3 – a deliberate attempt, according to Audi, to gently ease buyers into its hybrids.

Audi says the A3 e-tron’s concept is easy to understand: It gives Audi’s customers an innovative and efficient mobility solution, without compromising on any of the versatility of the regular A3 Sportback. The combination of the electric motor and petrol engine also provides the kind of range people are accustomed to – a claimed combined range of 920km! 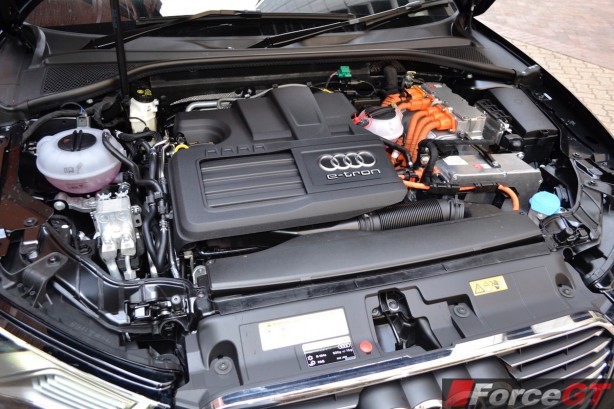 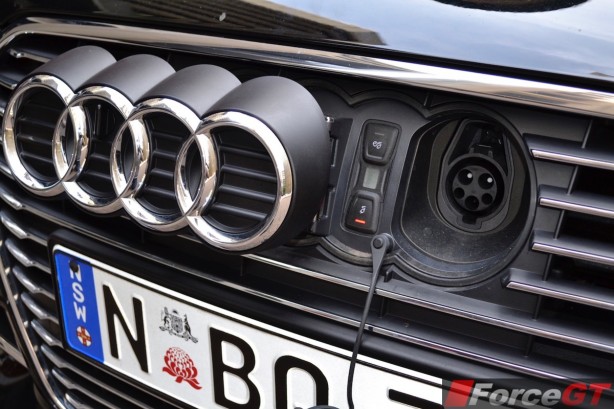 The e-tron’s electrified hybrid powertrain is a familiar one, too. At its core remains a transversely mounted, 110kW/250Nm 1.4-litre turbocharged four-cylinder petrol engine that Audi says, is one of its most advanced engines, weighing just 100kg.

While the engine is small, it isn’t sufficiently compact to enable the fitment of the electric powertrain components without adjustment. As such, the e-tron’s engine has been shifted by roughly 60mm to the right compared with a standard A3 to help make room for the extra ancillaries.

To improve thermal efficiency, the engine’s exhaust manifold is integrated into the cylinder head, quickly warming up the engine to an optimum working temperature even for those short, low-speed journeys where the engine may not be called upon.

Connected to the engine is a 75kW electric motor, fed by a 125kg, 8.8kWh lithium ion battery pack mounted beneath the rear seats. Due to packaging constraints, the petrol tank has been reduced to 40-litres and pushed back. When combined with the engine, the total system output is a Volkswagen Golf GTI-rivalling 150kW and 350Nm of torque. 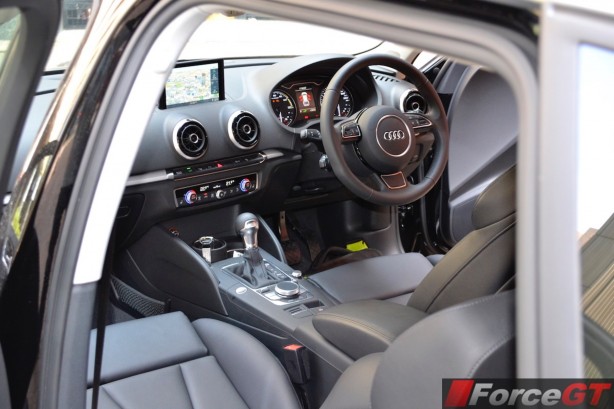 Drive is sent to the front wheels via a bespoke six-speed dual-clutch transmission; a rarity as most other PHEVS are connected to a CVT or single-speed reduction gear.

The result is a driving experience not dissimilar to that of a regular fossil fuel powered vehicle, with none of the detached throttle feel of some its parsimonious rivals.

Predictably, the A3 e-tron is 305kg porkier than a standard A3, thanks to the extra hardware. To offset some of the weight gain, the car’s bonnet and front guards are made of lightweight aluminium. Still, Audi claims the car will hit 100km/h from a standstill in 7.6 seconds. On test, it actually feels much quicker, thanks to the instantaneous rush of torque from the electric motor. 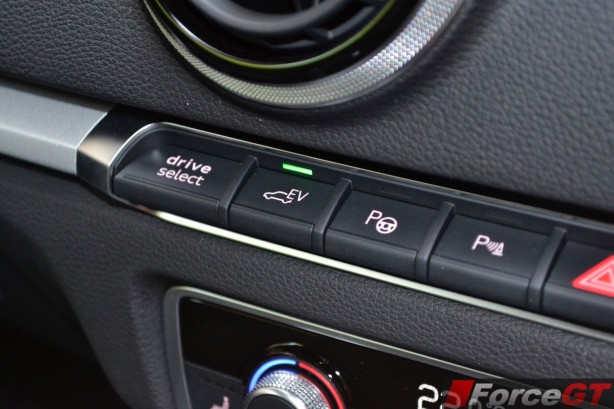 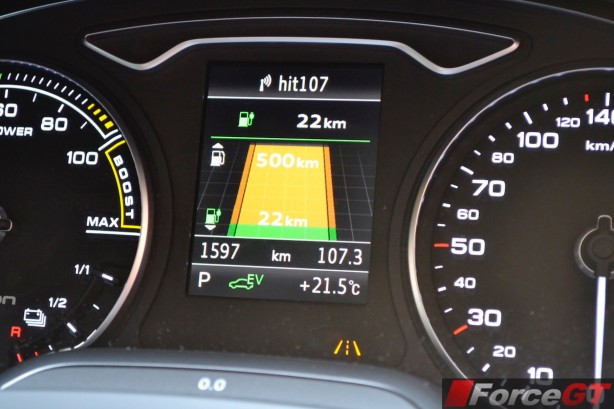 There are four driving modes to choose from: EV, Auto, Hold and Charge.

The system defaults to EV on start up, enlisting the electric motor to propel the car along silently, as long as you are gentle on the throttle, not in Sport mode and stay below 130km/h. Refinement is top notch, as you would expect from an Audi, with hardly a whiff of electric whine.

We managed around 32km on a full charge before the engine kicks in dutifully to pick up the slack.

The batteries take 5 hours to recharge using a normal household power point, or 2.5 hours with Audi’s special charge stations, which Audi will install for free with the vehicle. In day-to-day driving, the petrol engine is hardly awakened from its slumber, unless you travel more than the electric-only range.

Like a petrol engine, going uphill, hard acceleration (very addictive!) and heavy loads would all conspire to diminish the reserves of electrons far quicker than the starting range suggests.

Unusually for a hybrid, the A3 e-tron comes with a Sport setting that makes things a little livelier, as the drive mode defaults into the Hold mode, where the engine does all work. There are also steering wheel-mounted paddles that let you change gear yourself, although the drive is by no means electrifying. Nevertheless, it’s unlikely to be a deal breaker for the e-tron’s target audience. 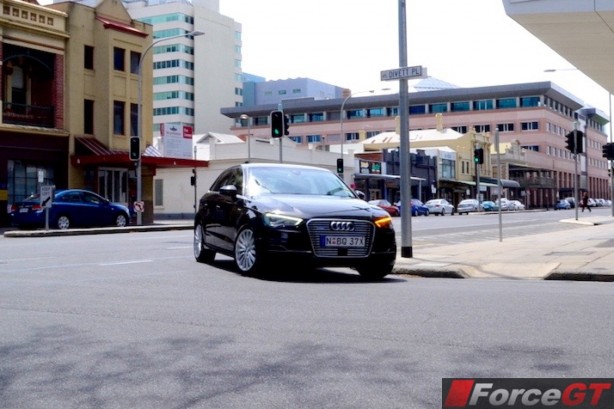 What they will appreciate is the car’s civilised demeanor, courtesy of Volkswagen Group’s MQB platform. It’s remarkably refined, affably comfortable and drives like a normal A3 Sportback.

And then there’s the e-tron’s 55/45 weight distribution, compared with a regular A3’s 60/40 front/rear split, which makes for a slightly better-balanced handling. Still, there’s no masking the extra 300kg that the e-tron is burdened with. It isn’t as agile as a normal A3 and the car’s Pirelli Cinturato 7 eco tyres are as grippy as a pair of skates on ice.

While the e-tron comes with Drive Select like regular A3’s, its scope for alteration is limited to the steering wheel’s weighting, as adaptive suspension isn’t offered even as an option. 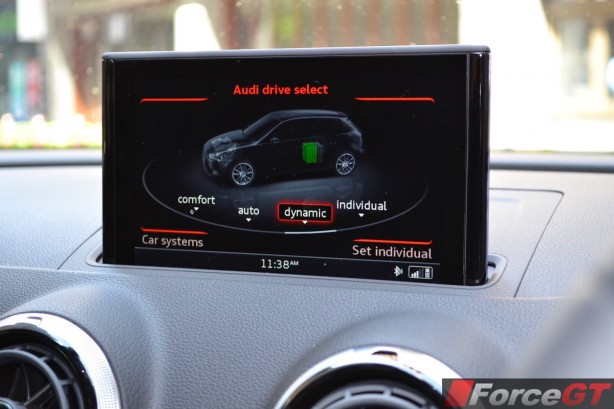 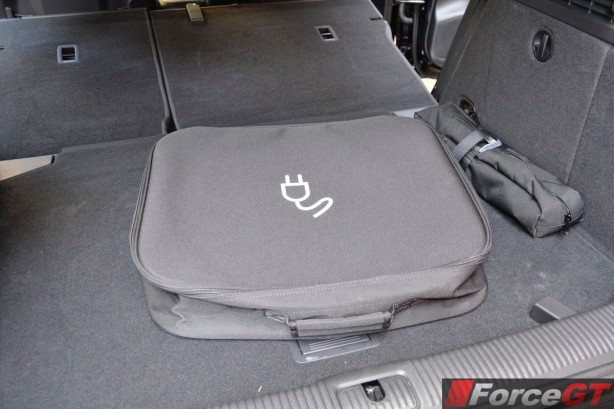 Other compromises include a slightly smaller boot space (280 litres, expanding to 1,120 litres with the rear seats folded) that also makes do without a spare tyre (a tyre repair kit is provided instead) and a sizable charger pack that lives in the boot.

Despite some of these short coming and an asking price of $62,490 plus on-road costs, Audi Australia says they have already seen strong interest for the car. To partly offset the premium, the A3 Sportback e-tron comes with a generous level of equipment.

The Audi A3 Sportback e-tron is one of the most convincing alternative-fuel vehicles we have tested. It drives and looks almost like a regular hatchback, while delivering remarkable fuel economy.

And the fact that you can use almost zero fuel in city driving but still tackle the long road trip means it could be your sole family car.

The only caveat is its Audi S3-challenging price tag. We know which one we would go for….