Mazda has taken the wraps off its first series production electric vehicle known as the Mazda MX-30 at the Tokyo Motor Show.

Underpinned by Mazda’s e-SkyActiv platform, the brand’s first fully electric vehicle is driven by a single front-mounted electric motor drawing power from a 35.5kWh battery pack nestled in the floor. It’s claimed to yield around 200km of range on a full charge. 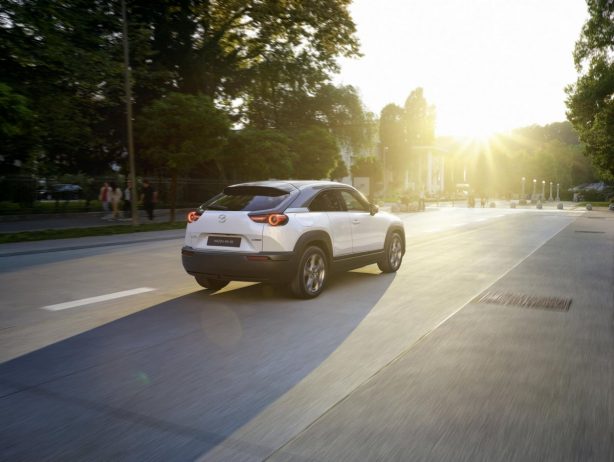 While Mazda has yet to release details about the car’s powertrain, we know that recent prototypes of the MX-30 have produces 106kW and 263Nm of torque from the same motor.

Like the company’s wider range of vehicles, the MX-30 will feature a range of safety features including autonomous emergency braking with Turn-Across Traffic detection using a millimeter-wave radar and forward-facing camera.

There’s also a new Road Keep Assist function that detects soft road edges on roads without line markings, as well as an advanced Blind Spot Assist system that prevents the driver from merging into traffic if there’s a vehicle in the blind spot. 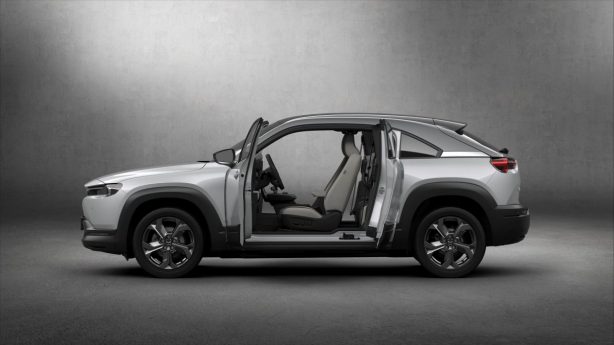 On the styling front, besides bearing a family resemblance with Mazda’s other SUVs, the highlight is no doubt the pair the unique suicide rear doors similar to those found on the now discontinued RX-8.

Inside, the dashboard has a floating theme with a raise centre console that meets a touchscreen display for the climate control. Mazda has also chosen some interesting materials for the interior, including the console tray which is made of cork. Mazda says it has been designed to emphasise the texture and visual warmth of the material.

Elsewhere, the door trim features a fibrous material made from recycled plastic bottles with a texture that seems to contain air to create a sense of openness within the cabin.