Toyota Hilux Tonka Concept is king of the sandpit 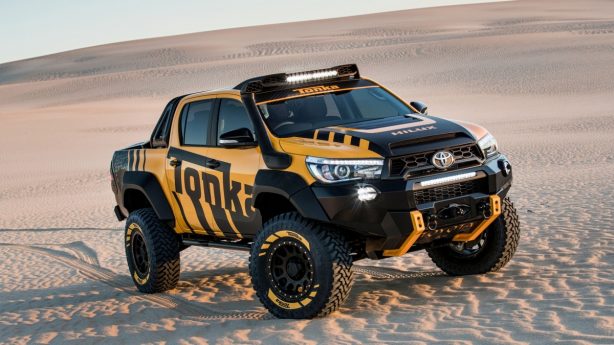 Toyota is giving grown ups a chance to relive their childhood with a new Hilux-based concept. Dubbed the Hilux Tonka Concept, it is a full-size dream toy for adults that combine the toughness and durability in Toyota and toymaker, Tonka’s DNAs.

It was conceived, designed, assembled and tested by designers and engineers from Toyota Australia’s 150-strong product planning and development division. 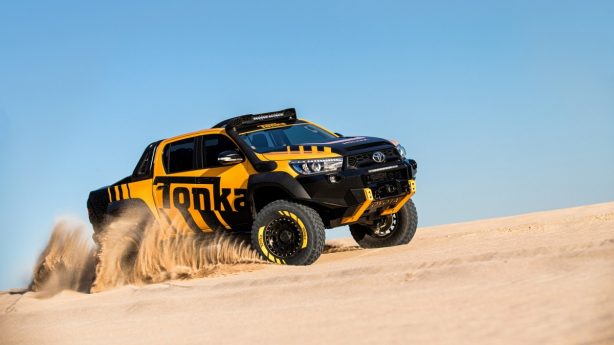 Product design chief, Nicolas Hogios, said the extreme style and capability of the HiLux Tonka Concept would capture the imagination of kids and adults alike.

“We have taken Tonka out of the sand pit and reinvented HiLux from top to bottom and from nose to tail,” Mr Hogios said.

“Inspired by the Tonka trucks that kids play with in their backyards, the HiLux Tonka Concept goes way beyond the already hugely capable abilities of HiLux to traverse rocks and other rugged terrain,” he said.

“The HiLux Tonka Concept is dramatic evidence that our local team loves to have fun, we’re keen to explore new ideas and we’re always looking to push the boundaries of what’s possible,” he said. 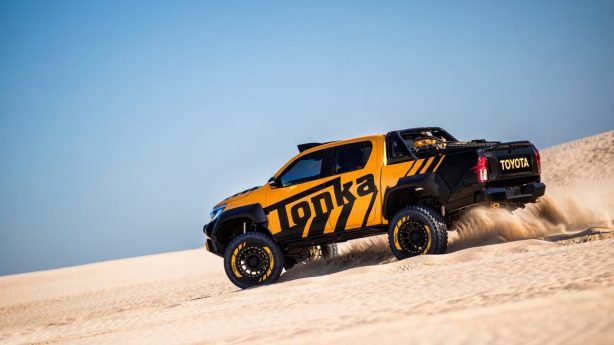 Underneath the dramatic black-and-yellow livery of the HiLux Tonka Concept is the top-of-the-range production HiLux – the SR5 double cab with a 2.8-litre four-cylinder turbo-diesel engine.

An extensive makeover starts with substantially extra ground clearance – an increase in ride height of 150mm (6 inches). Combined with a high-riding axle, heavy-duty suspension and 35-inch diameter tyres, Toyota says the HiLux Tonka Concept is equipped to power over rugged terrain that would be off-limits to other off-roaders.

A new front bar is compatible with the vehicle’s safety systems while the bonnet has a carbon-fibre skin and features an aggressive “power bulge” and air scoops. 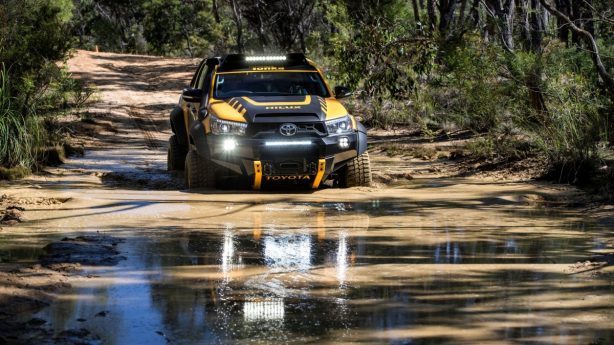 A rugged bash plate made from 6mm-thick alloy is designed to protect the sump and other vital components. Tubular side rails protect the body and chassis.

Behind the cabin, almost everything has been changed. The transformation includes a new tailgate, also wrapped in carbon fibre, that incorporates an integrated spoiler and two air vents for optimal airflow. A durable, lightweight strap rather than a handle releases the tailgate. 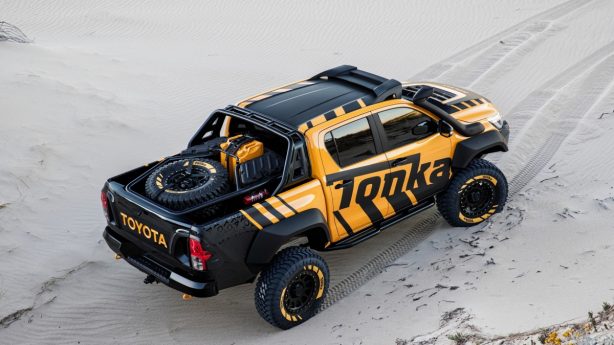 Inside the tub, a removable tubular frame keeps all the gear in place, including diesel fuel cans, while storage boxes house the recovery gear needed for extreme off-road driving. A fire extinguisher, axe, shovel and high-lift jack are also fitted.

Tonka is a household name, celebrating its 70th anniversary this year. Equally renowned, Toyota is in its 80th year of incorporation.

Last year, HiLux became the first vehicle other than a passenger car to be the best-selling vehicle in the country.

Sadly, the Hilux Tonka Concept will not be going into series production but the concept will be on tour around the country.