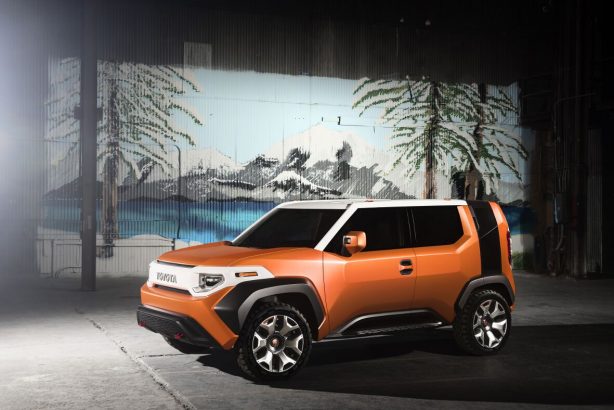 Toyota has reincarnated the spirit of its FJ Cruiser with the world premiere of the FT-4X Concept at the New York auto show. Short for Future Toyota 4WD Crossover, the FT-4X is a four-wheel-drive toolbox penned by Toyota’s Calty Design Research studio in California, the same design house that penned the stunning Lexus LF-LC concept.

Like the FJ Cruiser, the FT-4X features compact, sturdy dimensions, with a “rugged charm” design that places value on simplicity, capability, durability and Toyota lineage.

“The FT-4X is not simply a concept where style meets function; it is a thoughtful, charming and engaging experience that adds real pleasure and convenience to the journey,” Mr Hunter said.

“We focused on how a crossover vehicle can add fun and value to casual adventures both in and out of the city, thinking about how someone would use it, and what they would love to do with it.” 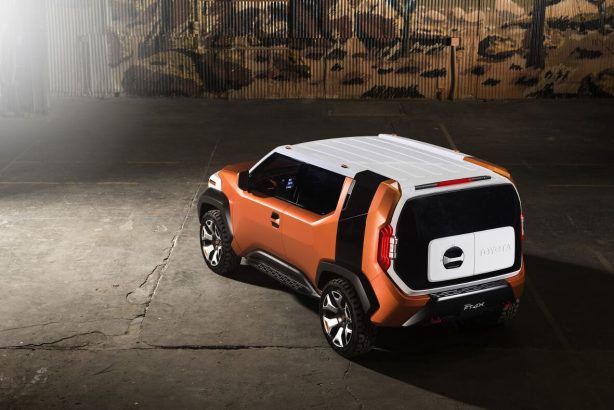 Based on the Toyota New Global Architecture C-platform, the FT-4X is inspired by a simple, sturdy “X theme”. At the sides, a vertical X is shaped to provide the widest point at the door handle, creating a natural protective zone for the occupants. A similar treatment is used for the tailgate.

Designers also developed a horizontal X theme that accentuates the rugged 18-inch wheels at each corner of the vehicle. 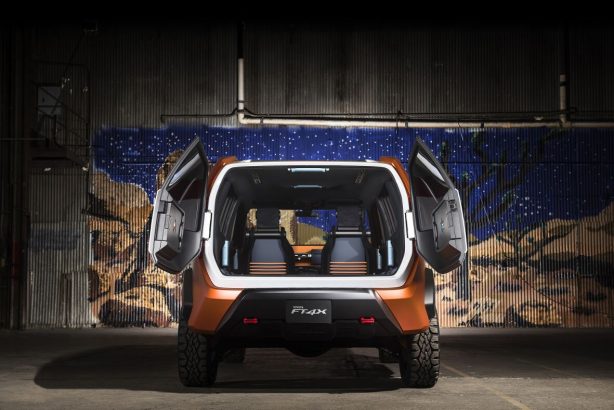 The adventurous theme continues throughout the SUV with a Multi-Hatch tailgate that opens two ways: in urban mode, a horizontal opening splits the hatch in half and makes it easier for kerbside loading of gear. In outdoor mode, the one-piece door opens upwards to create a shelter from the elements. The rotatable tailgate handle is shaped so it can be gripped by a gloved hand.

Elsewhere, twin red hooks in the front and rear bumpers provide secure anchor points for vehicle recovery and for tying down loads.

A vertical picture window set above the driver’s side rear fender can be removed and swapped with multiple opaque colour or tinted class options, allowing owners to personalise their FT-4X. 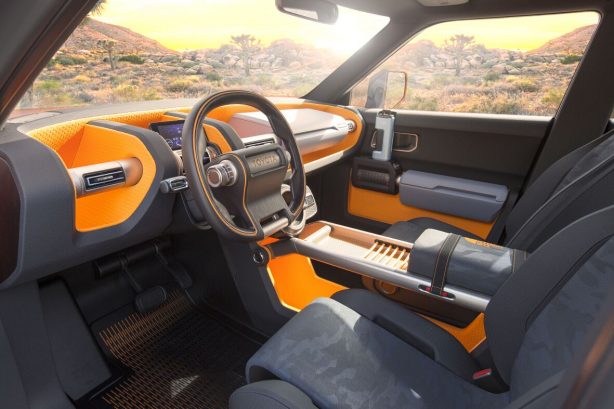 The FT-4X interior presents a large accessible space for equipment with blue colouring for closed storage and orange for open storage. Twin boxes in the cargo area – one warm, the other cold – are designated for functions such as storing snacks, warming gloves or cooling ice-packs.

A flat cargo floor is fitted with tracks for securing gear and conceals a deep storage compartment, which can be accessed by sliding the floor out. Ahead of the cargo zone is a wet zone for stowing damp clothing or muddy boots while front passengers sit in a clean zone.

Innovations are abound throughout the rest of the cabin. Rear-door armrests have USB outlets and big, rotatable window switches; front and rear door handles serve as water bottles; removable inside rear lighting doubles as a torch; and the dome light can serve as an exterior locator or beacon.

An ultra-compact The North Face sleeping bag fits neatly between the front seats and functions as an armrest above an extra-large dividing console with more storage space. Its breathable, high-grip, hybrid mesh surface is said to allow for wet items to dry quickly while its bungee cord lattices keep small items in place. 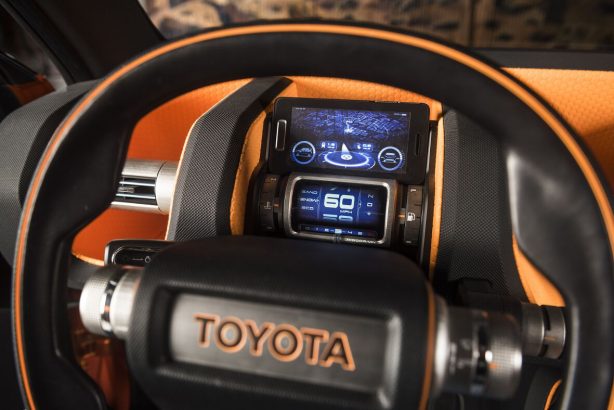 The blue and orange storage themes continue in the dashboard with a larger blue chest that appears to float above a carved orange bin. Other clever features include a mobile-phone mount directly above the cylindrical digital instrument cluster and a removable multimedia system that is part boom box and part in-dash stereo, engineered with an extra-large handle grip.

While nothing is confirmed, the FT-4X could be hinting at a successor to the retro-inspired FJ Cruiser. Launched in 2011, more than 11,000 FJ Cruisers have found homes in Australia – a figure considerably higher than originally expected.  Production ended in August 2016 with no replacement announced.