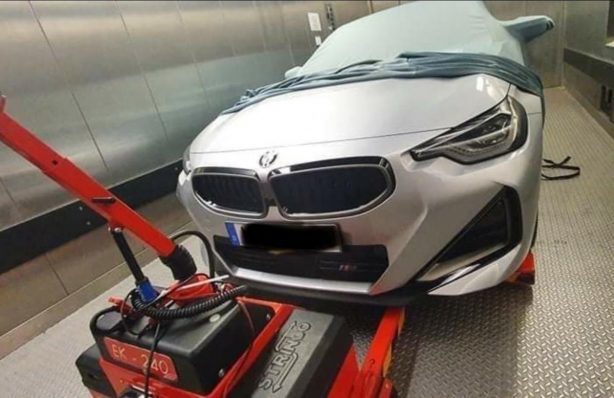 A couple of revealing spy photos of the upcoming G42 BMW 2 Series Coupé has been leaked online over the weekend.

Posted by a member of 2addict forums on a Facebook group, the photos show the 2 Series inside what appears to be a vehicle lift in Germany.

Significantly, what’s immediately obvious – and possibly to the relief of many – is the absence of BMW’s gigantic grille that is quickly becoming commonplace in its new range. Instead, the two-door model sports a stubbier evolution of the current car’s double kidney grille flanked by a pair of deeply set concave headlights.

Around the back, the rear fascia is more squared-off than before and features a set of smoked taillights, chunky black diffuser and accentuated lip spoiler.

The car shown is also likely sporting a M Sports bodykit, if not the sports-oriented M240i; thanks to the ‘M’ badges lurking on the front and rear of the car.

Unlike the front- and all-wheel drive 2 Series Gran Coupe range which shares it name, the G24 will retain its rear-wheel drive layout and the availability of straight-six engines. It is expected to be based on the same CLAR platform as the latest 3 Series, making it the only compact-sized RWD BMW.

The new 2 Series Coupé is expected to be revealed in 2021, followed by an M2 flagship further down the track.

Previous 2020 Toyota GR Supra GTS Review
Next Is this the 2022 Volkswagen Scirocco?