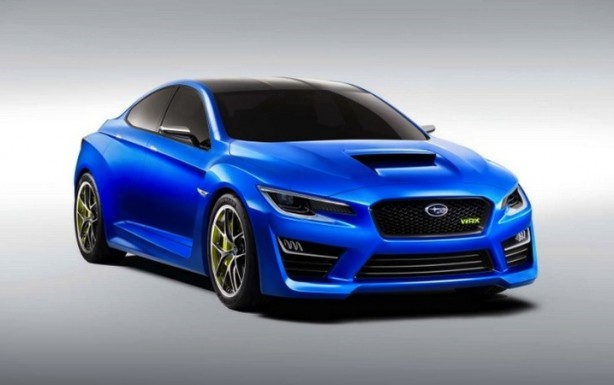 We know that Subaru is preparing two new concepts for the 2013 New York Auto Show and one of them is speculated to be the next-generation Subaru WRX. Now, French website, Blog Automobile, has published a series of images alleged to be the exterior design of the new concept.

Looking like a four-door version of the company’s BRZ coupé, the concept looks striking, especially in the WRX’s trademark blue exterior paint. If the concept makes it to production, it will mark an end of a ‘rather be forgotten era’ of ho-hum designs from Subaru. 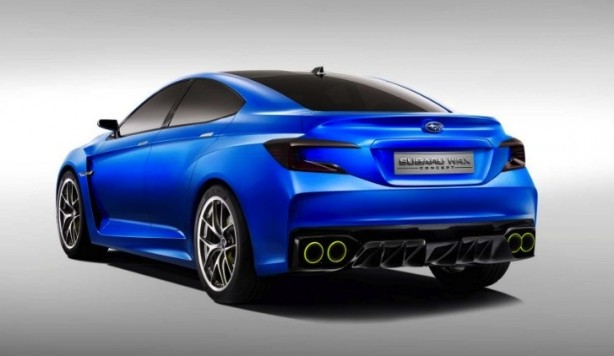 The front of the car looks menacing, with its upright six-point grille and slim-line headlights. It seems the designers are also keen to carry over the WRX’s famous bonnet scoop to the new car. The bulbous wheel arches and aggressive rear diffuser with quad exhaust pipes complete the sporty styling.

Much has been said about the WRX’s powerplant, but there are widespread speculations it will be powered by a turbocharged four-cylinder Boxer engine capable of up to 224kW of power. Rumour also has it that some form of all-wheel drive hybrid system is also on the cards.

But for now, they remain speculations until more are revealed at tomorrow’s New York Auto Show.

Update: Full press release from Subaru at the 2013 New York Auto Show after the jump.

New York –  Subaru of America, Inc. today unveiled the SUBARU WRX CONCEPT at the 2013 New York International Auto Show at the Jacob K. Javits Center. The design concept hints at the design language of the next generation WRX.

The bold and muscular design emphasizes turbocharged power and AWD grip in a more agile and athletic form. The SUBARU WRX CONCEPT blends the WRX’s famous power and road-holding prowess with an even greater focus on sharp handling, steering and communicative chassis. To further improve handling dynamics, the SUBARU WRX CONCEPT features a carbon-fiber roof to enhance the already low center of gravity and reduce weight.

Considerably lower, sleeker and wider, the SUBARU WRX CONCEPT delivers even more street presence than previous generations of WRX. The new grille design is larger and bolder and sets off the classic WRX hood scoop. A pronounced powerbulge provides clearance for the new turbocharged engine and intercooler. A prominent hexagonal grille form and deep lower valences with air intakes are designed to enhance aerodynamics, add downforce and aid engine cooling.

The three dimensional mesh pattern of the grille denotes the sporting nature of the SUBARU WRX CONCEPT and sets the Subaru star cluster apart, while the new hawk-eye headlights integrate the Subaru family design heritage.

A sharp character line runs from the front corner through to the taillights, intersected by the boldly flared wheel arches emphasizing the Subaru’s AWD system. The compact cabin greenhouse draws attention to the power and solidity of the body and focuses attention to wide stance that provides a visual link between body and chassis.

The rear design echoes the hexagonal design motif from the front grille and features a dramatically curved trunk lid that also acts as a rear spoiler. The distinctive wide rear bumper of the SUBARU WRX CONCEPT adds to the powerful street presence of the car and is off-set by large quad tailpipes denoting the powerful turbocharged engine. The aggressive rear diffuser improves vehicles aerodynamics.

The all-new SUBARU WRX CONCEPT features a new paint color, “WR Blue Pearl III”, which modernizes the iconic WRX look. Fluorescent Yellow is used as an accent on the WRX badge on the front grille, the brake calipers and the exhaust tip finishers, adding character notes to the design.

Filling out the broad fenders are BBS “RI-D” One Piece Forged Duralumin wheels and featuring 245/40ZR20 Dunlop tires with an exclusive tread pattern.