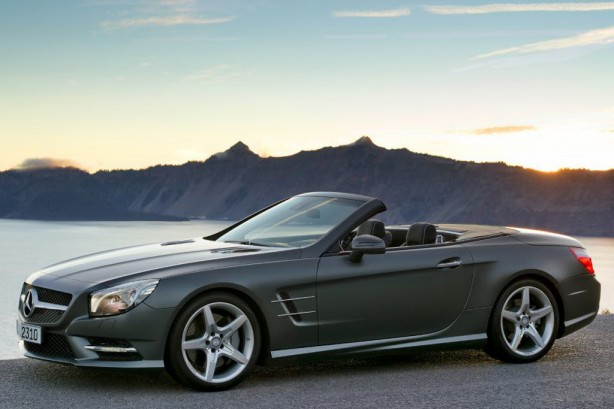 Mercedes Benz’s most expensive non AMG coupé has broken cover. The new Mercedes SL is touted to be “the ultimate in passionate, refined motoring” by its maker when it arrives in showrooms starting mid 2012. The original 300SL was the first German sports car to win the Le Mans 24 Hours almost 60 years ago.

The 6th generation SL is built on an all new platform and continues to employ a folding metal ‘vario-roof’ which takes less than 20 seconds to open. Like its predecessor, the new SL, code named R231, uses longitudinal V6 and V8 petrol engines to drive the rear wheels. 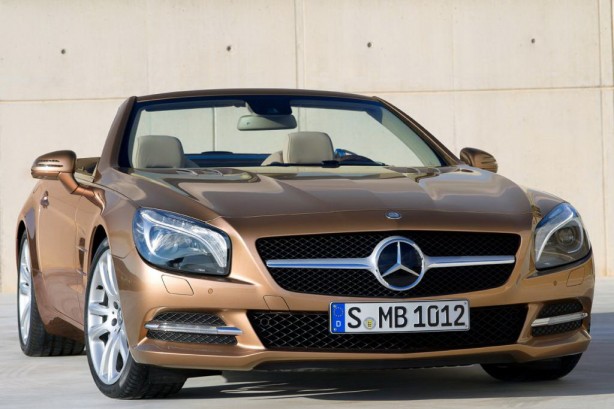 Like all of Mercedes’ current range of sports cars, including the SLS AMG, the new SL features a retro inspired face, with strong references to the 1960s ‘pagoda’ SL and 1970s R107. The prominent upright front grille also bears a strong resemblance to the company’s aforementioned supercar. Lines on the strictly 2 seater sports car is cleaner but is accentuated by a strong shoulder line running from the headlight to the tail-lamp. It is an elegant design.

Mercedes claims the new SL is the most aerodynamically efficient vehicle in its class and sets new benchmark for wind noise-based cabin refinement. However, the car’s biggest technological advancement is under the skin. It is the first volume production Mercedes to be built almost entirely of aluminium. Made from a mix of chill cast, vacuum die cast, stamped and extruded aluminium, this body-in-white superstructure allows the new SL to be between 125kg and 140kg lighter than the outgoing steel car, and 20 per cent more torsional rigidity.

The metal castings and tailored blanks of the SL’s body-in-white are bonded together using various techniques, depending on the load they transmit. While some parts of the underbody are MIG welded, hemmed, bonded and bolted together, others are joined via state-of-the-art friction stir welding — a technique that allows for particularly stiff, precise joins.

Although the car’s body panels are constructed mainly of aluminium, its ‘soft nose’ grille is made of plastic for pedestrian protection. Other non-aluminium parts include the SL’s super-lightweight magnesium rear bulkhead. Steel is still used in the tubular steel A-pillars and header rails due to its enormous strength, required in the event of a rollover.

The suspension layout on the new SL is similar to its predecessor, with multi-link set up both front and rear. It is tuned to suit the car’s laid-back dynamic character, but with a touch of dynamism thrown in. The SL350 will come equipped with steel springs with ‘semi-active’ dampers. Mercedes’ self-levelling, height-adjustable, hydraulically controlled Active Body Control chassis will be available as an option. 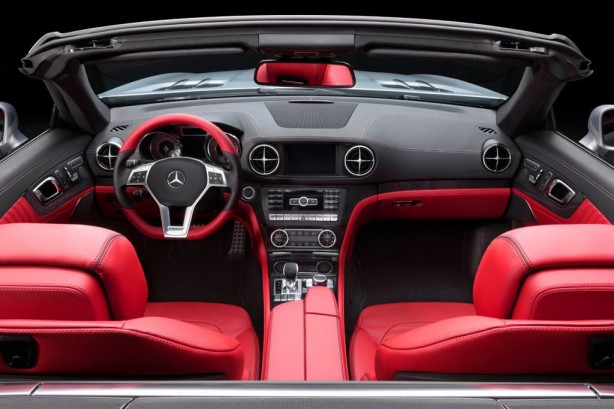 The new car’s steering features a new electro-mechanical ‘direct steer’ set-up with variable assistance levels and a variable ratio. The SL’s beautifully designed folding roof frame is made out of magnesium and weighs 6kg less than that of the outgoing car. This not only helps with the car’s overall weight but also contributes to a lower centre of gravity.

The Stuttgart company will offer the same optional electro-chromatic panoramic glass sunroof on the SL, first seen in the smaller SLK convertible. The Magic Sky Control system lets the driver choose between transparent glass, light shade and dark shade at a push of a button.

A first for the SL is its ‘Frontbass’ audio system that uses bass loudspeakers mounted in the front bulkhead rather than in the door panels. The idea behind it is that the rigid construction of the bulkhead provides better sound resonance and less distortion than a conventional system. The cone-like shape of the foot well also acts as a natural amplifier.

The other technological premier is a high-precision windscreen wash-wipe system called Magic Vision Control. The system flushes water through jets integrated into the rubber of the wiper blade. It deploys water just ahead of the leading edge of the wiper, on both the upstroke and downstroke of the blades, to minimise wastage and mess and improve visibility. They can also be optionally equipped with heated wiper blades, heated fluid supply lines and a heated washer fluid for the cold winters.