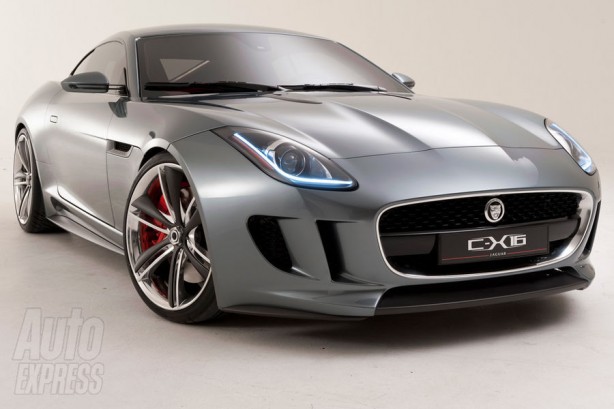 Jaguar has revealed its Porsche Cayman rival that promises beauty, performance and efficiency in one magnificent package. It’s called the C-X16 (as it’s the 16th project Design Director, Ian Callum, and his team have worked on), the spiritual successor to the highly desirable Jaguar E-Type the world fell in love with fifty years ago.

The C-X16 will also be Jaguar’s first hybrid model when it hits production. According to our source at AutoExpress, the C-X16 will come as a roadster as well as coupé. The car you see on this page will make its world premiere at next week’s Frankfurt Motor Show. 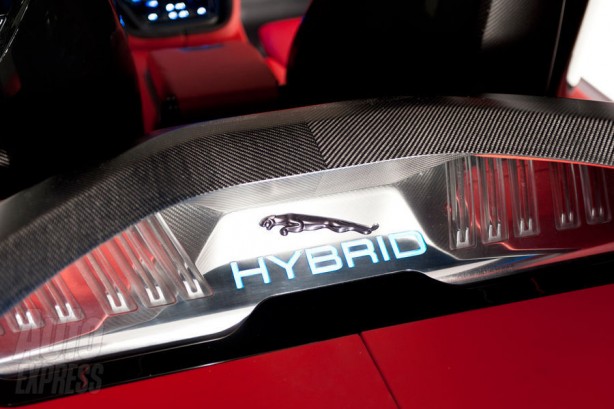 Underneath the long elegant bonnet lies a 3.0-litre supercharged V6 producing 375bhp (276kW) and 450Nm of torque. This engine is derived from Jaquar’s 5.0-litre V8 which currently serves the XFR, XKR and XJ Supersports. It is a direct injected engine and features a twin-vortex supercharger for more precise boost control and lower fuel comsumption.

The V6 is assisted by an electric motor, producing 95bhp (71kW) and 235Nm of torque. This is coupled to an 8-speed ZF automatic gearbox, and draws its power from a lithium-ion battery pack behind the seats. It can run on electric only mode for short distances but with a top speed of around 80km/h. The C-X16 also has an F1 inspired ‘push to pass’ button which provides the car with an additional burst of torque for up to 10 seconds, useful for overtaking. 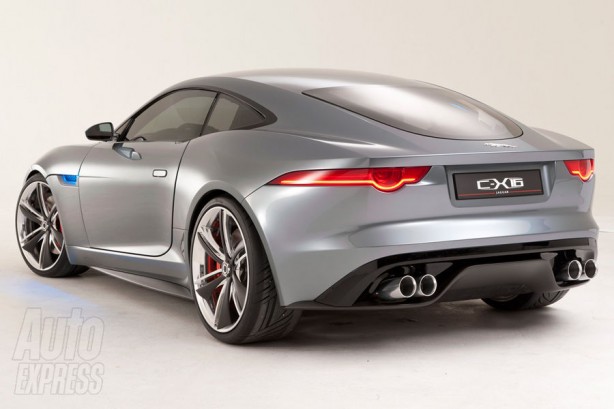 In terms of dimensions, the C-X16 is 98mm shorter than its nemesis, the Porsche Cayman, at 4,445mm. It is however, at least 150mm wider than the Cayman as well as lower.

“Of all the Jaguars I’ve ever designed, this is the one I want to own most,” said Ian Callum.

The C-X16 wears Jaguar’s latest design language but with inspiration drawn from the C-X75 concept, such as the grille and taillights which extend around the corners of the car.

The stunning looking Jag rides on gorgeous 21-inch alloys, with carbon fibre fins. The blue LED lighting on the front fenders provides an distinguishing touch to the fluid silhouette of the car. Inspiration from the E-Type comes in the shape of the side-hinged rear screen, which exposes the hybrid module and a load deck.

In an attempt to improve the aerodynamics, the machined aluminium door handles sit flush with the bodywork, but pop out when they sense the motion of your hand, much like the Mercedes SLS’s gullwing door handles. The body is also free of spoilers or wings – down force is provided by a subtle front splitter and a rear diffuser and side sills.

To keep weight in check, all these are made of the now almost ubiquitous carbon fibre. However, most of the car’s 1,600kg kerbweight is down to the extensive use of aluminium in the C-X16 chassis and bodywork. 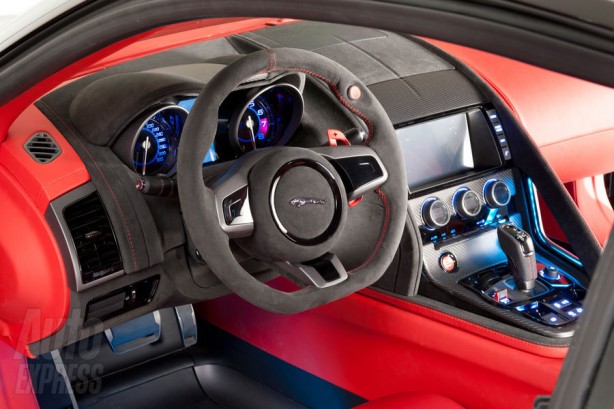 Carbon fibre is also used in the interior of the car – on the dash and as a spine to reinforce the ultra-light composite seats. There is also a carbon bracing bar that flows from the centre console before splitting in two and bolting to the rear suspension to boost rigidity.

The dash, seats and headlining are covered in bright red leather and alcantara. Unlike recent Jaguars’ rotary gear selector, the C-X16 is equipped with a conventional gear lever. Other highlights in the cabin includes a unique double vent system that is hidden until the climate control decides it’s needed – at which point it pops up and gives what Jag calls “an intense blast of hot or cold air to rapidly alter the cabin temperature”, before sinking down.