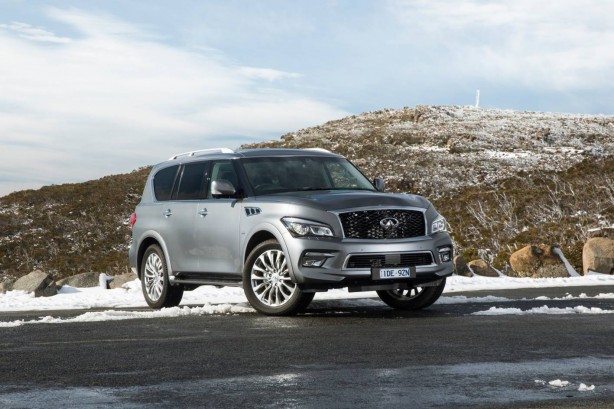 Infiniti’s newly launched full-size SUV, the QX80, is now officially on sale in Australia priced from $110,900 plus on-roads.

Described as “luxurious and sophisticated”, the Infiniti QX80 is the Japanese premium brand’s flagship SUV and its arrival this month heralds the start of Infiniti’s next phase of new-model releases in Australia.

Jean-Philippe Roux, the Managing Director of Infiniti Cars Australia, said the Infiniti QX80 is a commanding SUV that will meet the specific needs of premium SUV buyers.

“The QX80 is among the most luxurious and generously appointed SUVs available in the world,” he said. “It is spacious, elegant and has an incredible presence, and it positions Infiniti squarely in this important vehicle segment.”

According to Roux, adding the QX80 to Infiniti’s Australian catalogue is a logical move.

“A number of buyers have asked us for a model at least one size up from the QX70 crossover. Adding the QX80 to our local catalogue in small volumes will meet this local opportunity.” 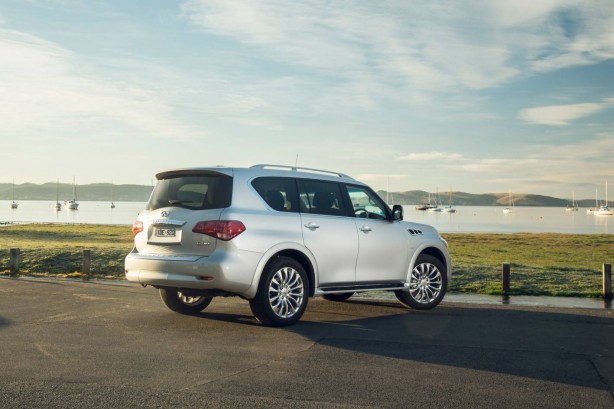 The arrival of the QX80 in July will be the first in a series of new-model additions for Infiniti in Australia. From early next year, three all-new models are scheduled to be released: the Q30 active compact, the QX30 active crossover, and the production version of the evocative Q60 Concept 2+2 coupe, which made its world premiere at this year’s Detroit Motor Show in January.

Partnering the V8 engine is a seven-speed automatic gearbox that features Adaptive Shift Control (ASC) and selectable manual mode with Downshift Rev Matching (DRM). The seven-speed transmission is the centre-point in the QX80’s ALL-MODE 4X4 system, which has been designed to distribute torque to all four wheels according to the road’s conditions, with up to 50 percent of drive available to the front wheels on demand, helping to enhance traction according to conditions.

The QX80’s body structure has a high-stiffness design for enhanced ride comfort and reduced noise, vibration and harshness. The body-on-frame layout employs an independent suspension design with double wishbones both front and rear.

Hydraulic chambers integrated into each shock absorber automatically control the QX80’s suspension travel. The chambers are cross-connected by piping that allows for the transfer of hydraulic fluid, managed seamlessly by nitrogen-charged accumulators, from one side of the vehicle to the other. When cornering, roll stiffness is increased, reducing the amount of body lean over the outside wheels.

The system is able to vary suspension travel independently on either side of the vehicle, creating a flat and stable ride.

When driving off-road, the lack of anti-roll bars allows the suspension to rise and fall more freely, improving traction and allowing the driver to traverse tougher terrain.

Drivers will enjoy the response from the QX80’s vehicle speed-sensitive power steering and the comfort from the standard-fitment heated and leather-bound steering wheel, which is electrically adjustable for both reach and rake. 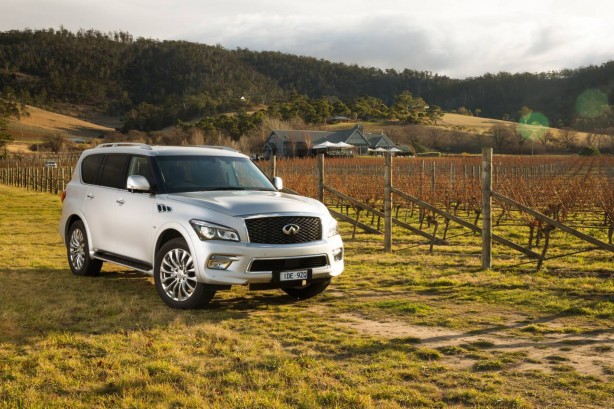 The interior of the QX80 sits up to eight occupants. The three seating rows are arranged in a two-three-three format with third-row passengers able to access their seats via the electrically controlled second-row, 60:40 split-fold seats, which flip into their access position at the touch of a button. The second row seats also recline for optimum comfort.

Premium semi-aniline leather upholstery is fitted to all seats. The single upholstery colour – Graphite – is complemented by Stratford Burl trim.

Among the QX80’s premium entertainment and technology features are an eight-inch WVGA colour touch-screen display, Infiniti Controller for use with vehicle information systems and comfort and convenience features, and the Infiniti Hard Drive Navigation System. Bluetooth® Hands-free Phone System and audio streaming are also standard.

The rear-seat entertainment system features dual seven-inch colour monitors, two pairs of wireless headphones, wireless remote control, auxiliary input jacks and a 120V power outlet. The system allows playback of games or movies in the rear, while front occupants can listen to audio, all at the same time.

The QX80 is equipped with a comprehensive arsenal of active and passive safety features including: