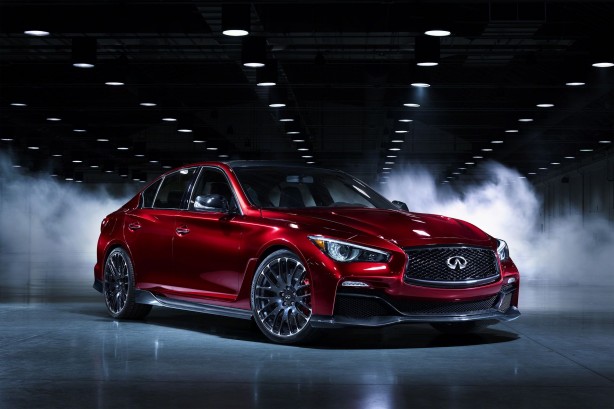 Infiniti teased us with the Q50 Eau Rouge at the 2014 North American Motor Show, a concept aimed to gauge public response for a hardcore Infiniti compact executive hunting for the likes of BMW M3 and Mercedes-Benz C63 AMG.

For a start, it looks all business. Based on the standard Q50, the aggressive transformation sees the Eau Rouge draping totally redesigned front and rear bumpers, side skirts, a new bonnet, new boot lid and loads of carbon fibre. Its bespoke aerodynamic carbon fiber bodywork is heavily infused with formula one aerodynamic elements, such as the front splitter and deep rear diffuser. 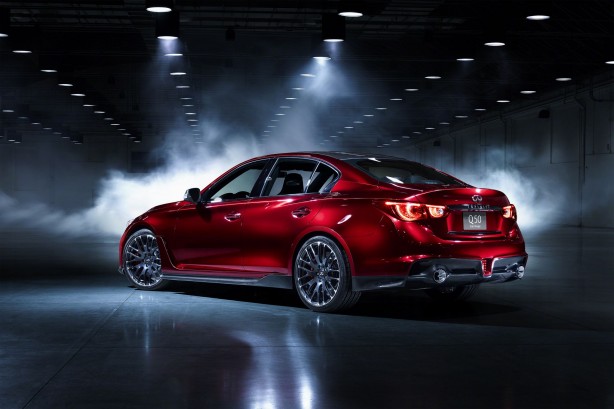 Infiniti describes it as a design inspired by muscularity, aerodynamics, refinement, and understated power. But what’s going under the bonnet?

“If we built this car I would expect it to feature over 500hp and 600lb/ft of torque. Through our various alliance partners we have access to a range of engines featuring this performance capability which, with a fair amount of engineering effort, can be developed to exhibit Infiniti character and accommodated within the Q50 engine bay. The engine we are evaluating for the Q50 Eau Rouge is a big personality, V-cylinder engine with forced induction. I think our engineers have been waiting for a project like this,”

Almost every exterior panel is bespoke to the Q50 Eau Rouge, with only the front doors and the arch of the roof pillars retained as standard components. 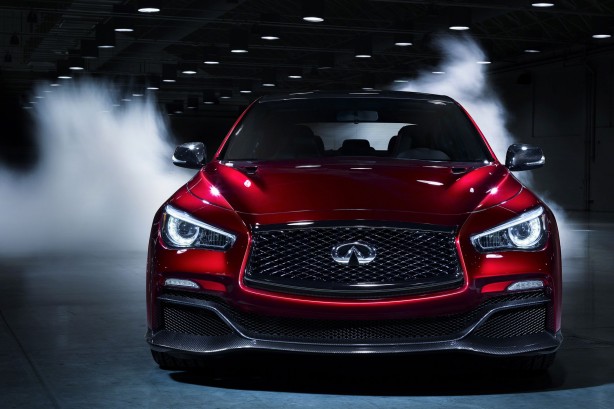 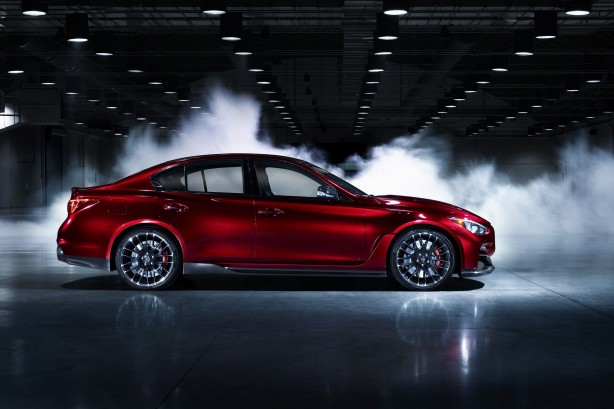 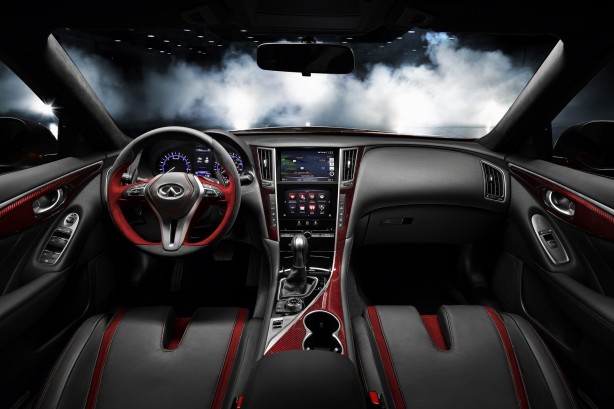 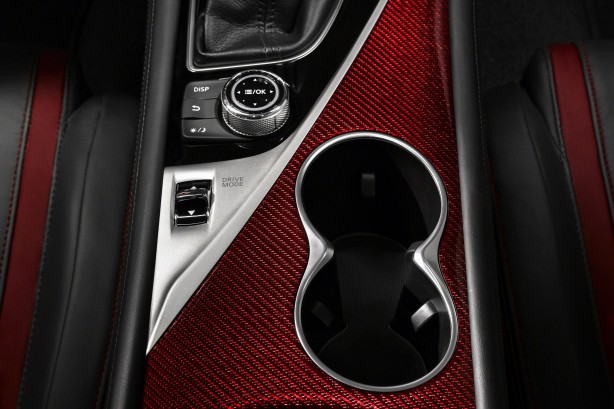 The Q50 Eau Rouge visibly hunkers down with new wider front and rear fenders, which extend the standard Q50 body by 20mm. At the back, a larger deck lid spoiler creates air-pressure downforce. All of this dynamic width is wrapped in a tailored coat of customized red paint.

Framing the paintwork across the Q50 Eau Rouge’s athletic physique is dark-chrome detailing to replace the chrome bright work of the production Q50, darkening the concept’s demeanor dramatically.

The Q50’s signature double-arch front grille too takes the dark-chrome’s matte finish, as do the glasshouse surrounds, door handles and deck lid accents. The curving hood is double air-vented as a further suggestion of the Q50 Eau Rouge performance credentials.

“From our shared passion for performance with Infiniti Red Bull Racing grew a collective desire to produce an ambitious and powerful Infiniti Q50 design study.  The overall design creates a feeling of refined muscularity,”

“The design has a number of distinctive Formula-One inspired touches. In particular, the sculpted front wing assembly and the rear aerodynamic packaging take their cues from the RB9 race car. The rear fog light packaging is unmistakably Formula One.

“The Q50 Eau Rouge is a combination of the seductive lines of the Q50 but with a fiercer design urge in keeping with a high-performance vehicle. The Q50 Eau Rouge is Infiniti to the power of four; like a bull with its shoulder muscles flexed, a bull in Infiniti clothing.”

Further underlining the sporty character of the design study, the interior was designed to offer a balance between command and comfort. Precision control is afforded by a high-grip sports steering wheel and Formula One-style paddle-shifters.

Red-infused carbon fiber detailing to the doors and center console complement the exterior style, and dark-chrome again replaces silver-chrome in the red cockpit.

Designed as a concept study, the Q50 Eau Rouge explores various possibilities Infiniti could harvest if it was to build a performance version of the Q50 sports sedan.

“Performance is a key ingredient of Infiniti vehicles such as the Q50 sports sedan. Our involvement in Formula One provides inspiration and excellence to our designers and engineers. Q50 Eau Rouge provides not only a glimpse of the design language, but also the performance capability of a future special series,” – de Nysschen added. 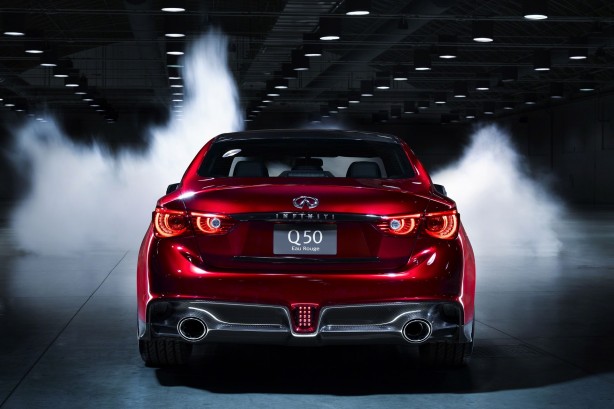 The standard Q50 is destined for Australian shores in February, priced from $51,900 plus on-roads. It will be comprised of two variants – the Infiniti Q50 2.2d and the Q50 Hybrid.

Both models are equipped with a seven-speed automatic transmission with manual mode sending drive to the rear wheels. The Q50 Hybrid is also available in all-wheel drive as an option.

The Q50 also boasts a world first Direct Adaptive Steering (DAS) that uses ‘steer-by-wire’ technology. It provides the driver with the ability to customise the Q50’s steering response and rate to suit personal preferences and the type of driving undertaken. The system has been fine-tuned by four-time Formula One World Champion, Sebastian Vettel.

Should Infiniti build the Q50 Eau Rouge? We hope so.