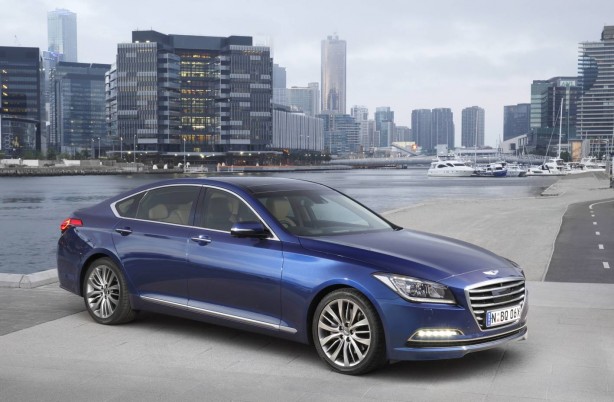 The premium car segment has a new contender, with Hyundai launching its most sophisticated and technologically advanced car yet – the Genesis sedan.

It is the Korean giant’s answer to the German triumvirate, as well as its Asian counterparts and is set to take the ambitious brand to new heights.

Unlike its home market as well as overseas markets, the Genesis will wear the Hyundai badge in Australia, instead of the winged Genesis badge. The handsome rear-drive luxury sedan has also received local tuning in its ride and handling to better suit Aussie driving tastes.

Australia also gets a sole 3.8-litre direct-injected V6 petrol model, priced from $60,000 plus on-road costs. The V8, as well as smaller 3.3-litre V6, are not available locally at this stage. As can be expected from Hyundai, the model is comprehensively equipped, and can be further augmented via the Genesis Sensory and Genesis Ultimate option packs. 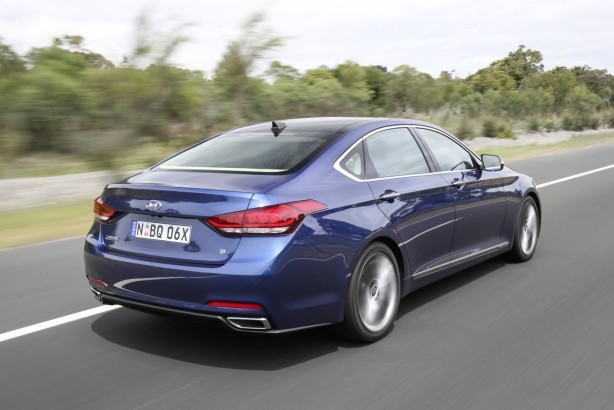 Common to Genesis is an impressive array of standard safety, technology, comfort and convenience features. They are:

This can be further enhanced with the $11,000 Ultimate pack that brings: 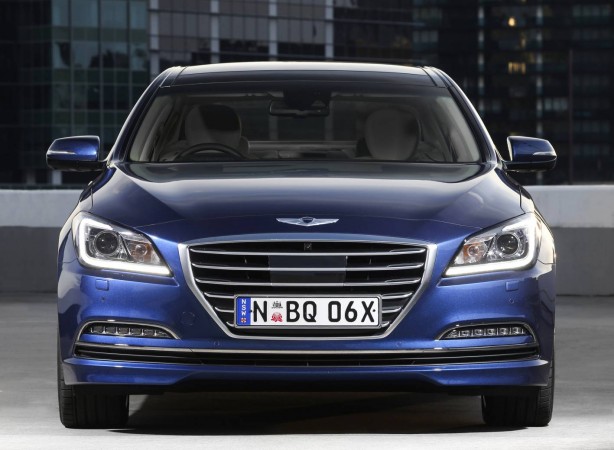 According to its maker, in terms of cabin space and luxury, the Genesis matches or exceeds the prestige and luxury car establishment against which it was benchmarked. They are also quick to point out that the second-generation Genesis (code named DH) has already collected a long list of international design, quality and technology awards, including the prestigious Red Dot Product Design and iF (International Forum Design GmbH) awards.

“While we had an exceptionally good platform to work with and a great base to build upon, we were up against extremely tough benchmarks in BMW, Mercedes-Benz, Audi, Lexus and Jaguar,” Tuitahi says. “Add the locally developed Holden and Ford prestige models into the mix, along with the Chrysler 300, and that’s a spread of very capable sedans.” 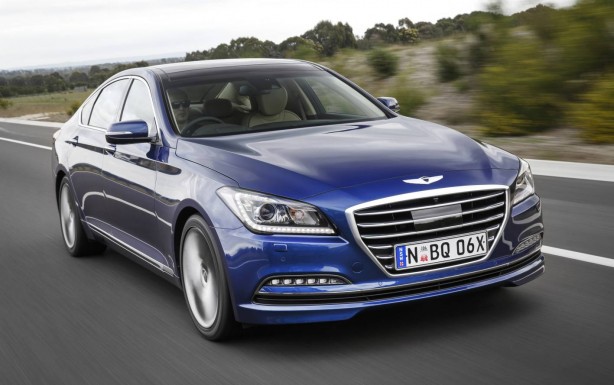 Fine-tuning the Genesis for Australian roads – and, significantly, the expectations of Australian drivers – meant rigorous on-road testing and extensive computer modelling by the HMCA team responsible for, among others, the Australia-only SR models, Veloster Turbo, Elantra Series II and ix35 Series II.

“The car was perfect for its main target markets: the US, Europe and, of course, the Korean domestic market. It’s perfect for their tastes, it performs well for their roads, and its owners will be very happy with it. In fact, I can confidently say they will be hugely impressed by it.”

“But Australian road surfaces remain some of the world’s most challenging, and I think that as a whole we enjoy driving in a different way to drivers in other countries.”

“Australian drivers expect their car to handle in a certain way,” says Tuitahi. “There’s a higher expectation of cars here – they need to be able to handle and ride really well and remain composed on our roads. So what we were looking for was a uniquely Australian-focused combination of those qualities.”

“Every tune is about finding the best compromise for that particular vehicle, relative to usage, customer preference and road condition,” Tuitahi says.

“I’m confident that in our tuning work on Genesis we achieved those objectives.”

“Genesis took nearly four years in development. Throughout, we always kept the basics in mind…the balanced stance, the proportions, a lower overall height, a shorter overall overhang at the front and the rear, having a great sporty profile, and having a great sculptural design, as well as a great surface contrast,” says Casey Hyun, Creative Design Manager at Hyundai Design Centre.

A width of 1890mm is 30mm wider than a 5 Series and very similar to a Commodore – only 8mm narrower. 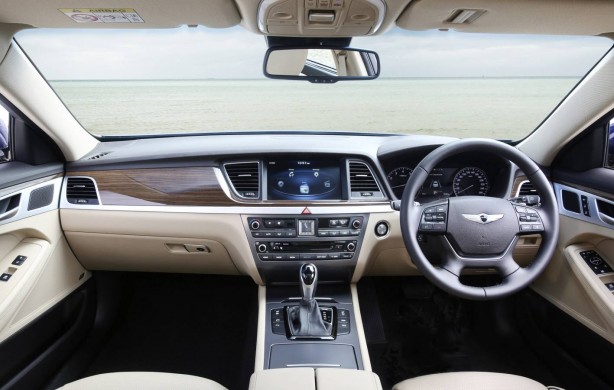 Modern Premium values have been incorporated in both the look – and feel – of the interior. Materials were chosen on the basis of their aesthetic and tactile appeal. Switchgear was minimised, with careful attention placed on Human Machine Interface (HMI) design principles and tactility.

HMI principles also were applied to the control of the new Genesis sedan’s Smart Climate Control system and Audio/Video/Navigation (AVN) system. Easy and intuitive access to both systems is via an impressive new 9.2-inch high-definition LCD touchscreen.

The widespread use of soft-touch materials, together with wood-effect trim surrounds and real aluminium details, add further sophistication and emotional appeal to the interior. 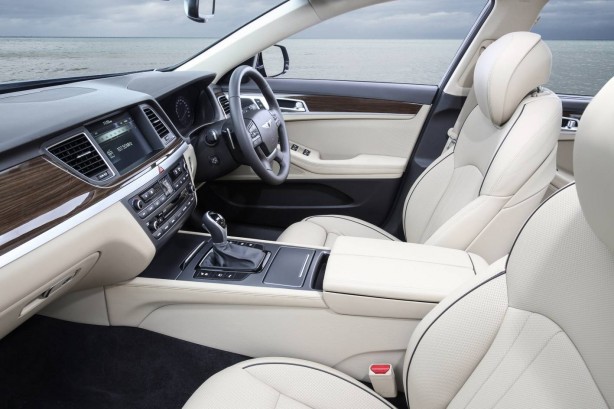 The system makes getting to your destination easier by incorporating HERE maps, SUNA live traffic updates, and a comprehensive Point of Interest (POI) database. Also included is HERE MapCare, where up to 3 years’ free mapping updates are provided when the vehicle is serviced at a participating authorised Hyundai Dealer.

The 9.2-inch touchscreen also acts as a display for the Genesis’ around view monitor, providing a 360-degree bird’s-eye-view.
The GrammyTM award-winning Lexicon sound system utilises 17 speakers to optimise acoustic characteristics within the car by using an algorithm specially programmed to the car’s interior contours and trim materials. 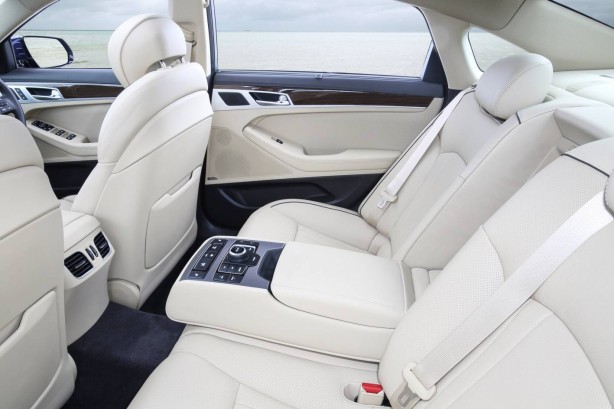 Thorough attention to in-cabin NVH led to extensive sound-deadening measures. Apart from the addition of more sound-deadening materials – for a total of 38kg – Genesis uses an additional engine bay bulkhead and a low-noise, high-pressure fuel pump.

Further NVH gains came from new Genesis’ incredibly stiff bodyshell. Also in the name of improved NVH, engine support brackets were moved further apart, while transmission and subframe mounts were stiffened by up to 100 percent over the first-generation Genesis.

Idle noise (including vibrations), acceleration noise, road and wind noise, and audible booming throughout the bodyshell were all thoroughly researched and addressed. Rather than block out all noise inside the cabin, Hyundai’s engineers worked hard to enhance agreeable sounds. Under acceleration, for example, dynamic engine sound improvements were achieved through intake and exhaust system tuning. No artificial sound generation techniques are used.

To improve Genesis’ NVH performance at cruising speeds, Hyundai’s engineers increased the stiffness of parts associated with the subframes and suspension, lowering levels of cavity and rumble noise. To ensure the Genesis recorded lower interior noise in crosswinds, internal door beams were thickened, the panoramic sunroof reshaped and its sealing process optimised. 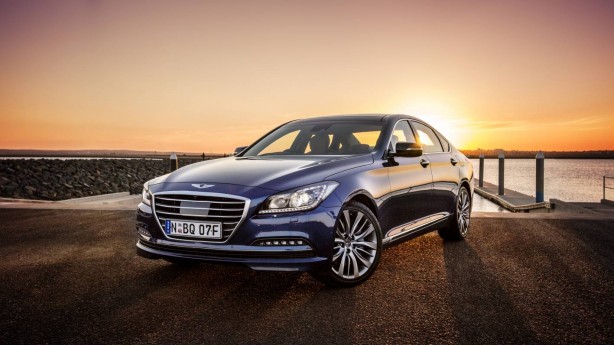 Proximity sensors recognise the Genesis sedan’s Smart Key, automatically extending the side mirrors on approach. At night, the parking lights and door handles are illuminated and side mirrors extended, which then project the word ‘Genesis’ in puddle lamps on either side of the car.

The Smart Key also operates the new hands-free Smart Boot function, which automatically opens the Genesis sedan’s boot without the need for a kick sensor under the rear bumper. The Smart Trunk function detects the Smart Key and is activated when the driver stands next to the boot for three seconds. The system uses a bumper-mounted antenna and offers an audible warning as well as hazard light flashes prior to opening.

Inside, the Genesis also uses world-first CO2 sensor technology. Hyundai engineers discovered that occupants become drowsy when CO2 levels in the vehicle reach more than 2000 parts per million. The new ventilation system prevents this from happening by adjusting and balancing the intake of fresh and recirculated air to keep CO2 levels below that level.

The new Heads-Up Display (HUD) differs from other such systems by projecting a virtual image onto the windscreen. The system offers brightness adjustment for optimum visibility day and night. Information such as current speed, Smart Cruise Control (SCC) status, Blind-Spot Detection (BSD) and Lane Departure Warning System (LDWS) data is projected ahead of the driver.

New Genesis was awarded the coveted IIHS highest honour as a 2014 Top Safety Pick+. The ‘+’ symbol indicates an extra level of achievement thanks to the car’s safety technologies, which include Autonomous Emergency Braking (AEB). In Australia Genesis already has received a maximum five-star ANCAP (Australasian New Car Assessment Program) rating. Its overall score of 36.88 points out of a possible 37 is the highest yet achieved in ANCAP’s 21-year history of crash testing.

Initial suspension tuning in the United States included input from UK-based Lotus Engineering. Lotus recommended changes to the car’s rear subframe, and after testing both this subframe and the domestic market equivalent, Australian engineers have specified the Lotus part.

Tyre-pressure monitoring is standard across the Genesis range.

Genesis is packed with advanced active safety technologies, many of which appear in a Hyundai for the first time. These technologies include:

Genesis also addresses pedestrian safety. Its new Active Hood System uses optical fibre sensors in the front bumper to detect an impact with a pedestrian. In the event of such an impact, the sensors send a signal to an actuator which lifts the bonnet to ‘cushion’ the blow and minimise injuries.

The Genesis comes with an exclusive Hyundai iCare Inclusive Service Plan, with complimentary servicing for the first five years, or 75,000km, of ownership.

The Genesis iCare Program’s complimentary servicing incorporates all scheduled maintenance items including labour, parts, lubricants and sundries such as oil and workshop supplies.

Like all Hyundais, the Genesis is supported by Hyundai’s 12-month complimentary Roadside Assist Program. Through Hyundai iCare Service Centres, the program can be extended to 10 years.