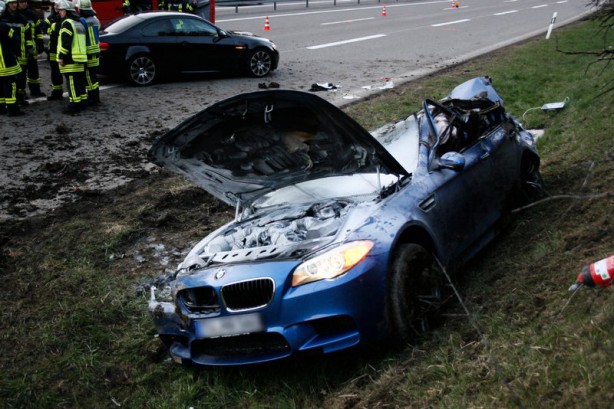 If the driver of a 560 horsepower BMW M5 loses control at over 300 km/h on an unrestricted section of the German Autobahn, this is what’s left.

According to various sources, the BMW M5 was travelling at top speed (305 km/h) when the driver braked and swerved to avoid a car which was merging into the highway, causing the driver to lose control of the BMW M5. The car skidded and struck the center divider at very high speed, went airbourne and shot across the highway, where it flipped several times before coming to a halt on the grass at the side of the A81.

Miraculously, the 60 year old driver, 20 year old passenger and a dog survived the horrific crash in a serious but stable condition. The BMW M5 on the other hand turned into nothing but a pile of junk metal. Every single airbag in the M5 were deployed during the crash. The crumble zones of the M5 did their job of absorbing most of the impact, leaving the passenger compartment damaged but un-squashed.

A BMW M3 and a BMW M6, both driven by the sons of M5 driver were travelling behind the M5 when the accident occur. Immediately after the crash they stopped and rushed to the aid of their father.  Using a fire extinguisher from the M6 they put out a fire in the engine compartment of the M5, preventing the fire from burning down the entire car and its occupants. 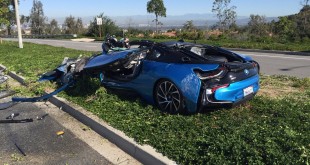 BMW i8 destroyed in freak crash