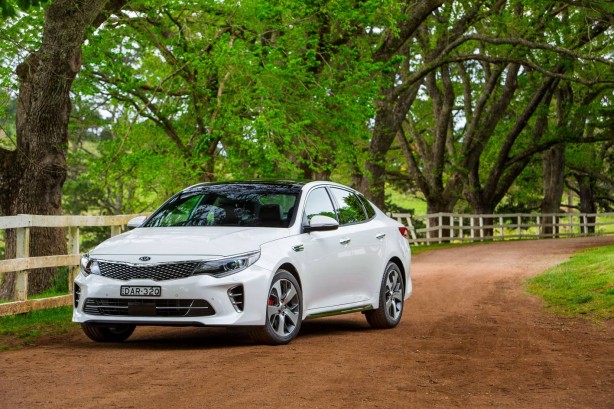 Kia’s fourth-generation Optima midsize sedan has been officially unveiled, with the company targeting 3,000 sales a year in the highly competitive segment that includes the Mazda6 and Ford Mondeo.

The latest iteration Optima looks more like a major facelift over the previous model, though Kia claims the makeover is all-new. Further tweaks to the 2011’s model striking design see the new Optima offering more road presence than ever, with its contemporary surface detailing, sharp body lines and creases, and a more elongated sedan silhouette.

Penned by Peter Schreyer, former design chief at Audi and now President and Chief Design Officer of Kia Motors, the evolutionary new look was designed to be functional and sporty, with exterior dimensions that are marginally longer, taller and wider. 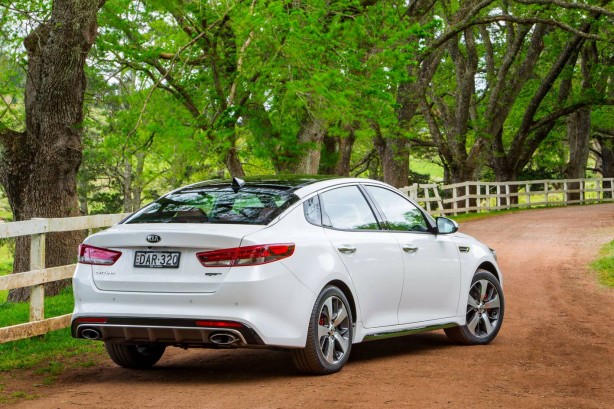 The new Optima integrates the brand’s hallmark ‘tiger-nose’ grille with the longer, wider, wrap-around headlamps, pulled taut over the blistered wheel arches. The bumper swells into bold right angles around the front fog lamps, adding greater volume to the lower part of the ‘face’ and giving the car a more stable, wider look.

In profile, the glass area maintains the raked A-pillar and sweeping C-pillar that define the Optima’s sporty appearance, with the rear quarter light kicking up as the shoulder line extends towards the raised boot lid.

Upper spec GT variants feature LED taillights, with the athletic appearance of the car boosted by a rising, spoiler-shaped boot lid and an expansive rear bumper which houses an air diffuser (GT model only) and oval exhaust.

Inside, the 2016 Kia Optima boasts a more luxurious, driver-focused interior than ever before, with the new cabin crafted with an “obsessive attention to detail”, and represents the biggest step forward for the new model.

Kia’s design team focused on delivering a thoroughly modern interior look and feel, with the cabin offering a cleaner, more unified design than the previous generation. The dashboard is spread along a more horizontal plane and a wider central console, creating a greater sense of spaciousness.

The material quality of the Optima’s cabin is said to have significantly improved over the outgoing model, with a far higher proportion of soft-touch materials, as well as cloth and leather appointed in natural tones. 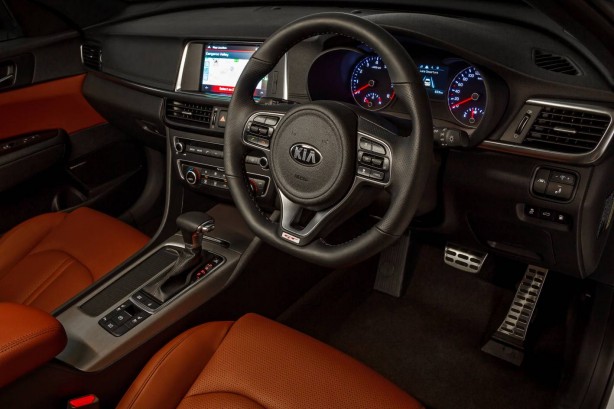 With a 10mm longer wheelbase and reshaped seats, rear passengers now enjoy 25 mm more legroom, while the wider body yields more shoulder room for all passengers (20 mm and 17 mm extra in front and rear). The longer, higher roof also results in greater headroom throughout the cabin (+5 mm and +15 mm front and rear).

Other areas of improvement include lower NVH levels thanks to a larger under-floor cover and more effective windshield seals. Larger cross-member bushings, front and rear, also isolate road noise, while reducing the level of vibration through the floor and steering wheel. 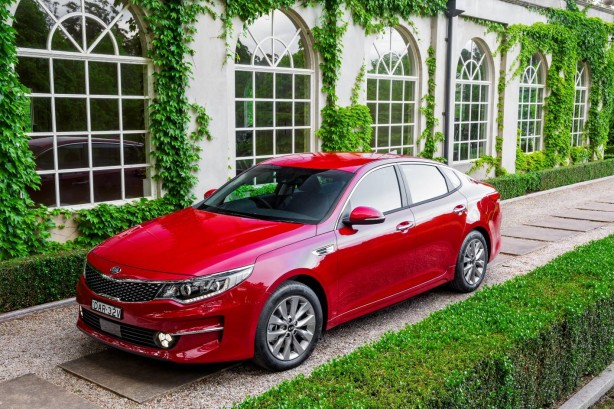 For Australia the all-new Optima will come standard with the latest audio-visual navigation system with a 7-inch (Si) or 8-inch (GT) touchscreen infotainment and satellite navigation system, with rear parking camera and Bluetooth hands-free capability.

The touchscreen infotainment system is paired with a six-speaker audio system as standard for the Si while GT buyers will benefit from a powerful 590 watt Harman Kardon Premium Sound system with 10 speakers and amplifier.

In a first for any car in the medium segment, the all-new Optima will be available with a wireless charger for mobile devices.

The 2016 Kia Optima will launch in Australia with two specifications – a 2.4-litre naturally aspirated 4-cylinder producing 138kW and 241Nm in the Si and the new all-aluminium T-GDI 2.0-litre turbocharged four-cylinder GT model.

Boasting 180kW and 350Nm, the GT features twin-scroll turbocharger, dual continuously variable valve timing technology and laser-drilled injectors for the best possible balance between engine performance and efficiency. Both engines will drive the front wheels through a six-speed automatic transmission.