Maserati GranTurismo to get the Liberty Walk treatment 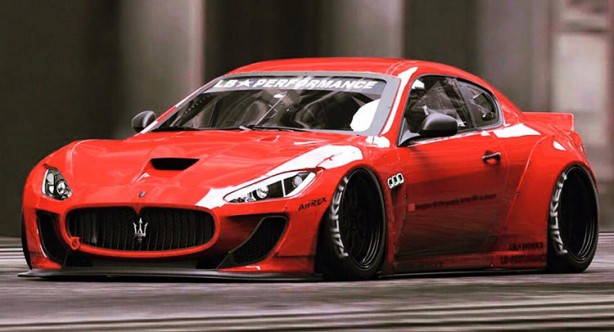 The Ferrari 458 Italia, the Lamborghini Gallardo, the Nissan R35 GTR; all high-end exotics radicalized by the legendary Liberty Walk. Now it’s finally Maserati’s turn to get the wide-body treatment with the GranTurismo being their latest project. Liberty Walk intends to transform this Pininfarina inspired supercar into an aggressive track beast.

The GranTurismo has been given the usual Liberty Walk signature accessories such as the widened flares, Rocket Bunny style spoiler, front splitter and diffuser. The low stance is a standard feature on all Liberty Walk cars, there’s a good chance it’s on some form of air ride suspension. The bolt on over-fenders integrate well with the design. The front fenders especially have retained the iconic 3 side vents normally found on the GranTurismo.

The design appears to be in the development stage with only renders released so far although there’s a great chance this design will be very similar to release. Pricing hasn’t been released however based on the price of their other kits there’s a high chance it will cost in excess of $20,000 USD.

Maserati’s flagship, the Quattroporte has been further enhanced for 2018 with more performance and technology. …