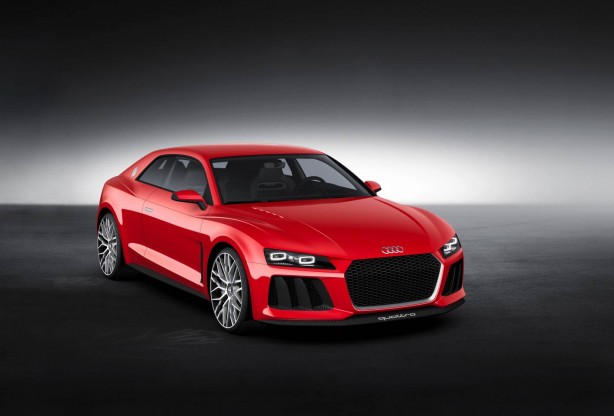 Audi will be introducing an updated version of the Audi Sport Quattro concept at the Consumer Electronics Show in Las Vegas, called the Sport Quattro laserlight concept.

This is the third iteration of the car. As the name implies, the highlight of the car is its matrix LED headlights with laser light technology.

Two low-profile trapezoidal elements are visible within the headlights – the outer one generates the low beam light using matrix LEDs and an aperture mask, while the inner element produces laser light for high-beam functionality. 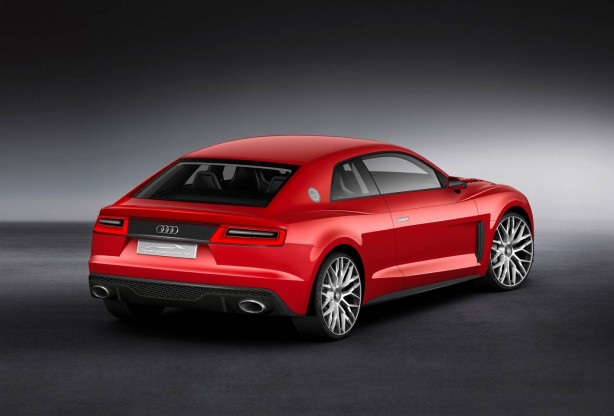 The powerful laser diodes are significantly smaller than LED diodes and is capable of illuminating the road for a distance of nearly 500 metres and is has three times the luminosity of LED high beam lights. Audi will be using this lighting technology on the race track in the 2014 R18 e-tron Quattro.

Painted in Plasma Red, the concept measures 4,602mm long, 1,964mm wide, 1,386mm tall and has a wheelbase of 2,784mm. The angular, swept-back C pillars of the Audi Sport Quattro laserlight concept and the pumped guards are reminiscent of the classic Sport Quattro. 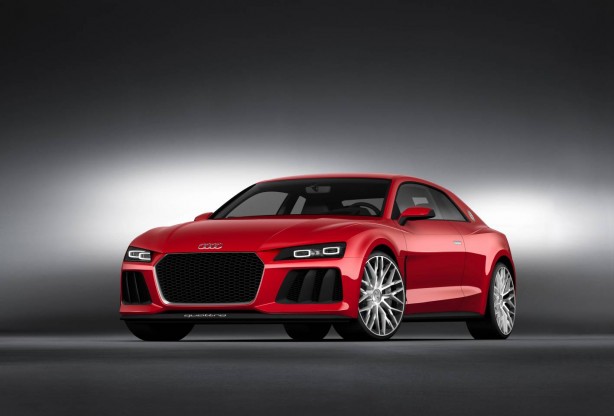 The car’s hexagonal single-frame grille also offers an outlook on future design of the sporty production models. The lower section is nearly vertical, while the upper follows the contour of the bonnet; the screen insert is a typical solution from car racing. The low grille emphasises the show car’s width.

Two large, vertical blades divide each of the large air inlets; their form is repeated in the creases of the bonnet. The splitter, which is made of carbon fibre reinforced polymer (CFRP), is shifted far to the front, as on a racecar. The luggage space, which is reinforced by a large cross bar strut, offers 300 litres of cargo capacity. 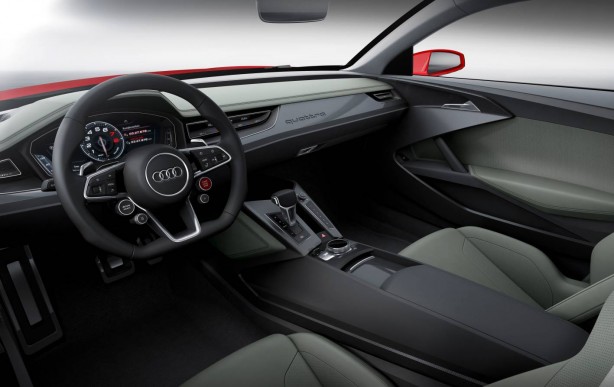 Inside, the slender instrument panel is reminiscent of the wing of a sailplane. The supporting structure of the interior is a carbon shell that also serves as a storage compartment in the doors.

A line of trim beneath the windshield wraps around the driver and front passenger and integrates functions such as the inside door handles. The folding race car shell seats with their high lateral supports and integrated head restraints, together with the two rear seats, provide space for four persons. The climate controls are integrated in the air nozzles; a single element is used to control the intensity, temperature and volume of the air stream. In addition to showing climate control settings, the slim display in the centre of the dashboard also shows media data. 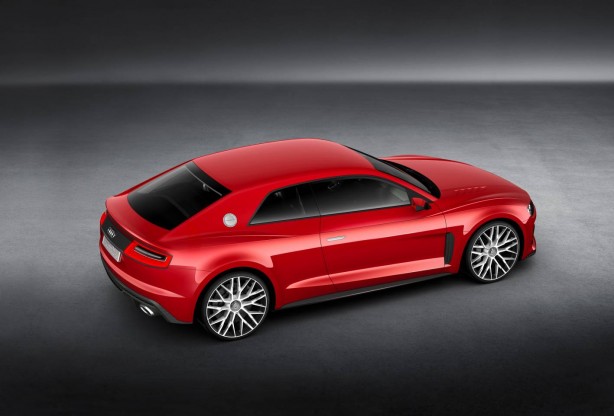 Like the original concept, the Sport quattro laserlight concept has a plug-in hybrid powertrain that is consist of a twin-turbo 4.0-litre V8 engine and a disc-shaped electric motor. The setup enables the car to produce a combined maximum output of 515kW (700 HP) and 800 Nm of torque.