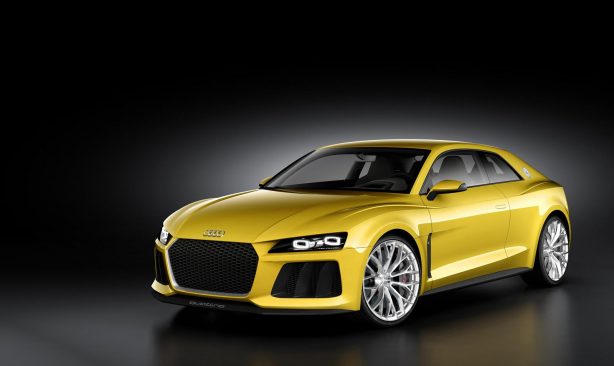 Audi has unveiled its latest interpretation of the Audi Sport Quattro concept. Introduced in 1983, the legendary classic was designed as a homologation model for the World Rally Championship. With 225kW (306hp) and many technical innovations, it was the supercar of its day.

The latest Sport Quattro concept show car continues the grand quattro tradition, with a stunning coupé design and plug-in hybrid drive consisting of a 4.0-litre twin-turbo V8 TFSI engine generating 412kW (560hp) and 700Nm and an electric motor with 110kW (150hp) and 400Nm. Combined system output is 515kW (700hp) and 800Nm, with energy supplied from a liquid-cooled lithium-ion battery mounted at the back, which has a capacity of 14.1 kWh. It sits on a 2,784mm wheelbase, and is 1,964mm wide and unusually low-slung at 1,386mm. 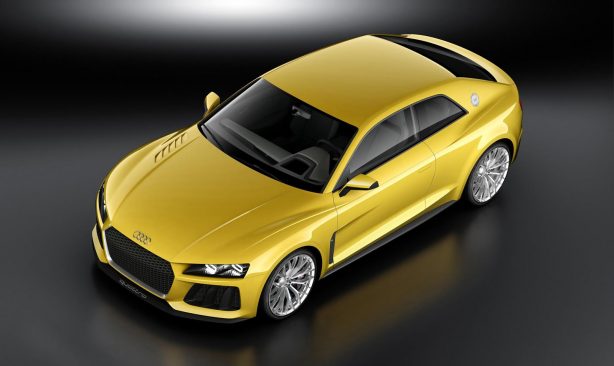 Thanks to the powerful drivetrain, the Audi Sport Quattro concept will storm to triple digits from a standstill in a mere 3.7 seconds, before hitting a top end of 305km/h. It can travel on electric power for up to 50km and has an average fuel consumption of 2.5L/100km, with CO2 emission of 59g/km, partly thanks to the engine’s cylinder on demand (COD) and start-stop systems.

Like the Audi Sport quattro, the Audi Sport quattro concept was designed in the spirit of racing. Each design solutions are driven by a technical function and several are homage to the quattro models of the early 1980s. These include the angular, flat C-pillars and the rectangular double headlights featuring Audi’s ground-breaking Matrix LED technology. 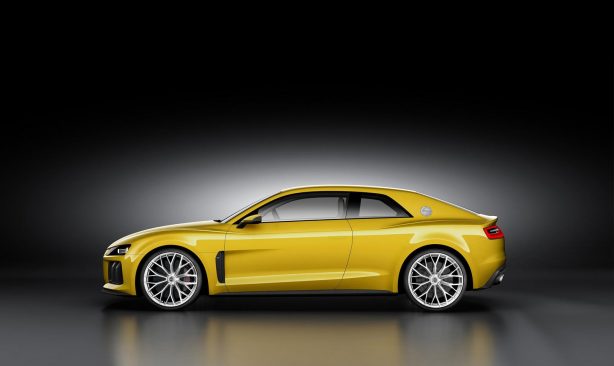 Another design homage are the “blisters” above the fenders. The Audi designers have reinterpreted and accentuated these lines. Throughout the car, sharp contours frame tautly muscular surfaces. With their interplay between convex and concave curvatures, the engine bonnet, fenders and flanks define the athletic character of the concept.

The power door handles are now painted in the same colour as the body, which is dressed in bright yellow and shod with 21-inch alloy wheels wrapped in 285/30 tyres.

Inside, the minimalistic driver focused cabin gets digital instrument clusters, including the centrally-mounted rev counter flanked by the Le Mans map on the left and lap times on the right. Several other virtual 3D displays are available and can be selected from the multi-function sport steering wheel. 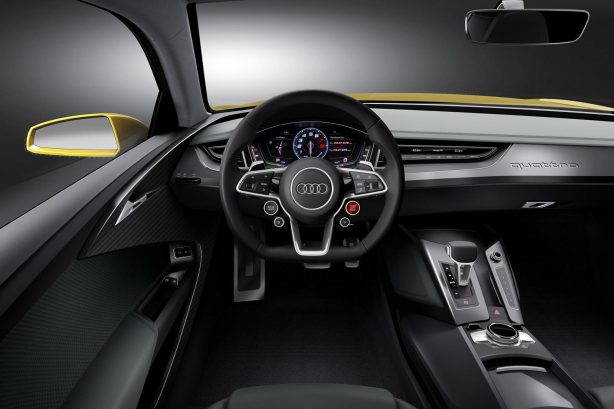 Choices include a Race mode with central speedometer, track information and a stopwatch. In Setup mode, detailed information about numerous race tracks can be displayed.

Another highlight is the innovative air conditioning control unit, which is integrated directly into the air vents. Temperature, intensity and air flow can be controlled using one and the same element. The display in the vents shows either important media information or the air conditioning settings.

The Audi Sport Quattro concept will make its public debut at next week’s Frankfurt Motor Show.