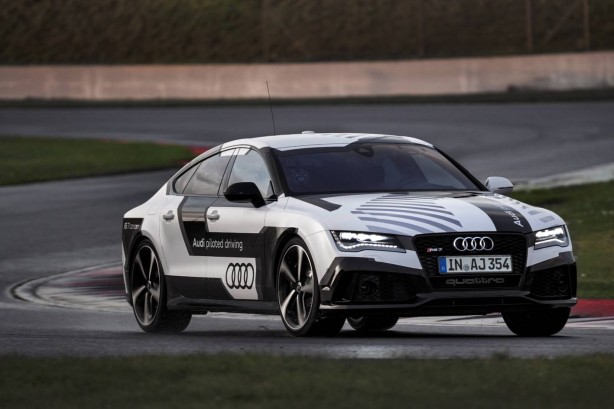 We have seen prototypes of driverless cars being “driven” on the streets, but now Audi is taking automated driving to a whole new level – completing a full Grand Prix track flat out, without a driver.

At the season finale of the German Touring Car Masters (DTM) on the weekend, Audi demonstrated its piloted driving at track level. The Audi RS 7 piloted driving concept car completed a full lap of the Hockenheim circuit – at racing speed – all on its own, driven by nothing but banks of computers, sensors and cameras with just ones and zeros running though them. Welcome to the digital age of compu-drive.

It took the Audi RS 7 piloted driving concept just over two minutes to complete a lap on the Grand Prix track in Hockenheim. Audi claims the system is able to pilot the car around the circuit with high precision and accuracy to within centimetres.

“The top performance by the Audi RS 7 today substantiates the skills of our development team with regard to piloted driving at Audi,” said Prof. Dr. Ulrich Hackenberg, Board Member for Technical Development at AUDI AG.

“The derivations from series production, particularly in terms of precision and performance, are of great value for our further development steps.” 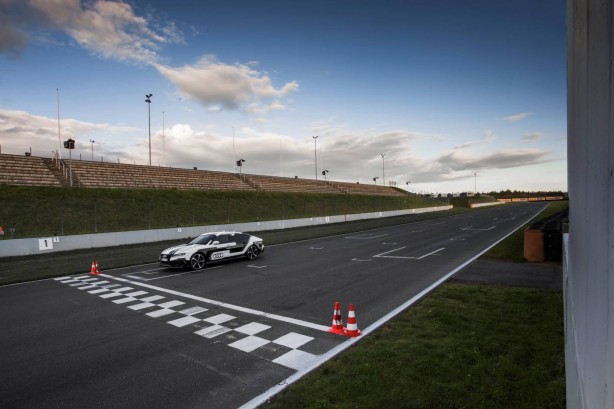 For orientation on the track, the system uses specially corrected GPS signals. This GPS data is transmitted to the vehicle via WiFi according to the automotive standard (and redundantly via high-frequency radio).

In parallel to this, 3D cameras in the car film the track, and a computer program compares the cameras’ image information against a data set stored on board. The data is then used to control the steering, brakes and accelerator, allowing the car to orient itself on the track within centimetres.

Piloted driving is one of the most important development fields at Audi and the first successful developments were achieved ten years ago. The test results continually flow into series development. The latest test runs at the physical limit are providing the Audi engineers with insights for the development of automatic avoidance functions in critical driving situations.

Experts from Volkswagen Group Research, the Electronics Research Laboratory (ERL) and Stanford University (both in California) are supporting Audi as partners in the further development of piloted systems.

The Audi RS 7 Sportback packs a crushing 4.0-litre TFSI twin-turbo V8 under the bonnet sending 412kW of power and 700Nm of torque to all four wheels through Audi’s quattro all-wheel drive system. The RS 7 boasts performance in the realm of elite supercars, unleashing from standstill to 100 km/h from rest in just 3.9 seconds. Top speed is electronically limited to 250 km/h, but 305 km/h is possible with the optional Dynamic Package Plus.