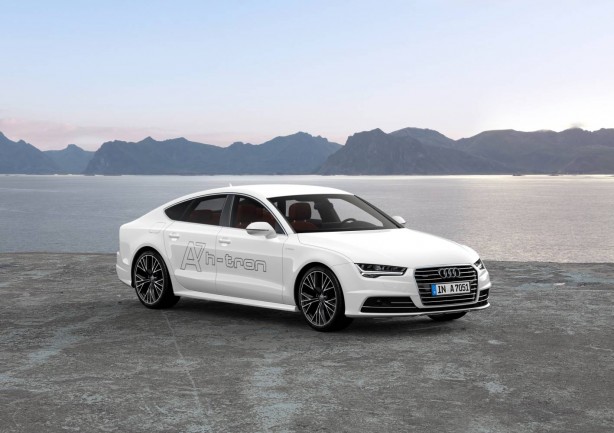 The Audi A7 Sportback h-tron quattro has been unveiled at the Los Angeles Auto Show.

The h-tron represents Audi’s entirely new direction in fuel cell technology. The system uses electric drive with a fuel cell as its energy source that operates in combination with a hybrid battery and an additional electric motor in the rear. The overall electrical system power of 170 kW is transferred to the road via all four wheels. This drivetrain configuration makes the emission-free Audi A7 Sportback a true quattro, and a new direction for fuel cell cars.

Looking just like a standard A7, the crucial differences are beneath the bonnet: the fuel cell in the h-tron is installed at the front, mirroring the conventional A7 Sportback with combustion engine. Because the exhaust system only has to handle water vapour, it is made of weight-saving plastic.

The fuel cell itself comprises over 300 individual cells that together form a stack. The core of each of these individual cells is a polymer membrane. There is a platinum-based catalyst on both sides of the membrane.

Hydrogen is supplied to the anode, where it is broken down into protons and electrons. The protons migrate through the membrane to the cathode, where they react with the oxygen present in air to form water vapour. Meanwhile, outside the stack the electrons supply the electrical power – depending on load point, the individual cell voltage is 0.6 to 0.8 volts. 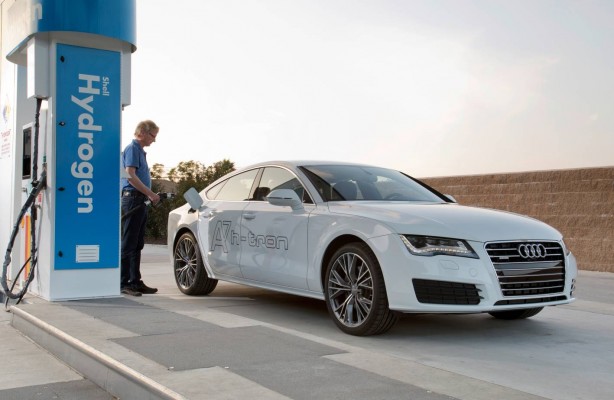 The entire fuel cell operates in the voltage range of 230 to 360 volts. The main auxiliary assemblies include a turbocharger that forces the air into the cells, the so-called recirculation fan – it returns unused hydrogen to the anode, thus increasing efficiency, and a coolant pump. These components have a high-voltage electric drive and are powered by the fuel cell. There is a separate cooling circuit for the essential cooling of the fuel cell. A heat exchanger and a thermoelectric, self-regulating auxiliary heating element maintain comfortable cabin temperatures.

The fuel cell, which operates across a temperature range of 80 degrees Celsius, places higher demands on the vehicle cooling than an equivalent combustion engine but achieves superior efficiency of as high as 60 percent – almost double that of a conventional combustion engine. Its cold-starting performance is guaranteed down to -28 degrees Celsius.

A special feature of the A7 Sportback h-tron quattro is its plug-in hybrid concept, featuring a lithium-ion battery on board that can be recharged from the power socket by lead.

The battery can store energy recovered from brake applications and supply considerable power for full-load boosting, paving the way for impressive acceleration. Both the front and rear axles have no mechanical connections for the transmission of power. In the event of slip, the torque for both driven axles can be controlled electronically and adjusted continuously. 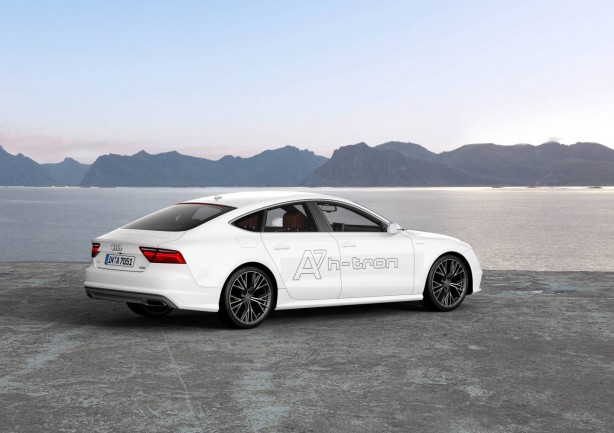 On battery power, the Audi A7 Sportback h-tron quattro has a range of up to 50 kilometres. The battery in the rear of the plug-in hybrid can be recharged by lead. Depending on the voltage and current rating, a full recharge takes between two hours (industrial power socket/360 volts) and four hours (domestic power socket at 230 volts).

The power electronics convert the energy stored in the fuel cell and battery into electricity for the electric motors to drive the front and rear axles separately.

The two electric motors have an output of 85 kW each, or 114 kW if the voltage is temporarily raised. The peak torque is 270 Nm per electric motor.

With 540 Nm of propulsive power at its disposal the Audi A7 Sportback h-tron quattro, which tips the scales at a hefty 1,950 kg, races from a standstill to 100 km/h in 7.9 seconds, before maxing out at 180 km/h

A power meter – in the place of the revolution counter in the instrument cluster – informs the driver of the momentary power flow. The outer sections show the fuel level in the hydrogen tank and the level of battery charge. Graphics on the MMI monitor visualize the energy flow. When the driver presses the EV button, the A7 h-tron drives solely on battery power.

Audi says the h-tron concept car is a showcase of the company’s in-depth intimacy with fuel cell technology. The brand claims it is in a position to launch the production process as soon as the market and infrastructure are ready.