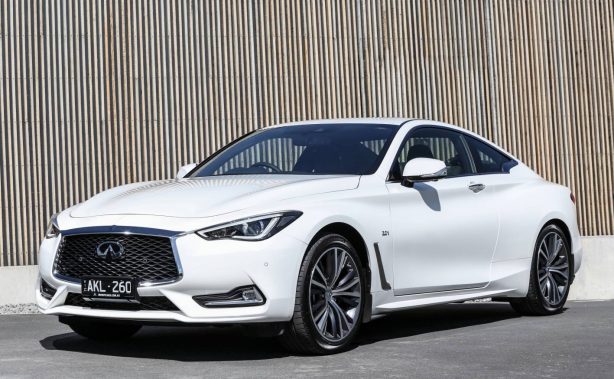 The all-new 2017 Infiniti Q60 has launched in Australia, reigniting its presence in the increasingly tight premium sports coupe segment.

The new Q60’s Australian market introduction commences with the Q60 GT and GT with Enhancement Pack priced from $62,900 and $65,900 respectively. Both models are powered by a 2.0-litre turbocharged four-cylinder engine producing 155kW and 350Nm, with fuel economy rated at 7.7L/100km.

All powertrains are mated to a seven-speed automatic transmission driving the rear wheels. All-wheel drive variants available in certain oversea markets will not be offered in Australia. 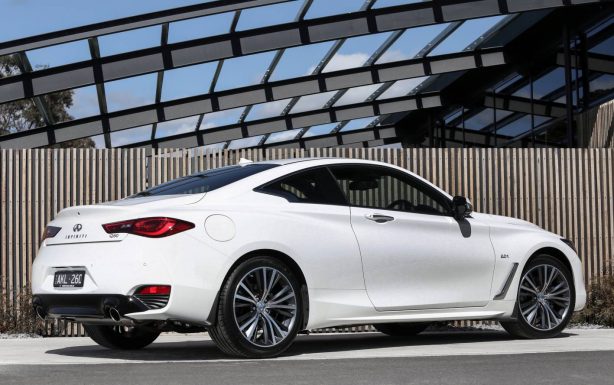 Maintaining the distinctive lines and sharp angles of the original concept, the new Infiniti Q60 presents a bold exterior elegant yet expressive proportions and taut, crisp lines. Infiniti, Nissan’s luxury arm, is set to push for a lift in its brand appeal globally with the new Q60, which will pitch against the dominant BMW 4 Series and Mercedes-Benz C-Class coupe as well as the increasingly popular Audi A5 and Lexus RC.

Infiniti’s second-generation Direct Adaptive Steering “steer-by-wire” system makes first application in the Q60 and is said to bring improved levels of steering feel and feedback. It offers drivers the option to personalise the steering’s precise responses to suit their preferences. 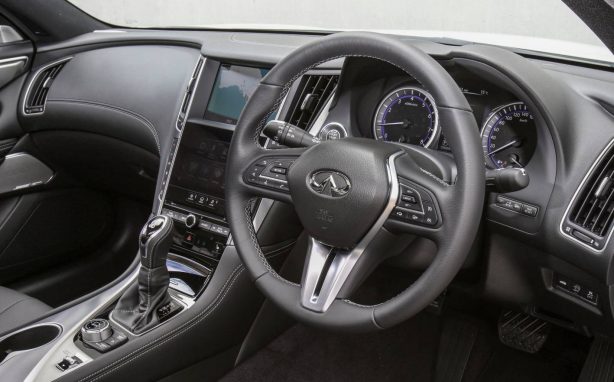 The Q60’s interior is largely based on the Q50 sedan. The base model gets aluminum trim, while a Blackwood option is also available. Sport and Premium models are available with carbon-fibre highlights, while a white leather interior package receives a silver carbon-fibre accent. Darker interior colors, including a sporty red leather trim, are matched with a black and violet carbon fiber accent. High-contrast stitching throughout the cabin increase the premium ambience and feeling of quality in the Q60’s interior.

Active Noise Cancellation is fitted to all Q60 models, effectively preventing negative engine noise frequencies from intruding on the calm of the cabin.

In terms of safety the Q60 gets Forward Emergency Braking with pedestrian braking system, Predictive Forward Collision Warning and Around View Monitor with Moving Object Detection.