Honda has taken the wraps off its new Legend sedan for the Japanese domestic market where it will go on sale on 22 January 2015.

Sporting a more upmarket sheet metal and LED-infused “Jewel-eye” headlights, the fifth-generation Legend will be badged as the Acura RLX Sport Hybrid when it arrives in the US in 2015. It is powered by Honda’s Sport Hybrid SH-AWD (Super Handling All-Wheel Drive) system that combines three electric motors – one at the front, and two at the rear – with a 3.5-litre V6 petrol engine featuring Variable Cylinder Management. Maximum combined output is rated at 281kW and 461Nm, channeled to all four wheels via a seven-speed dual clutch transmission. 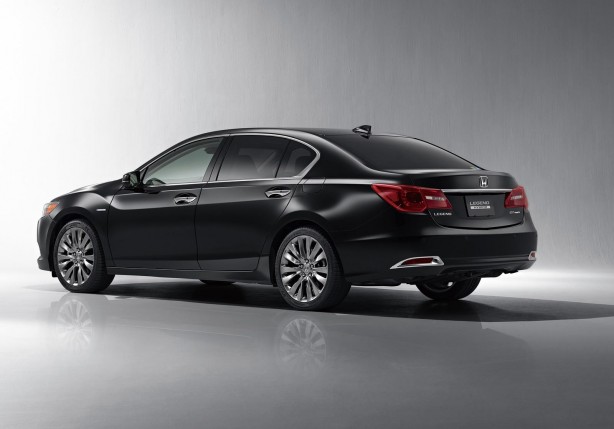 According to Honda, the Sport Hybrid SH-AWD system automatically combines FWD, RWD or AWD with EV Drive, Hybrid Drive or Engine Drive for optimal efficiency and performance, while the two rear electric motors (each with 26kW) provide a torque vectoring function and deceleration power to the rear wheels in any ratio.

Like all hybrid systems, the electric motors can act as capacitors to store energy captured during vehicle deceleration and braking and convert it to electricity to supply a 72-cell, 1.3kWh lithium-ion battery pack situated behind the rear seatback. The setup enable the large sedan to return a claimed combined fuel consumption of 6.0L/100km.

Like any self-respecting premium sedan, the Legend is brimming with technology, including the new Honda Sensing system that brings Collision Mitigation Braking, Road Departure Mitigation, Lane Keeping Assist, Adaptive Cruise Control with Low-Speed Follow and Traffic Sign Recognition among others.

The Honda Legend was last sold in Australia in 2013. It is unclear at this stage whether Honda Australia will be bringing the new model back.