2018 Audi A5 and S5 Cabriolet pricing and specification 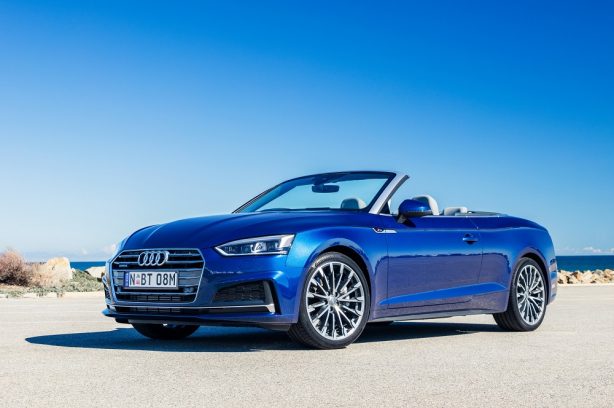 The all-new second-generation Audi A5 and S5 Cabriolet have joined the burgeoning A5 family, arriving in Australia priced from $83,400 plus on-roads.

Like its predecessor, the A5 Cabriolet features a soft top that opens in 15 seconds and closes in 18 seconds at the push of a button. It can be operated at speeds of up to 50km/h and promises to offer ‘outstanding’ level of aeroacoustics, thanks to effective insulation.

Compared to the A5 Coupe, the Cabrio gets additional struts in the body and reinforced sills to compensate for the lack of a fixed roof. Its head-thorax side airbags and rollover hoops behind the rear seats also burst into action in the event of a crash and rollover.

Audi says the new A5 Cabriolet’s torsional stiffness has increased by 40 percent compared to the outgoing model, while weight is down by up to 25kg.

“The addition of the S5 Cabriolet goes one step further, adding potent engine sound and performance, plus a visually arresting S model design, to the exceptional feeling of open-top motoring. Even as the engine starts, this vehicle comes alive, connecting the driver and road in one seamless experience of outdoor freedom.”

Audi A5 Coupe pricing and specification

Besides those structural changes, the A5 Cabriolet is largely similar to the A5 Coupe. It sports similarly chiseled bodywork dominated by a wider and flatter 3D Singleframe grille at the front, and the signature shoulder wave line down the sides.

At the back, the Cabriolet’s third brake light has been neatly integrated into the aluminium trim strip at the base of the hood.

The boot is access via an automatic tailgate that can be optionally equipped with kick-to-open gesture control and expanded through the 50/50 split rear seats.

Three drivetrain options are available in the new A5 Cabriolet. The entry-level 2.0 TFSI S tronic drives the front wheels only with 140kW and 320Nm, with the seven-speed dual-clutch transmission replacing its predecessor’s multitronic CVT. It’s capable of 0-100km/h in 7.9 seconds. Fuel consumption is improved, thanks to the dual injection, B-cycle combustion and start-stop technology, at just 5.9L/100km.

The remaining two models in the A5 line-up are both quattro models, with an all-wheel drive arrangement that employs a centre differential for front-to-rear torque split of 40:60. Up to 70 percent of the engine’s torque can be directed to the front and up to 85 percent to the rear depending on driving conditions.

Both 2.0 TFSI engines are equipped with the seven-speed S tronic dual-clutch transmission as standard.

At the top of the range, the S5 Cabriolet is 40kg lighter than its predecessor. With a 3.0-litre turbocharged V6 engine that is an all-new design from the ground up, the new engine produces 260kW (up 15kW), while peak torque of 500Nm (up 60Nm) is available from as low as 1370rpm.

Efficiency is also assured, at just 7.9 L/100km, also thanks to the same innovative B-cycle combustion method used in the 2.0 TFSI engine.

Matched to an eight-speed tiptronic automatic transmission and quattro, the all-new S5 Cabriolet accelerates from 0 to 100km/h in just 5.1sec. As an enhancement to the standard quattro driveline, it is also possible to option a sport differential on the rear axle that can apportion even more torque to the wheel with the most grip. Audi claims this effectively ‘points’ the car towards the apex of a corner.

Newly developed five-link front and rear suspensions is standard on all A5 and S5 models, and can be further complemented by the optional adaptive dampers (standard on S5) that can be adjusted for a more comfortable ride, focused dynamics and everything in between via the Audi drive select system.

Braking in the S5 Cabriolet is taken care of with 350mm ventilated front discs clamped by 6-piston calipers.

The new model sees a significant increase in standard specification across the range. In the case of the S5 Cabriolet, Audi says the total improvement in customer value is around $27,000.

The A5 Cabriolet features numerous safety features, including Autonomous Emergency Braking (AEB), along with other safety assistance features like exit warning, side assist, parking system plus with rear view camera and rear cross traffic alert.