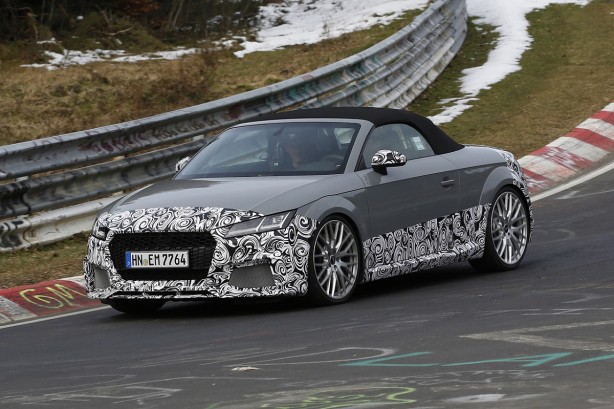 While the upcoming Audi TT RS Coupe wraps up track work and hits the public road for testing, it’s time for its roadster sibling to pound the track. Snapped at the infamous Nurburgring circuit, the next generation TT RS Roadster was partially camouflaged, concealing a more aggressive front fascia, complete with a deeper, honeycomb front grille flanked by a pair of large air intake.

The rear of the car was also under wraps, but we can expect a revised bumper with deeper diffuser and pair of oval tailpipes, which is a trademark of Audi’s RS models.

It is unclear at this stage what lurks under the TT RS’s bonnet, but there is speculation it might gain the 2.5-litre turbocharged 5-cylinder engine from the RS3 Sportback, tweaked to produce close to 300kW and 470Nm.

As expected of an RS model, drive will be through Audi’s quattro all-wheel-drive with transmission options to include a six-speed manual, as well as S tronic seven-speed dual clutch transmission. The sprint from 0 to 100km/h is expected to take just 4.1 seconds. 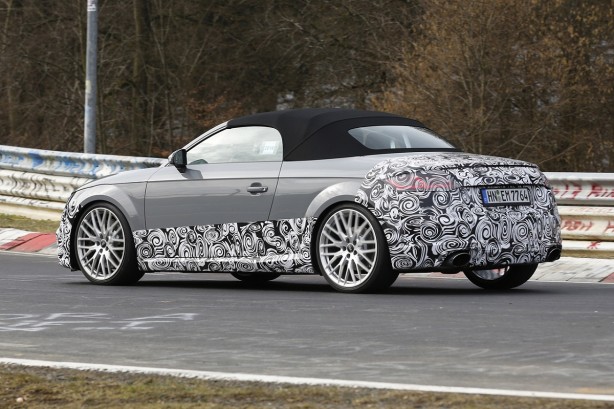