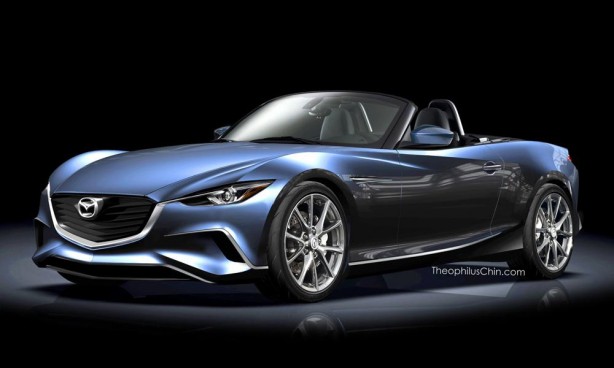 While the next-generation Mazda Mx-5 is not set to bow until early 2015, the world of computer rendering has given us yet another illustration of what the world’s most popular roadster could look like.

With the new MX-5, Mazda has decided to retrace the roadster’s roots by putting it on a strict diet. The company decreed that engineers trim 275kg from the 1075kg ‘empty’ kerb weight (the weight without a driver) of today’s MX-5 to aim for an ambitious target of 800kg.

Every component would come under the spot light, from nuts and bolts to the car’s body structure. Non essential features would also be deleted to bring the car back to basics. There is speculation that the glovebox will likely disappear, in favour of other storage compartments. In keeping with 21st century technology, the owner’s manual will probably come in the form of a USB stick. And lightweight neodymium-magnet stereo speakers will replace heavy, ceramic-magnet-based conventional units.

A lighter car will also lead to lighter transmission, smaller brakes and less cumbersome suspensions and so on. The MX-5’s engine will also be replaced with a smaller displacement direct-injection four-cylinder turbocharged engine of around 1.5-litres. It will feature variable cam phasing, lighter, low-friction reciprocating parts and will likely incorporate a new exhaust manifold design that achieves more effective exhaust gas evacuation.

Many of these developments will come under Mazda’s new SkyActiv range of light and efficient engines.

A lighter transmission is also the order of the day as the Japanese company tries to make the manual shift action as mechanically precise as the original from 1989. For those who prefer a self-shifter, a highly efficient paddle-shift torque-converter auto, with a lock-up clutch, is also likely.

The dimensions of the new car will be slightly more compact than today’s design, with a narrower width to reduce the frontal area. Its design will be inspired by Mazda’s new Kodo design language but will also remain faithful to its forebears.

Previous BMW and Lexus to develop new flagship supercar?
Next Maserati Quattroporte burnt to the ground in Azerbaijan