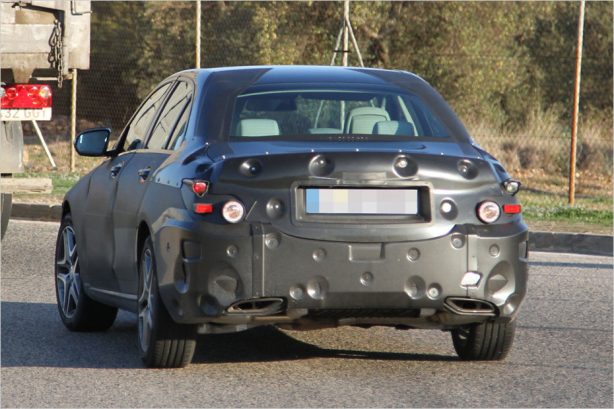 With the new BMW 3-Series raising the bar in the premium compact executive segment, Mercedes is also gearing up with the next generation C-Class, due to be released in 2014.

The new model of the world’s most popular Mercedes was recently spotted conducting testing at an unknown location in Germany.

The heavily camouflaged exterior only gives out slight hints about the design of the 2014 C-Class. Most visible in the spy pics is the new almond-shaped headlights. At the rear, the lights are noticeably larger and resemble those on the new Mercedes CLA. The rest of the new C-Class body shape follows the elegant and simplistic design language of its predecessor.

As with most new iteration of cars these days, the new C-Class will be more powerful and fuel efficient. It will feature Mercedes’s new family of four-cylinder petrol engine with a lean combustion system, turbocharging and spray-guided direct injection. The engines’ power output ranges from 184 hp (137 kW) to 211 hp (157 kW). A new plug-in hybrid version is also in the cards.

Several high-tech gadgets from the S and E-Class collection will make thier way down to the new C-Class. These include, among other things, a proximity control system that governs semi-autonomous driving in bumper to bumper traffic and brake assist with cross over wizard to detect cross traffic and pedestrians.