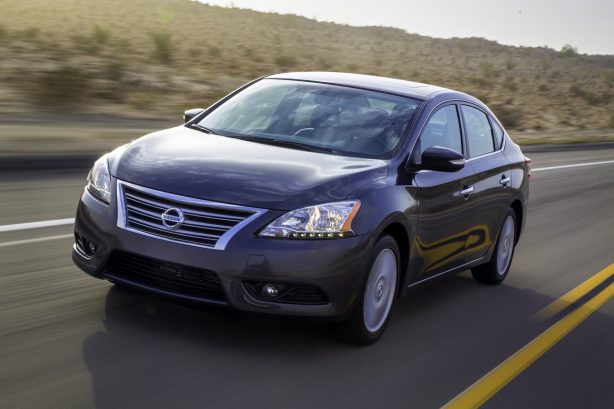 Nissan has officially revealed the all-new 2013 Pulsar sedan in Japan. Called the Sentra in overseas market, the new Pulsar sedan has been completely redesigned both exterior and interior as well as powertrain. The new Pulsar sedan will be added to Nissan Australia’s range this December, with the hatchback version following not long after.

For 2012, the stylish, roomy, fun-to-drive Nissan Sentra sedan remains a versatile performer for people with busy weekday, weekend and around-the-clock lives.  And, with six well-equipped models and available equipment ranging from the Bluetooth? Hands-free Phone System to the Nissan Navigation System and RearView Monitor, Sentra has the perfect combination to match any need or budget.

“Sentra once again meets and exceeds all the expectations buyers in the compact sedan segment have – good fuel economy, durability, safety, reliability and affordability,”

“Sentra, however, goes far beyond that with a completely unexpected level of style, roominess, responsiveness and versatility – attributes that set Sentra apart in the segment.”

Inside, the interior continues the sporty, functional theme of the exterior, with the use of high quality materials, large gauges and a spacious, flexible center console. All Sentra models receive cloth seat trim with available leather-appointed seating and heated front seats on 2.0 SL.

Sentra’s interior is designed to comfortably accommodate five full-size adults, with an ample passenger volume of 97.7 cubic feet. Along with the roomy, social space of the interior, Sentra’s trunk provides 13.1 cubic feet of cargo space.   With the 60/40-split double-fold rear seat (the bottom cushion folds forward, allowing the seat back to fold down flat), Sentra offers exceptional cargo flexibility for carrying long, bulky items such as snowboards, hockey sticks and even bikes.

Other storage solutions include a rear seat armrest with cupholders that can accommodate a 20-ounce bottle and 32-ounce drink cup, extra instrument panel storage next to the driver’s door, and a large glove compartment that can fit a 8×11-inch writing tablet or a large-sized map book.  The center console offers multiple storage options, including an adjustable cup holder design and cell phone space.

Along with ample roominess, Sentra is offered a wide array of premium equipment, including available Nissan Intelligent Key® keyless entry and ignition system, Bluetooth® Hands-free Phone System and premium Rockford Fosgate-powered audio system with 8 speakers. An Interface System for iPod® is standard on all Sentra models except Sentra 2.0.

The advanced 2.0-liter Nissan MR20DE engine has an aluminum block and is designed to offer an exceptional balance of responsive acceleration, excellent low and mid-range torque and increased thermal efficiency.  The engine is rated at 140 horsepower and 147 lb-ft of torque.  Up to 90 percent of the torque is achieved by 2,400 rpm – providing comfortable driving and excellent fuel consumption in real world driving.

Another package offered exclusively on the Sentra 2.0 SR is the Special Edition Package.  It combines all of the features of the Moonroof Package, Technology Package and Convenience Package at a substantial saving over what those packages would cost individually.  The package also features a unique Special Edition wheel finish and Special Edition badge on the rear deck.