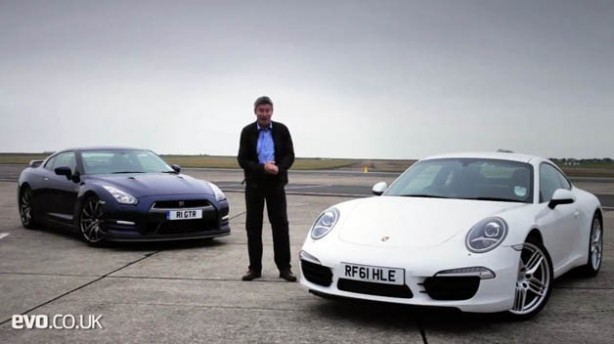 Japan’s greatest supercar, the Nissan GT-R, seems to be the default sports car where others are judged upon. It has seen many of its nemesis off the ring and still reigns supreme.

However, the rivalry between the Nissan GT-R and the Porsche 911 is arguably the most intense. With both models having recently been refreshed, the GT-R with its annual update, and the 911 a thoroughly new model, a new shoot out is inevitable.

The folks at UK’s Evo magazine have done just that. They have taken the updated GT-R and the new 911 Carrera S to the Bedford Autodrome for a little see off. To top it off, they have invited Tiff Needell from Fifth Gear to get behind the wheels.

2012 brings an extra 20bhp to the GT-R for a total of 542bhp, cutting its 0-100km/h dash time to a blistering 2.8 seconds. On the other hand, Porsche’s latest 911 seems to be ‘underpowered’ in comparison with just 394bhp, and completes the century sprint in 4.8 seconds. However, it is also a whopping 335kg lighter than the porky GT-R. So, which one of these is faster around the drome?

Hit the play button in the video below to find out…..