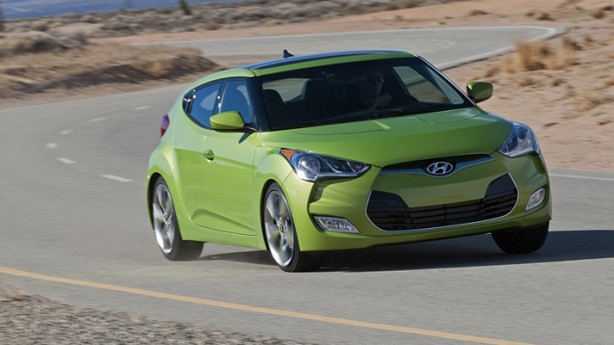 Sharing the spotlight with the Curb Concept is Hyundai’s Tiburon replacement, the Veloster. The car started life as the Veloster concept at the 2007 Los Angeles Auto Show and is now a production model 3 years later.

Showing Hyundai’s new found confidence in car design, the production model stays true to the concept’s design. In fact, we could say that it is actually more eccentric than the 2007 design study, thanks to its asymmetric layout with a single door on the driver’s side and two conventional doors on the passenger side.

Hyundai claims they took inspiration from a high-performance sport bike for the Veloster’s exterior design, while inside, the centre stack and controls are said to resemble a sport bike fuel tank and incorporate an available push-button starter. The company added that the air vents are inspired by motorcycle tailpipes, while the floor console mimics the seat of a bike.

In North America, the Veloster will be offered with an all new 1.6-litre 4-cylinder engine featuring direct injection. It produces 103kW and 167Nm of torque. This is mated to either a 6-speed dual-clutch transmission developed by Hyundai or a 6-speed manual.