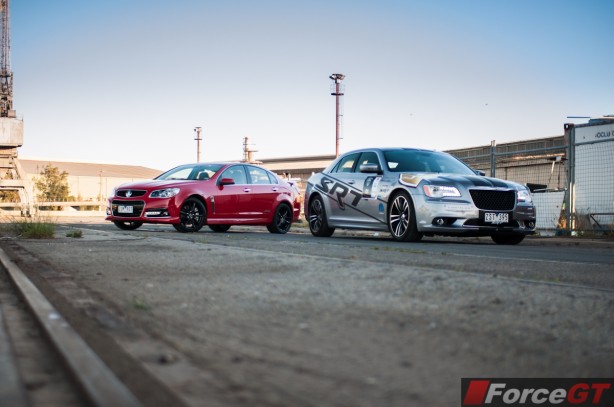 617kW of power and 1,161Nm of torque. Enough fire power to launch the Apollo 13 to the moon. One Australian. One American. Both with a big petrol V8 at the front that powers the rear wheels and big Brembo stoppers as anchors. And the best part – both are ForceGT’s for the week. Bring on the fun times!

Meet the challenger in the red corner – the 2013 Holden Commodore SSV Redline in Manual guise. Its 6.0-litre V8 heart pumps out 270kW of power and 530Nm of torque, driving the fat rear tyres via a 6-speed manual transmission. 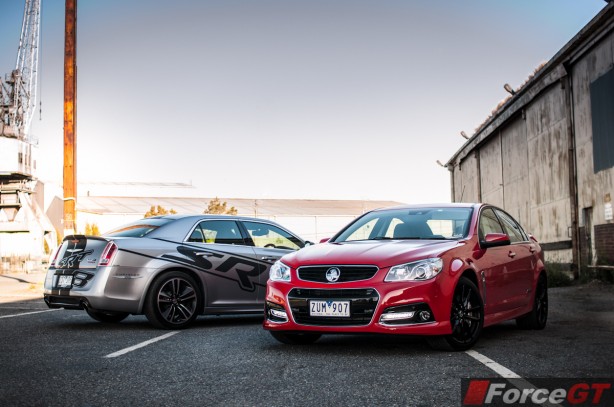 In the silver corner, the 2013 Chrsyler 300 SRT8 Core beats its hairy chested 6.4-litre HEMI V8 that churns out 347kW and 631Nm of pure American muscle, sent aft via a 5-speed automatic gearbox.

While the STR8 Core’s output is more closely matched with the HSV Clubsport R8, from a pricing point of view, it will mostly be crossed shopped with the SSV Redline. As Holden was unable to supply us with an automatic Redline, the match up was done with the manual model.

Incidentally, it puts out an extra 10kW and 13Nm due to the absence of the auto’s Active Fuel Management system, which shuts down half the cylinders at low loads. 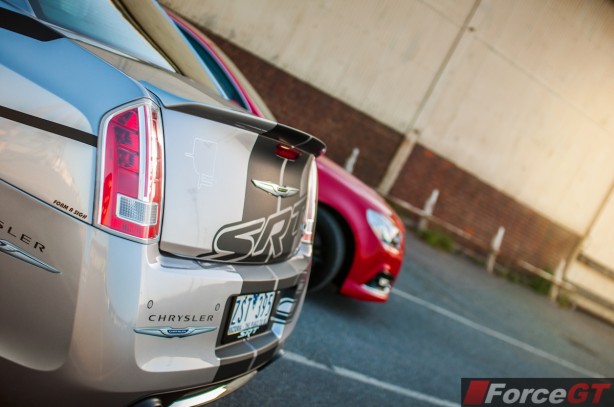 $4,510 separates our contenders in the Aussie’s favour, with the SSV Redline coming in at $51,490 against the SRT8 Core’s $56,000 ask. The gap narrows to $2,310 if you pick the 6-speed automatic variant. Dive further into the Holden’s spec sheet and you soon realise its tremendous value for money proposition. Leather seats, 9-speaker Bose sound system, Rear View Camera, Blind Spot Assist are all standard on the local sedan but have taken a leave of absence from the stripped-down SRT8 Core.

Additionally, Heads-up Display, Lane Guidance, Collision Warning System and Automatic Park Assist are also part of the Redline’s comprehensive package. What the extra coins buy in the SRT8 is an extra 77kW of power and 101Nm of torque, in one of the most powerful naturally aspirated V8s on the market today. It will catapult the close to two-tonne mean machine to the nearest horizon from a standstill in 5.4 seconds (tested). The comparatively lithe Redline (around 200kg less) follows closely behind, taking an extra 0.4 seconds. 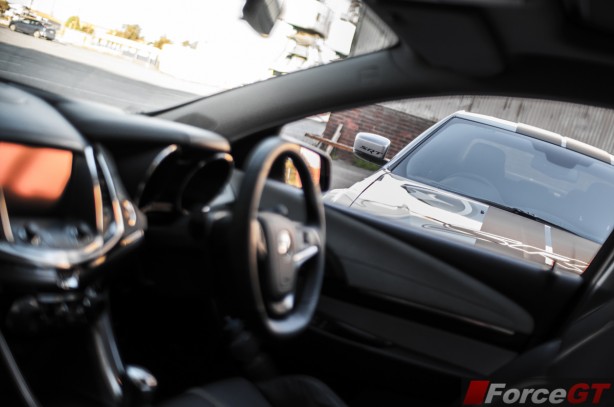 The SRT’s upper hand doesn’t end there either, with its mid-range grunt noticeably stronger than the Holden’s. On the straights, its relentless pulling power makes for swift getaways – accompanied by one of the angriest and most visceral soundtracks straight from Satan’s collection.

Still, that isn’t to say the Redline is in anyway inferior in the power stakes. Far from it. Away from the straights, the Redline steps into the spot light like a supermodel strutting her stuff on the catwalk.

Its power delivery is more linear while maximum power also comes on board earlier, making progress around the bends a more satisfying affair in the Holden. It turns in shaper than the slightly clumsier American and keeps its nose in the direction dictated by the driver. Team Red will also tolerate earlier throttle application out of the apexes with less drama. 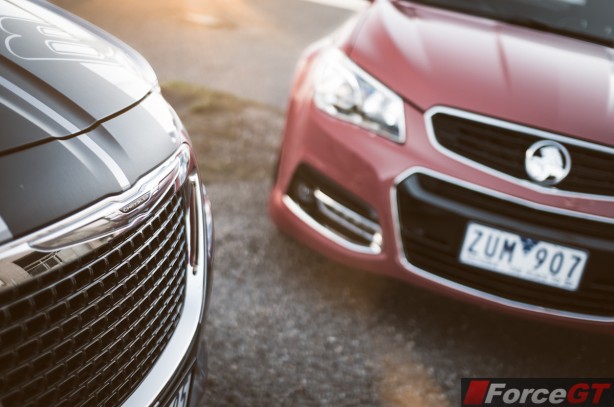 It makes up ground quickly and is soon being held back by the STR8. On the twisty stuff, despite its power advantage, the American’s handling setup lacks the precision and poise of the Holden’s talented chassis. It’s lines are not as crisp and lift-off oversteer is easily invoked. As a result, the Commodore is able to carry more speed into and out of corners than the SRT8.

While its steering is direct and well weighted, it lacks the feel of the Aussie’s sharp tiller. 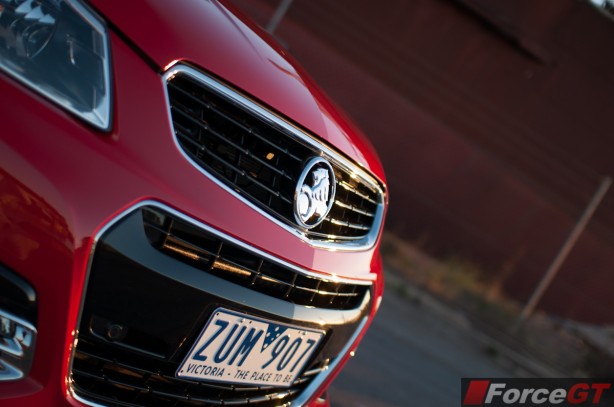 The Commodore’s six-speed manual however, is a disappointment. It is clunky and lags the precision expected in a performance sedan. In contrast, the SRT8’s five-speed auto is smooth and dishes up the right gear most of the time. However, its sports mode isn’t as satisfying as Holden’s due to its less aggressive calibration.

Both models get manhole-sized alloy wheels – 19-inch for the Holden, and 20-inch for the Chrysler. Unlike the SSV which is shod with 245/40R19 performance tyres, the Redline uniquely gets staggered 245/40R19 front and 275/35R19 back ultra-high performance tyres – the widest on any Commodore. They are painted high gloss black on White, Red, Orange and Silver cars, and polished silver on other finishes.

Expectedly, the Redline puts its power down with more authority through its fat rear tyres. 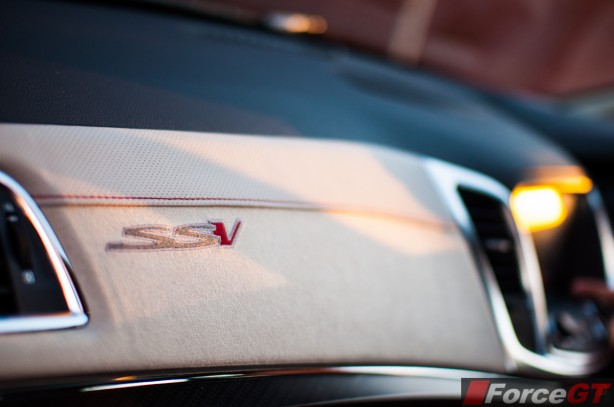 The Commodore’s interior is also where we like to spend most of our time in. Not only is the cabin classier and feels more premium, it is also better built. Its driving position is also spot on, with all controls within easy reach.

Everything in the STR8 reminds you of its American roots, from its chunky steering wheel to the fat knobs and wide seats. Sure, soft touch plastics abound. However, it’s all a bit unimaginative, safe for the baby blue instruments.

So, after a week of hard driving and burning enough fuel to power a small country, the winner is no easier to pick than when we first started. Both are immensely fun to pun around and makes all the right noises. The Chrysler, with its narcissistic streak and addictive vocal soundtrack, is the car for you if you like it rough around the edges.

The Holden, on the other hand, is just a bit sharper, more precise and, slightly more polished. It is the car that we most like to take home (via the twisty bits, of course) at the end of the day. And for that, it is the winner of this comparison, by just a whisker.

Farewell Holden Commodore. Holden has officially announced it will be retiring the Commodore by the …