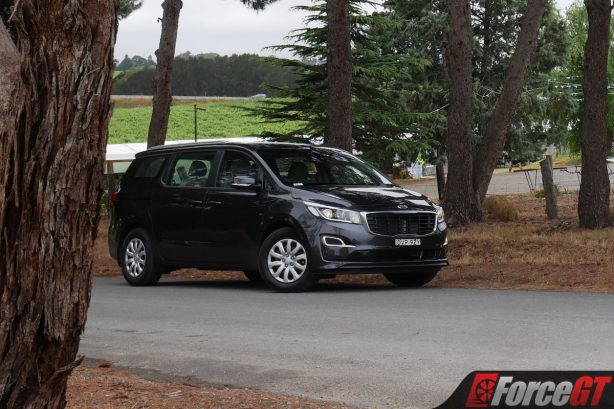 I’ll be the first to admit that I’m not the most qualified to comment when it comes to testing out a people mover. As someone without children, I personally have no need for one, and I can’t really call upon much prior experience as my parents never had one when I was growing up as their idea of a sensible family car was a sporty Subaru Liberty with a big spoiler on the back of it.

That’s why when the keys to a rental-spec Kia Carnival S Diesel slid across the desk, I was a bit thrown as to what to do with it at first. There was no real point in doing what I usually do with the cars I’m reviewing, as fanging it up some of the twisty Adelaide Hills backroads I have at my disposal certainly wouldn’t be the most rewarding thing in the world in a minivan – and I can confirm that it indeed wasn’t – and obviously I don’t have children to test out its people-moving capabilities with either.

But then, a friend came along to save the day. Knowing that I’d be in the Carnival, she threw it out there that her and a group of her friends – amounting to seven passengers in total – were planning on heading to the Moon Dance festival event at Simon Hackett Wines in McLaren Vale that weekend in early November, and asked if I felt like chauffeuring them there in the big bus in order to try it out properly. 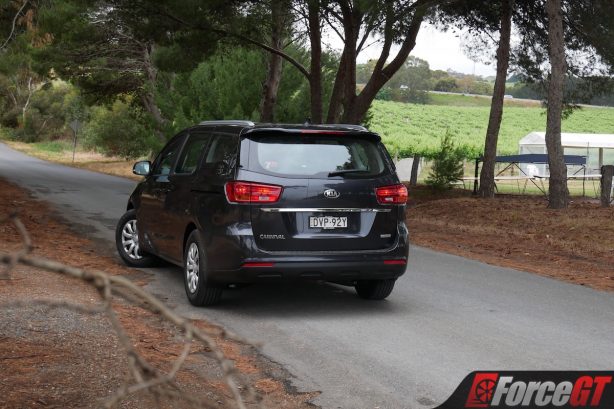 Jumping at the opportunity, I bought my ticket and relaxed knowing that I had a story sorted out. But before we get to that, I owe it to you to cover the basics of the base Carnival.

We’ve already taken a look at the SLi Petrol and Platinum Diesel models a few months ago, and we were impressed by their classy and surprisingly stylish interior and exterior appointments, but things are a little different if you go for the S.

While the Carnival’s surprisingly not-unattractive slab-sided profile remains, the shinier bits of trim and blingy wheels are unfortunately gone. In their place, you’ll find cheaper textured black plastic trim, and even blanking plates where the fog lights should be, and steel wheels with plastic hubcaps on them – yes, there are still cars out therewith them today. 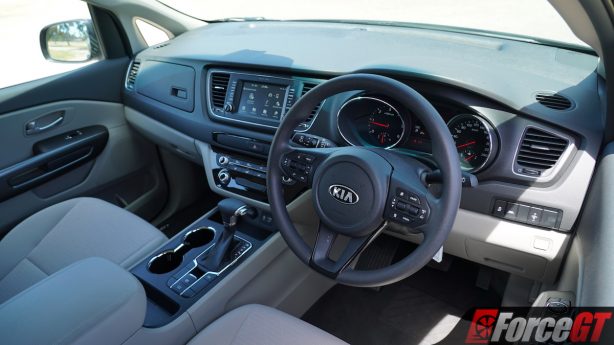 Things are cheapened on the inside too, with a smaller seven-inch infotainment screen that lacks satellite navigation (although there is Apple CarPlay and Android Auto to compensate) and digital radio compatibility, a polyurethane steering wheel, manual air-conditioning controls – although still with two zones, one for the front row and one for the rear pews – and cloth upholstery.

I do want to touch on that cloth upholstery for a second though, because it’s actually one of the best features not just of the Carnival, but of anything out there. While I was surprised by the choice of light grey for what is a family car, there’s no need to worry as all three rows are upholstered in a special waterproof fabric from YES Essentials.

And the stuff actually works, too. We tipped half a water bottle onto one of the seats and other than in the direct contact patch, it all just ran right off without a hint of residue left. Why more manufacturers don’t put this stuff in their family-focused cars is beyond me because it’s genius. 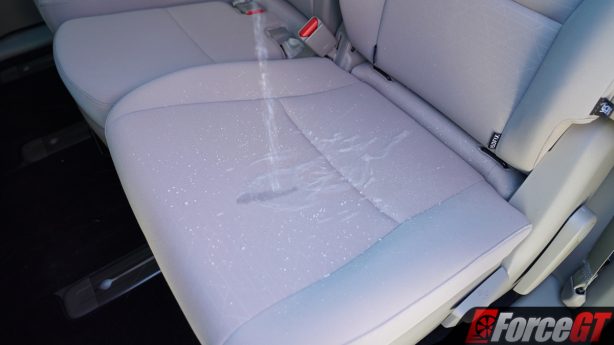 Speaking of water bottles, there are places for up to 14 of them, along with plenty of other storage spaces such as a big centre console, huge door pockets, two gloveboxes, and even a place in the front passenger footwell for a handbag to go.

The interior itself is a massive space too, with an incredible amount of headroom and legroom across all three rows. Even I at 6’2” can fit comfortably in the very back row, although that rearmost pew is admittedly a bit firm and lacking good spots to rest your arm, something that isn’t an issue for the second row with its flip-down armrests on the outermost seats.

If you’re planning on hauling copious amounts of stuff instead of people, it’s perfect for that as well. The deep boot that the third row seats fold down into offers an excellent 960 litres of space with them in place, while with them folded away into there and the second row seats pushed all the way forwards, there’s an absolutely massive 4,022 litres of space – perfect for a few spring cleaning trips to the tip. 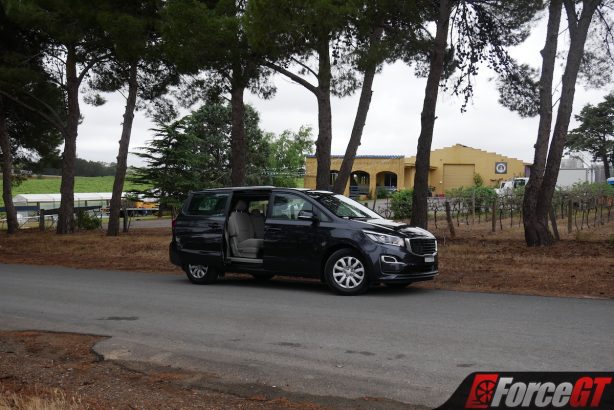 Pictured above: At Simon Hackett Wines during pack-up the following day

But while the Carnival’s ability to transport things very well is unsurprising, what’s more important, being a people-mover, is its ability to move people comfortably. And it’s important that everyone is comfortable in it as my only major complaint with most seven-seat SUVs out there – which are, of course, more stylish and generally nicer to drive than people-movers – is that they can never seat seven adults particularly well.

One-upping the lot of them, the Carnival seats eight – perfect for the number I needed to get to Moon Dance. And, from that trip, I can tell you with great confidence that it actually does fit eight adults in total comfort.

Interestingly, as my team of unknowing testers were introduced to the big beast, the comments were far more positive than anticipated. “This is so cool!” was the first comment that registered, before many impressed expressions continued to be emitted as all assumed their seats. 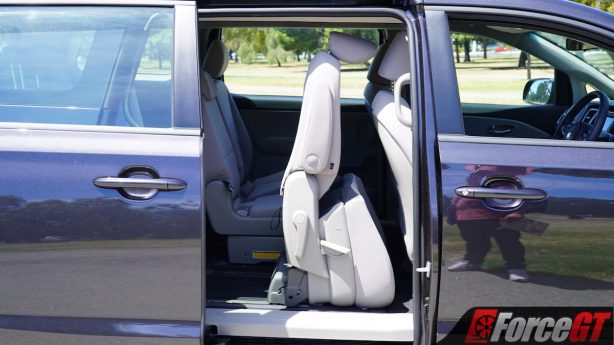 Loading your precious cargo is easy – the big sliding rear doors open compactly to reveal a massive entry point for passengers, and with a pull of a lever, the outboard second-row seats fold forwards and provide plenty of room for those in the back to get in.

With all seven of my passengers and myself secured in and plenty of supplies in the deep boot, the Carnival did squat down just a touch when at max capacity, but not really enough to notice or to have any effect on ride quality.

That wasn’t of any concern to my passengers though, as they were more concerned with hooking up to the Bluetooth – which is particularly quick and simple – as they wanted to blast their tunes. Unsurprisingly, my mellow and left-field suggestions of albums by Radiohead or obscure jazz fusion bands were quickly shot down in favour of hits by Britney Spears and the Backstreet Boys. I can confirm, however, that all of the above do sound pretty good on its surprisingly loud six-speaker stereo. 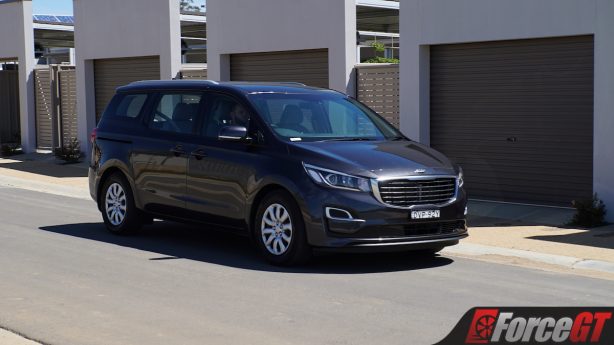 Setting off, I wouldn’t have known that I had so many people on board were it not for the constant chatter, as the big van felt almost exactly the same at max capacity as it did when unladen. The torquey diesel engine didn’t struggle at all with the added weight, the eight-speed auto effectively getting the best out of it, and the admittedly slow hydraulic power steering combined well with the Carnival’s somewhat dull throttle response to make for very smooth proceedings.

While the van’s ride was unaffected, the laws of physics can never be beaten as the weight of eight did make itself known in the corners. Around roundabouts, for instance, anything over 25km/h incites a degree of lean that is all but pleasant, and having to cool it around sharper bends like that to avoid making your passengers sick will leave other motorists a tad displeased – one particular tradie in a van behind us at one point stuck his head out of the window to yell at us. Not that I could hear his curses over the sound of everyone singing along to the Spice Girls at the top of their lungs. 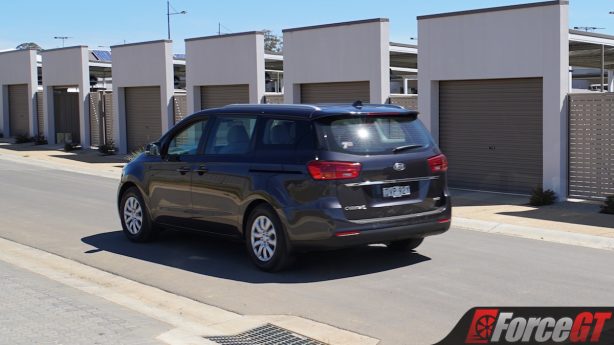 Braking was also noticeably affected by the added weight, as I was really having to work the four-wheel discs hard and utilise what engine braking I could, particularly on the longer downhill stretches on the hellish Southern Expressway. It is very stable, smooth, and acceptably quiet at freeway speeds, although when getting up to such speeds or feeding in the throttle up hills, the diesel engine does sound a bit gruff and clattery through the firewall.

After a 45 minute drive, we’d made it to the winery, the whole crew comfortable and happy – except for me, perhaps, although that was entirely due to the musical items I’d been subjected to and not at all due to the car.

The Carnival truly did make such a journey as that possible as not a single complaint was announced from any of the eight on board on the way there or the way back, and that just wouldn’t be possible in an SUV. Even if we may have looked better doing it, we’d still have been a seat short, so if a car being fit for purpose was one of the categories we scored cars on, the Carnival would truly have 11 marks out of 10 there. 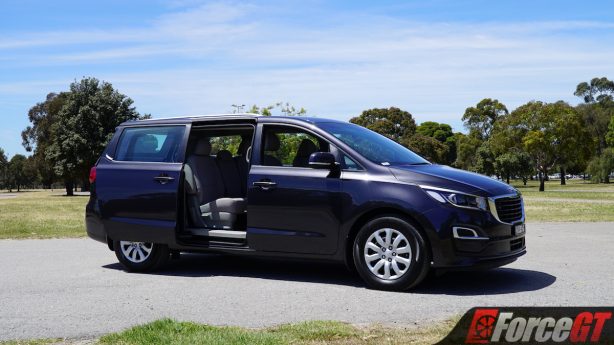 There’s absolutely no doubting the Carnival’s ability to carry a crowd, as it’ll swallow eight adults with ease and will transport all of them in total comfort. It’s very cleverly designed too, with plenty of cupholders and the genius use of waterproof seat upholstery making it perfect for carting around your kids or your mates.

The base spec might be a little underdone in terms of trim, and may look a little cheap with its plastic hubcaps, but it does make an awful lot of sense as a rental car. The diesel may have its noisy foibles too, but it is torquey enough for the application and should be relatively easy on your wallet too.

And while it might not be all that fun to drive, the Carnival isn’t really meant to be, and it does admittedly handle itself relatively well when loaded up. If you really need a people mover that can handle a crowd, the top-selling Carnival is definitely your best bet, although I would suggest stepping up from the base model if you’re buying one for yourself and  if it isn’t just a rental.