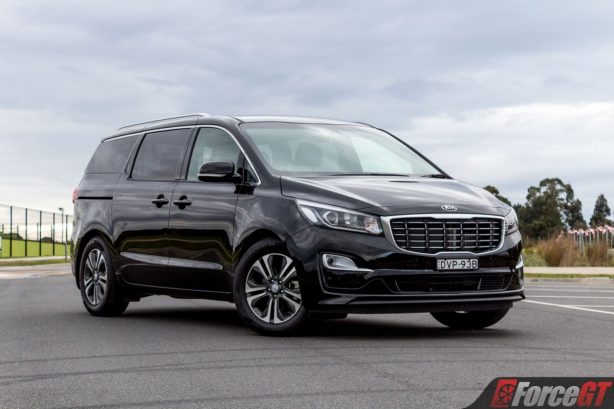 There are times when even a mammoth sized SUV sporting 7 seats won’t cut the mustard. Yes, you do get a total of 7 seats but that’s in a car originally designed to have 5 leaving the rear cramped for passengers and stripping away any storage space for cargo.

Against the all conquering SUVs it’s good to see that the domain of carting a hoard of adults around still falls to the humble minivan. Kia’s latest incarnation of the Carnival people mover has been updated for 2018 and comes in S, Si, SLi and Premium grade powered by either a petrol V6 or turbo intercooled 4-cylinder diesel. And our attention is honed in on the upper SLi and Platinum grades. 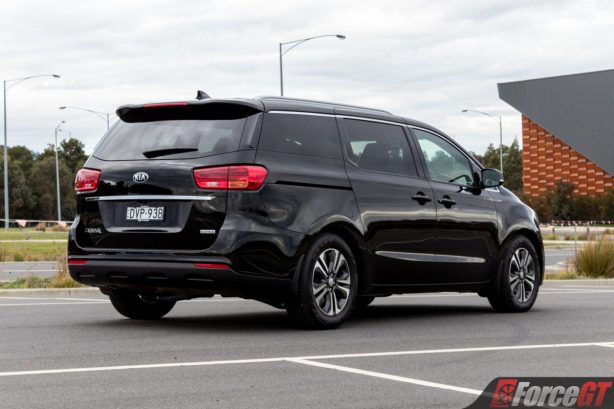 With van like dimensions there’s a huge canvas that the designers get to play with when putting together a minivan and once again Kia’s design team have produced a handsome looking machine. Their familiar tiger-nose grille sits proudly up front finished in chrome which contrasts great against the black paint our SLi review car came finished in. More chrome trim flows along the roofline to the rear where the floating roofline stands above the dark tinted windows. Matched with the five spoke 17 inch alloy rims on the SLi or multi spoke 18-inch on the Platinum, the Carnival has a real presidential secret service look going for it that imposes on the road. 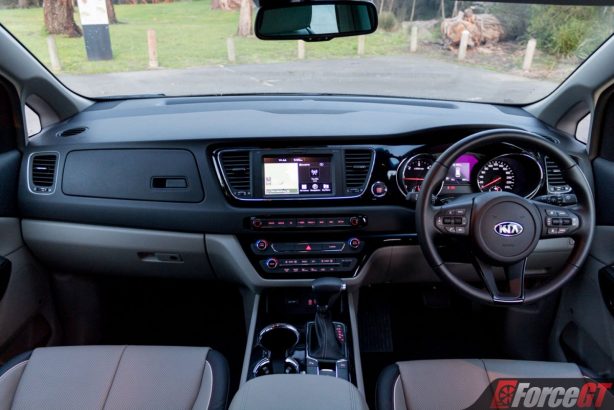 Grey two tone leather lines the interior complemented by piano black and the occasional flash of chrome. Even without a sunroof there’s plenty of light soaking its way through to the spacious cabin making the Carnival a pleasant space to occupy for short and long trips alike. While some elements are finished in cheaper plastic the majority of touch surfaces are lined with plush leather and the overall build quality was top notch.

It’s well insulated from the outside too, blocking out all manner of road and wind noise from permeating its way inside. There’s plenty of storage to stow your bits and bobs away up front with two glove boxes, capable dual drink holders and a little storage pocket tucked into the side of the centre console surround. The centre console storage bin features a padded interior to stop rattles and a light to help you dig out your belongings in the dark.

Visibility for the Carnival was quite decent with no massive blind spots. Blind spot monitoring is only offered in the range topping Platinum but you can easily live without it in the SLi. 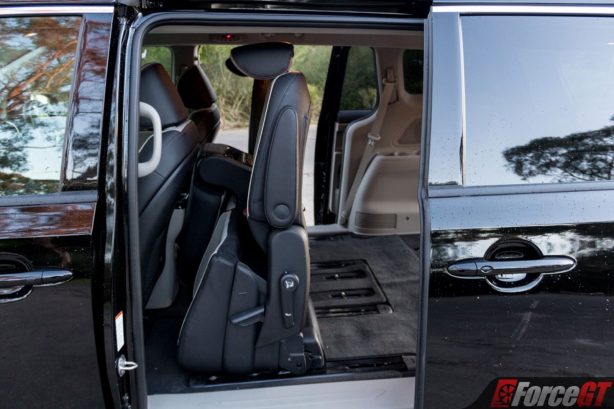 Middle row passengers are sure to enjoy the dual cabin chairs and abundance of space provided to them once they’ve made their way in through the electric sliding doors. Plenty of ventilation is provided thanks to the triple zone climate control though it’s the driver side passenger who gets to play god with the controls mounted on the right hand side rather than the centre. The rear of the centre console houses a single USB charging port along with a storage tray and another glovebox.

Down back the final row of seats offer up adjustable headrests and provide plenty of room for three adults although it’s the driver side seat that gives slightly more space than the others. Getting into the final row is a piece of cake where the mid row seats contort forwards and upright to provide as large a gap to the rear as possible for passengers. The seats also lock in place for uncompromised cargo carrying capacity. 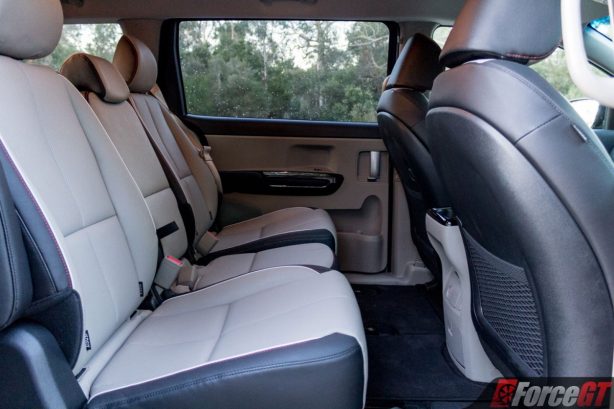 With all the seats up there’s still decent space in the boot for storage due to the deep floor. Dropping the seats is a bit counter intuitive as it’s a two motion ordeal before they tuck into the floor leaving a flat cargo carrying space. The floor may be flat but those exposed seat mounting hooks remain in place along with the hinge pockets so extra care will be required for easily scratched cargo or goods that may catch on the surface when sliding in and out. 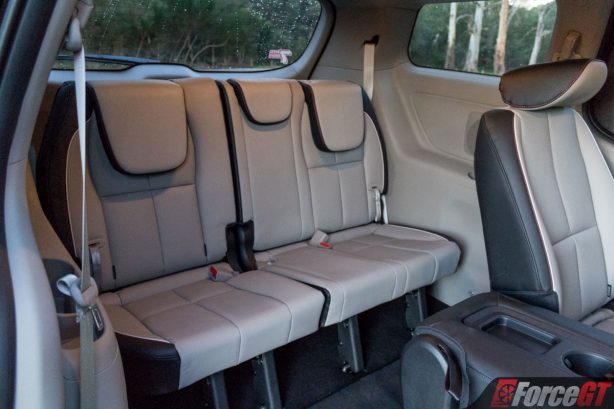 Two engine choices are available and we were able to test them both. First up is the 2.2 litre turbo intercooled diesel four cylinder that makes 147kW at 3,800 rpm and a chunky 440Nm of torque at 1,750 rpm.

As part of the 2018 update, the diesel engine has been further refined with improved NVH levels thanks to acoustic covers for the engine block, diesel particulate-filter and drive chain case and a sprocket rubber coating.

For a diesel it’s refined enough to not feel agricultural and the respectable amount of torque is ample to get you up to speed even when loaded up.

Fuel economy is a respectable 8L/100km against the recommended 7.6L/100km which brings up the full tank range to an interstate travelling 800km. 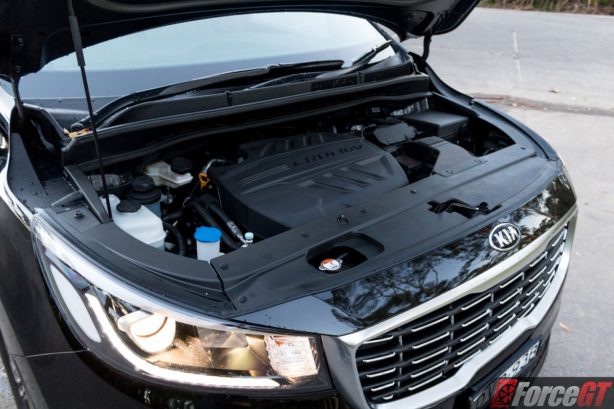 The petrol engine is a different experience entirely. The grunty 3.3 litre V6 petrol engine lifted from the Stinger drops the turbochargers and comes with 206kW at 6,000rpm and 336Nm at 5,200rpm. The key difference here is where these power figures are reached – way up high in the rev range, which requires you to wind it out. Doing so will unleash the spine tingling rorty V6 induction note that is a pleasure on the ears. In comparison to the diesel you don’t get the same down low pull but once you’ve reached those higher revs and the engines at full song it gets up to speed much quicker than you’d expect for an 8 seater minivan.

Fuel economy figures came in at 11.9L/100km compared to the rated 10.8L/100km and even with that lovely V6 soundtrack I’d opt for the diesel without a second thought as it’s the more drivable and efficient of the two in the majority of situations.

Each variant come with a new 8-speed torque converter automatic (replacing the previous 6-speed) that’s both smooth and quick to swap gears. It’s well matched in the diesel however the petrol drops down through the gears too enthusiastically leaving a dead spot in the middle of the rev range. 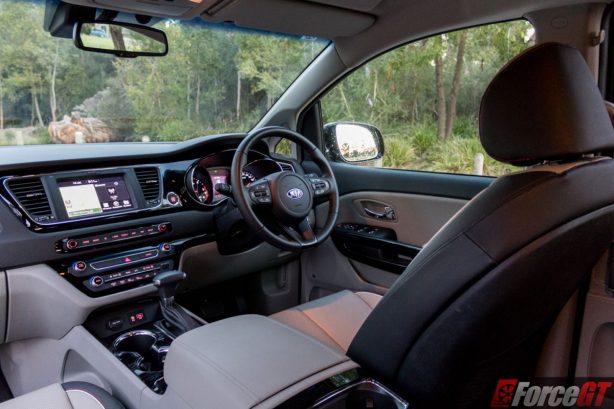 From the drivers seat there’s no denying that the Carnival is a minivan when driving about. The steering rack is slow requiring large inputs and it lacks feedback from the road. What you do feel is the feint high frequency vibrations from the engine that filter their way through the steering column and into the wheel which was true for both the petrol and diesel models but more noticeable on the diesel.

The Carnival has had it’s suspension focused on comfort more so than driving feel and it shows with noticeable body roll that leads into front heavy push understeer when taken to the limits. Then again if you’re hammering any minivan through the bends, you’ll soon see your occupants morph into an angry mob ready to rearrange your face. Keep the Carnival at acceptable speeds and you’ll find a supremely comfortable ride even when fully loaded up. 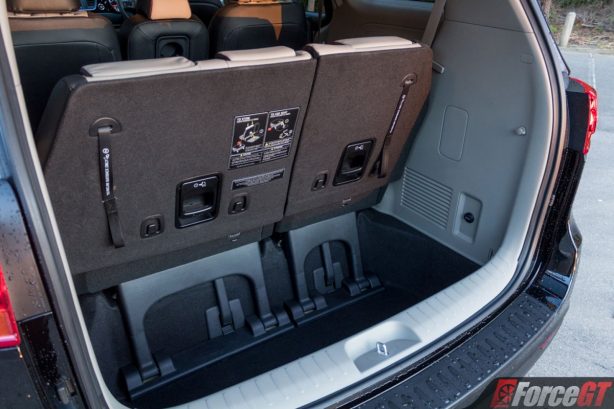 In SLi spec the Carnival comes with a respectable collection of features with the best kept for the top-spec Platinum model. I was pleased to see the previous foot operated parking brake replaced with an electronic version for much improved convenience with the added benefit of a less cluttered interior.

The JBL Premium 8-speaker stereo fitted to both the SLi and Platinum recreates your favourite tunes at volume with little distortion and the overall sound quality was well above average only lacking the increased fidelity found in top notch systems. And being DAB+ digital radio equipped has the Carnival ready to satisfy those with any variety of musical tastes. Everything is controlled through the 8-inch center touch screen which has now has Apple Carplay and Android Auto connectivity. All but the base S variant also gets built-in satellite navigation with live traffic information via SUNA.

Radar cruise control works as expected and is easily set using the included wheel controls never once missing a beat. Oddly enough you don’t get automatic windscreen wipers but you do gain dusk sensitive headlights. As a caveat there’s one thing that appears to be a Kia exclusive which is the instrument display alerting you to the wiper position.

On the safety front, the SLi comes fitted with:

The Platinum takes it up a notch with:

For those who want more from their minivan the refreshed Kia Carnival continues to make a strong case for itself thanks to its strong feature set and stylish design. The SLi variant may be priced above some rivals though that’s to be expected as its specced up more highly in the features department which can extend even further with the top of the range Premium model. While the V6 petrol is a laugh and half at full blast, it’s the diesel in particular that makes all the sense and steals the show.

After a string of teasers, Kia has today released exterior images of the all-new Optima …