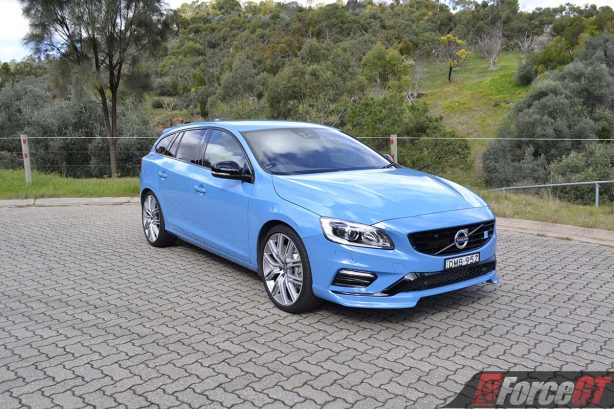 It’s hard to think of a greater chasm than a Volvo wearing a Polestar badge. Think performance and the last brand that comes to mind is probably Volvo but that’s exactly what the V60 Polestar is all about.

It is so unassuming that most people were none-the wiser our hot Scandinavian wagon was capable of hitting 100km/h from a standstill in just 4.8 seconds.

If you’re looking for the ultimate ‘sleeper’, look no further! 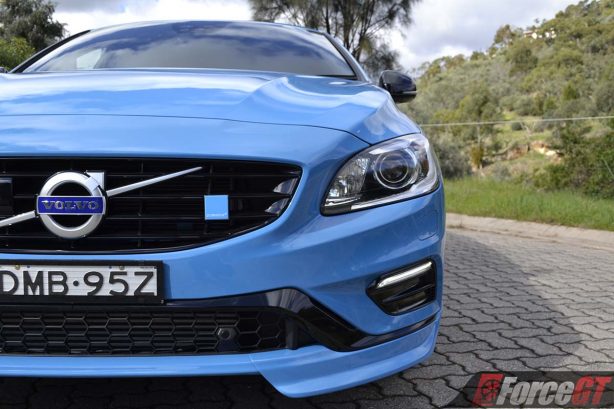 First unveiled in 2014 when Volvo enlisted its now in-house tuning arm to inject some sex appeal into the range, the latest V60 Polestar sports a downsized 2.0-litre supercharged and turbocharged four-cylinder engine, replacing the original model’s 3.0-litre straight-six turbo mill after the brand declared it would no longer be building engines with more than four cylinders.

It’s the same engine used underneath the XC90 SUV and S90 sedan. Despite its downsized heart, power is up 13kW to 270kW at 6,000rpm though torque drops 30Nm to 470Nm at 3,100rpm. Nevertheless, that’s still plenty of kilowatts and newton metres for what is otherwise a relatively practical station wagon.

While fairly refined in both the XC90 and S90, the engine sounds surprisingly coarse in the V60 Polestar, lacking the solidness we have come to expect in a performance metal. Thankfully, Polestar has done a wonderful job with the V60’s 3.5″ twin exhaust that brings the occasional blaps on upshifts to make up for the engine note. 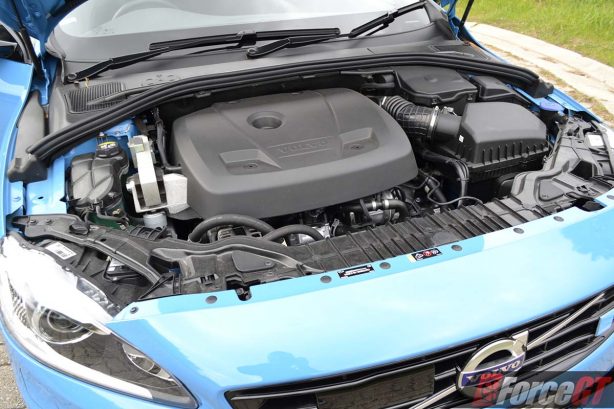 However, the good news is the new mill is 24kg lighter and is connected to a new eight-speed automatic that trims 0.3 seconds from the 0-100km/h dash compare to the old car.

Sadly, like the engine, the new gearbox isn’t a smooth operator and has a tendency to clunk from 2nd to 3rd gear. It isn’t as quick or precise as a dual-clutch transmission or a decent torque convertor automatic from the Germans or Japanese either, although doing it yourself via the steering wheel paddles masks its languid response somewhat.

The new engine loves a rev which suits its sporty character, and thanks to the twin chargers, the V60 Polestar is pretty much lag free with a sweetly linear power delivery. Together with a BorgWarner all-wheel drive system (same as before) and sharp throttle response, the V60 Polestar is quick off its feet. 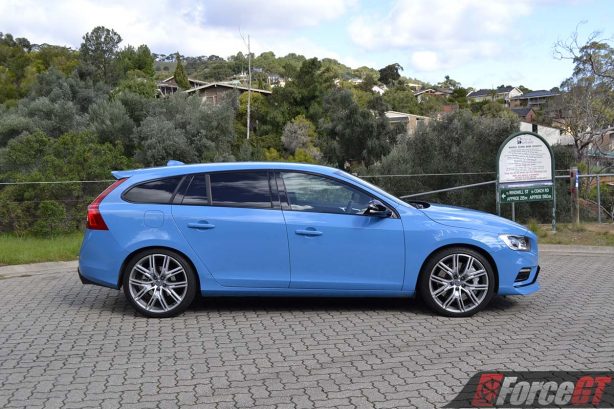 Unlike Volvo’s latest models which sit on the company’s new SPA architecture, the V60 Polestar is a remnant from Volvo’s past and rides on an old platform that traces its roots back to previous-generation Ford Mondeo. It is decidedly heavier than its newer rivals and as a result, feels less agile when thrown into sharp corners.

While most of its competitors come with sophisticated electronically adjustable adaptive dampers, the Volvo is equipped with a set of manually adjustable Öhlins shocks offering 20 settings.

Our test car was set at the mid-way point of 10 clicks out of 20, promising the best balance between comfort and handling, but in reality, falls short. 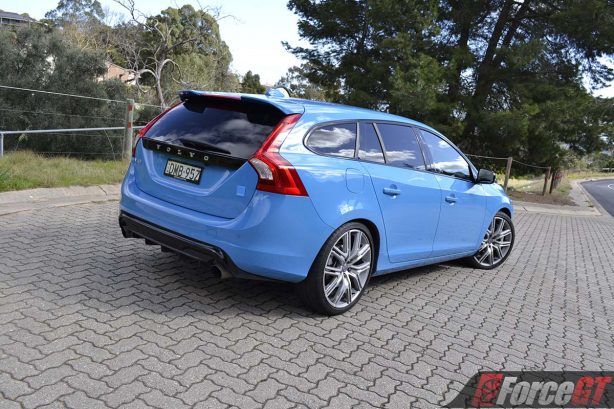 It feels sure-footed, grippy and competent around the bends (undoubted aided by the 245/35 ZR20 Michelin Pilot Super Sport rubber), but lacks the handling crispness of some of its rivals. It doesn’t turn in as sharply and there’s a hint of understeer if you carry too much speed on approach.

The biggest criticism however, comes from the V60’s bone jarring ride that makes the much-criticised C63 AMG feel like a softly suspended GT car. It would be forgivable if it handles like the C63, but sadly it doesn’t. Any road imperfections find their way into the cabin way to easily, making for an uncomfortable ride on all but the smoothest tarmac.

While the V60’s big Brembo six-piston calipers washes off speed effectively, it could do with a little more brake pedal feel, as the pedal feels soft on initial application before clamming down hard, making it difficult to modulate smoothly. 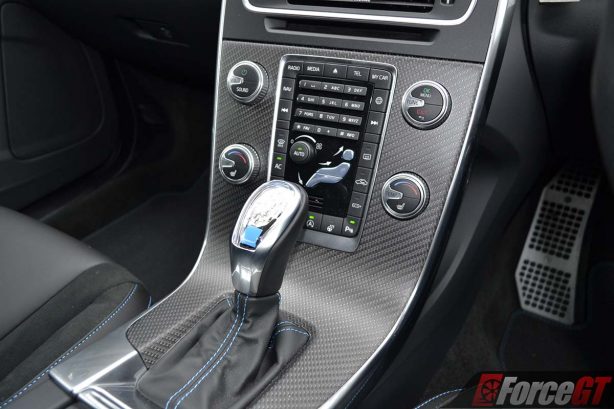 Its steering is well-weighted and linear but is slow and a little aloof; the latter conspire to give the V60 a slightly ponderous feel when driven hard. Unexpectedly, there’s also a minor amount of torque steer under hard straight-line acceleration, too.

Volvo claims the V60 Polestar will return a combined 8.1L/100km. Our weeklong test saw 12L/100km that included a mix of city, freeway and country driving.

The V60’s aging architecture is most obvious inside the car. Contrary to Volvo’s latest products with brilliantly executed interiors that come with tablet-style infotainment systems; the V60’s dashboard is a button fest. Entering a sat-nav address is a tedious process of knob twirling and pushing to move the cursor across the vast keyboard. Thankfully, Volvo’s voice control works most of the time to take the pain away somewhat. 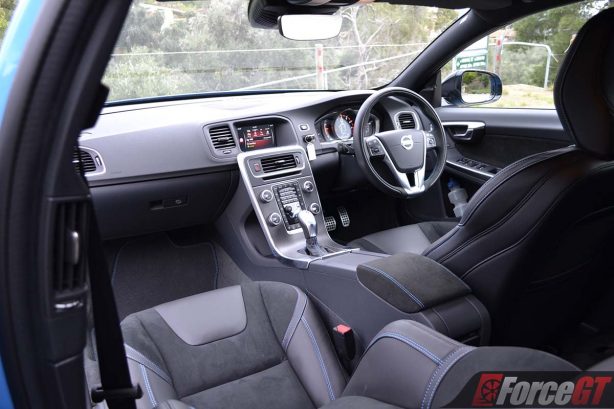 The rear seats are also comfortable, although taller passengers might struggle for headroom.

Being a wagon, the V60 Polestar comes with 430 litres of boot space, which isn’t big but is more than a typical hatchback.

Finally, it isn’t a Volvo if it’s not brimming with safety kits, highlights of which include adaptive cruise control, forward collision warning with full auto-braking, pedestrian and cyclist detection and warning system, reverse camera, lane departure warning and blind-spot monitoring.

These are on top of the generous standard kit such as Bluetooth, leather upholstery, heated door mirrors, puddle lights and bi-xenon headlights with cornering function and auto high-beam.

While there are plenty to like about the V60 Polestar such as its sporty good looks, practicality and safety, sadly as a performance car, the game has moved on and a heart transplant alone isn’t enough to keep up with more competent rivals.

However, Volvo’s brilliant new SPA architecture should serve as a good base for the next-generation model, which is also likely to be electrified.