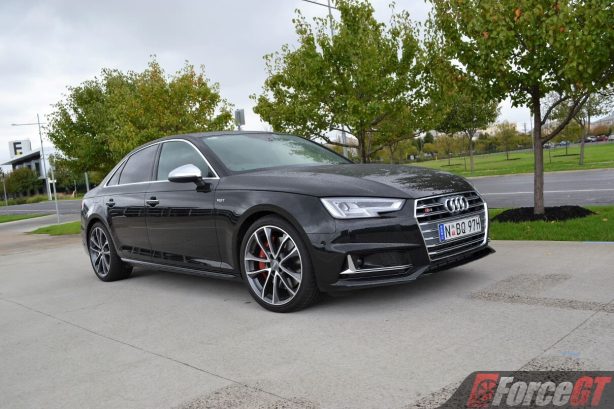 Audi’s S sub-brand has always impressed on delivering strong and accessible performance. Unlike full-blown RS models which can often be overwhelming on anywhere but a track, S-badged Audis can be fully enjoyed on the road without compromises on refinement and road manners.

The new S4 is the latest member of the family and for now, the sportiest derivative of the A4 range until the arrival of the RS 4 sometime next year. Prices tip on both sides of $100k, with the S4 sedan coming in at $99,900 and its wagon sibling, the S4 Avant setting you back at $102,900. Both stickers are before on-road costs. 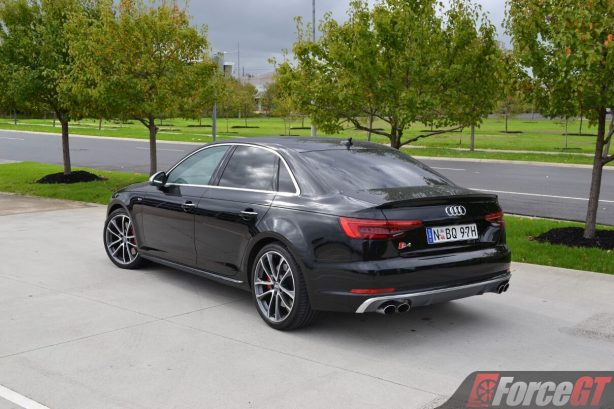 Ditching the supercharger in the previous engine for a turbocharge set up, the S4 is now powered by a new 3.0-litre V6 engine with twin-scroll turbocharger that develops 260kW of power peaking at 5,400-6,400rpm, accompanied by 500Nm of torque available from 1,370-4,500rpm.

It’s a gain of 15Kw and 60Nm over the old donk, but the bigger news is the adoption of 8-speed torque converter tiptronic automatic in place of the old car’s 7-speed dual clutch S tronic transmission.

Park the S4 next to an A4 and you will be hard pressed to tell the styling difference between the two. In fact, a S line kitted A4 would look nearly identical to the performance flagship, save for the quad exhaust tips, subtly different front grille, rear diffuser, discreet boot lid spoiler and a couple of S badges around the car. Completing the S look is a set of redesigned 19-inch wheels, which again don’t look all that special compared to the similarly sized S line rolling stock. 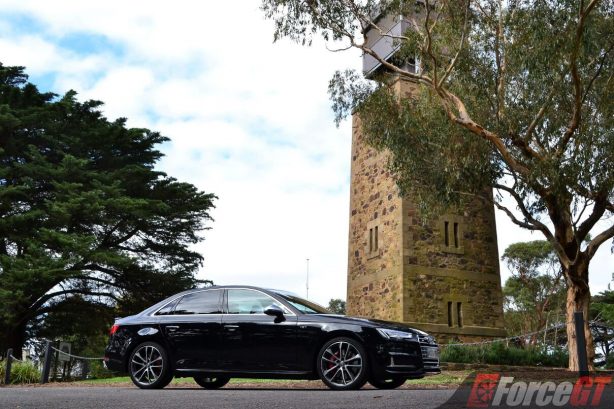 You can have red brake calipers instead of black but they come as part of the optional $5,900 S performance package, which has been specified in our test car. We highly recommend taking up this option (more on this below).

Still, it’s a smart looking sedan, coated with that typical Audi understatedness and restraint, with much of the sophistication in the finer details. If you take the importance of a stronger visual statement, then you might prefer the Mercedes-AMG C 43 or Jaguar XE S.

The inside is based on the A4 and like what we have said about Audi’s interior of late in all our recent Audi reviews, it’s a class act. The S4’s cabin is modern, functional and immaculately put together. The horizontally layered dashboard has all the controls and switches in the right places. There’s no excessiveness in the cabin; everything is sized just right, giving a sense of spaciousness throughout. Of course, the showpiece of the interior is the brilliant Audi Virtual Cockpit digital instrument panel. Replacing conventional gauges, it dispenses driving information in full clarity and high resolution. 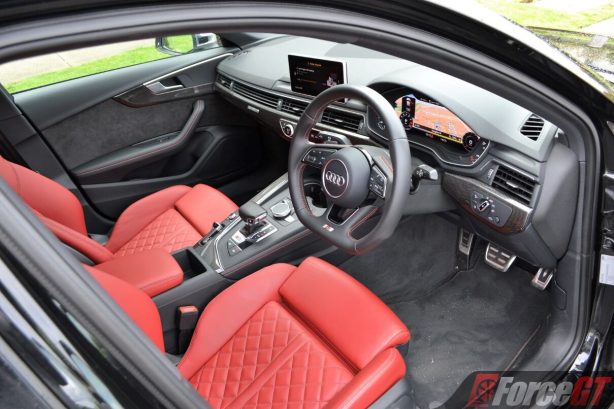 The first thing you notice upon firing up the V6 turbo is it doesn’t quite sound like a six-cylinder. It’s got its own unique soundtrack and for a moment you might mistaken it as a highly strung four-pot, too. But pile on some revs though and its sporty revelation is hugely satisfying. Wring it out completely and that sharp high pitched howl is not only delicate but also has a slight tinge of Ferrari 458 in its notes. 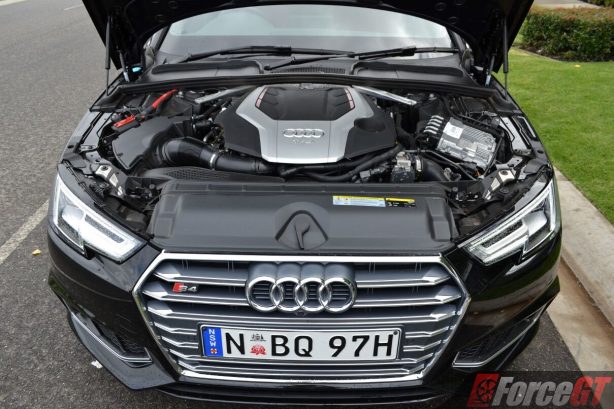 With 500Nm on tap from just off idle, mid-range kick is strong and the acceleration is explosive. Audi claims 0-100km/h time of 4.7 seconds, that’s only two-tenths of a second slower than the outgoing RS 4. Throttle response is excellent and power delivery seems to show no signs of fading until the last 500rpm or so.

The switch from dual clutch to torque converter automatic may seem like a step backward, but it’s in fact the opposite. The new tiptronic box ditches out lightning fast shifts that can easily match its twin clutch counterpart, while offering much better refinement and longevity. Its closely stacked eight ratios match well to the engine and the extra cog keeps revs low at highway speed.

What lets the driving experience down slightly is the auto idle stop/start system which is programmed to cut off the engine just before the car rolls to a halt. While there’s no issue with prematurely stopping the engine, it seems to alter the brake pressure which subsequently introduces a jerk coming to a stop, zapping off some refinement. 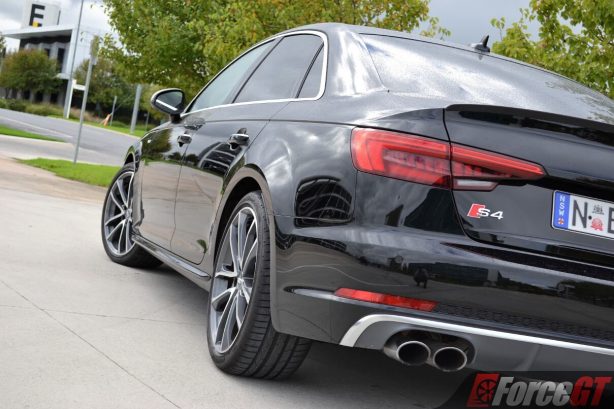 As for ride and handling, the S4 is hugely impressive. Turn in is ultra sharp and with quattro all-wheel drive there’s incredible grip. Despite its sizable footprint and tipping the scale at over 1.6 tonne the S4 feels a lot smaller to drive with swift responses allowing for quick direction changes.

Under normal driving conditions, the differential splits the engine’s torque 40/60 front/rear, though up to 85 percent can be directed to either end if slip occurs. There’s brake-based torque vectoring at the front axle. Our test car is equipped with the optional sport rear differential which employs active torque vectoring at the rear axle to channel more torque to the rear wheel with the most grip.

Switch the drive mode to Dynamic and everything tightens up even more, endowing the S4 with unrivalled composure and control. This is a sports sedan that can carve corners at breakneck speed. 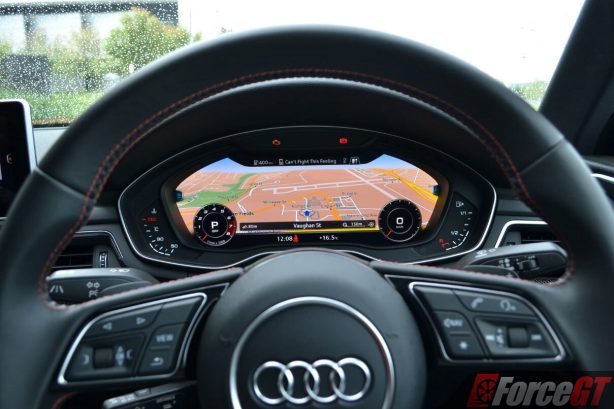 While its dynamics are close to faultless, there’s still the familiar Audi flavour to the proceedings. The steering feels slightly remote and at the limit the nose will wash wide instead of the rear coming around to point it back to line. It feels more like a very fast A4 than a properly engaging performance sedan. Well, for that you will need to get the RS 4.

In Comfort setting, the ride is firmer than a regular A4 but it remains very polished and comfortable. It’s also very quiet inside.

Standard equipment on the S4 is quite substantial. It includes LED adaptive headlights, dynamic rear indicators and keyless entry. On the inside, there’s MMI Navigation plus with 8.3-inch screen, MMI touch (handwriting recognition), DVD player and live traffic updates. 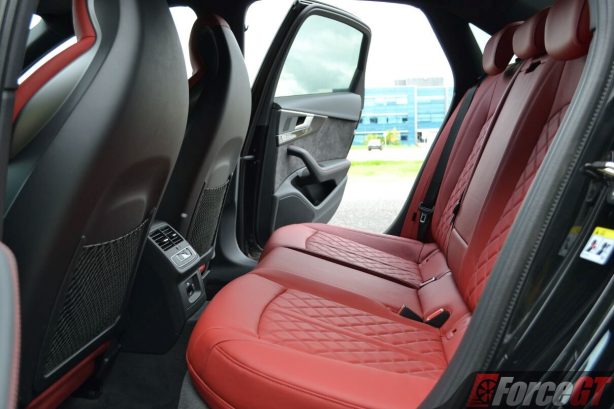 One complain is the disappointing sound system which doesn’t justify the car’s $100k price tag. For something better you’ll have to option up the Bang & Olufsen 19-speaker 3D sound.

The 2017 Audi S4 nails the brief for a fast, comfortable and finely crafted sports saloon. It’s a great all-rounded package, which is also a byword for not tipping too much into the driving part of the equation. While this certainly appeals to many, keener drivers will find the Jaguar XE S or BMW 340i offer just a little bit more fireworks.