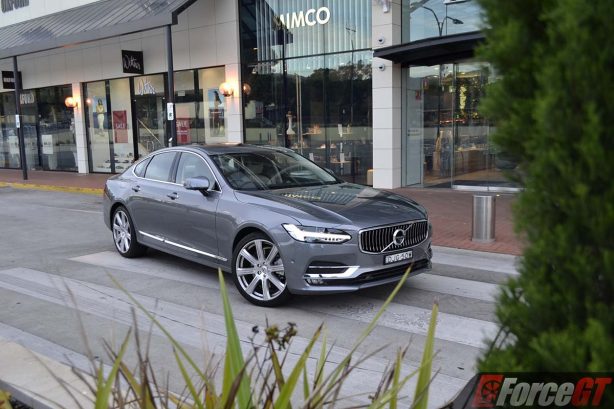 With the Volvo XC90 SUV a runaway success, Volvo’s march to greater heights continues unabated with the closely related S90 luxury sedan; the company’s best attempt yet at cracking the premium executive sedan market dominated by the Germans.

Essentially a successor to the S80 (yes, remember that one?), the 2017 Volvo S90 outclasses it in everyway and is far more sophisticated both inside and out. It needs to be because the medium executive class is brimming with talents, from the svelte Audi A6 to the properly high-tech Mercedes-Benz E-Class and athletic BMW 5 Series.

While the S80 could trace its roots back to the humble Ford Mondeo, the S90 sits on Volvo’s new SPA modular platform that made its debut on the excellent 2016 Volvo XC90 SUV. 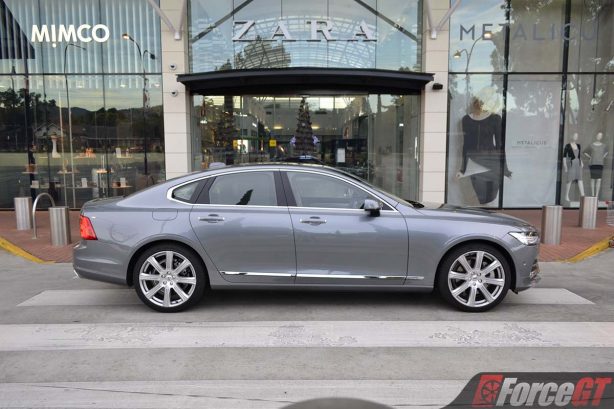 Like its high-riding sibling, the S90 eschews large engines and is instead powered by a range of turbocharged four-cylinder petrol and diesel motors. The range is relatively straightforward with just two trim levels and a couple of engines driving the front wheels or all four wheels.

In Australia, the S90 opens the door at $79,900 for the T5 Momentum and stretches to $98,900 for the T6 Inscription tested here. In between sits the D4 Momentum at $82,400 and D5 Inscription at $96,900. All prices exclude on road costs and only the Inscription models get all-wheel drive. A Twin Engine T8 Plug-in hybrid variant will join the range in the next few months. All models are paired with an eight-speed automatic.

Volvo has traditionally been associated with square, boxy designs that will make a geometer jump up and down in ecstasy. And while they still aren’t the most curvaceous objects on the road, the brand’s latest models have successfully evolved the squarish design into a modern geometric masterpiece. 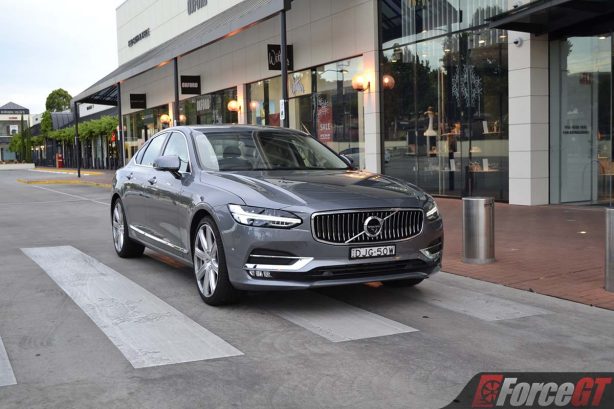 The S90 has tonnes of presence on the road, especially when shod with the optional 20-inch wheels as on our test car (19-inch wheels are standard). Its low wide front is dominated by Volvo’s convex grille and LED headlights with trademark ‘Thor’s hammer’ LED daytime running lights.

Its proportions are spot on, too from most angles although the car’s rear end design could be a challenge for some, myself included.

Inside, those who have been in the XC90 will find the S90’s cabin familiar. The dashboard is typically Swedish in its execution – refined and minimalist – while the pleasing use of natural materials, from the sumptuous Nappa leather to the polished aluminium speaker grilles and door handles makes this one of the best interiors not just in its class, but in the car world. 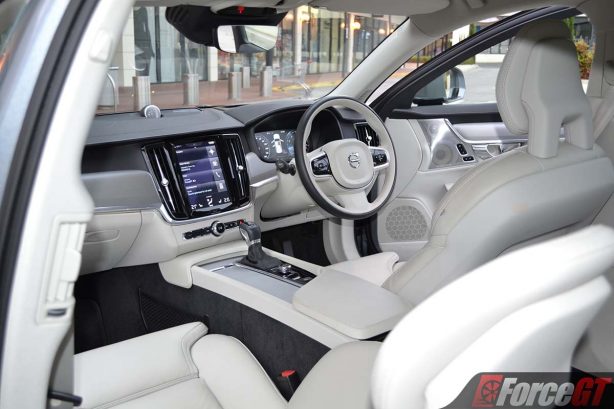 Its 9-inch iPad-like ‘Sensus’ infotainment screen – standard across the range – dominates the dashboard and controls everything from the air conditioning to the setup of the car using swipe and pinch actions that are now second nature to most of us.

A larger 12.3-inch Driver Digital Display – again shared with the XC90 and standard across the range – replaces the analogue dials in front of the driver. While it’s crisp and classy, Volvo’s graphics aren’t as attractive or as smooth as Audi’s brilliant digital display. It also isn’t as highly customisable. The optional Bowers & Wilkins sound system sounds amazing even though a $4,500 option.

The S90’s front seats can be adjusted in more ways than a NASA space shuttle – all via the screen, of course – including lumbar, side bolster and thigh bolster. Families with young children will also find the S90’s unique built-in booster seat usefully convenient.

The interior feels vast with decent head and legroom both front and at the back, but the middle seat passenger will have to straddle the huge transmission tunnel. 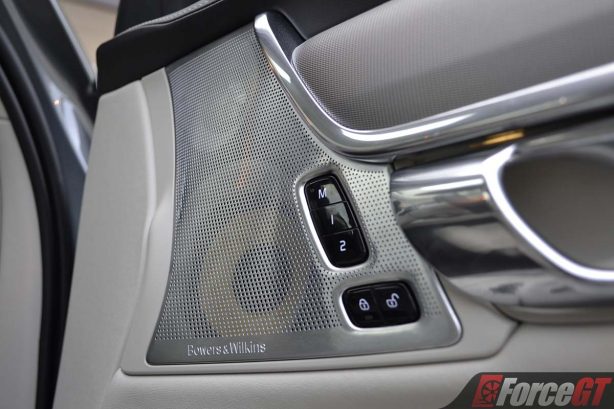 There’s plenty of useful storage in the cabin, with a large glove box and an equally sizable centre storage between the front seats, along with large bottle holders in each door.

Behind the electrically operated boot lid is 500 litres of luggage space that is sufficient for most people although it is a little smaller than some rivals, including the Audi A6. At least the hands free boot function works well. The rear seats can be folded with a press of a button near the rear headrests to expand on the luggage capacity.

But what impresses most about the new S90 is how quiet it is. The cabin is exceptionally refined with hardly a hint that the engine is running at all, plus there is no vibration from the steering wheel or pedals, either. Road and wind noise are also remarkably well supressed making for a sublime and relaxing ride. 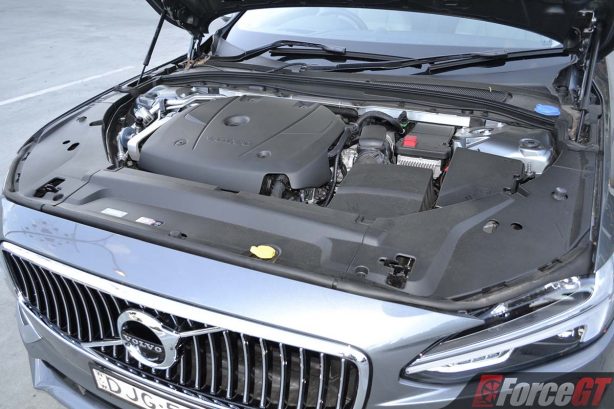 Engine refinement is good, with not much harshness or vibration. It will also reward you with a sporty engine note when you give it the prod.

The drivetrain however, could be a little smoother especially when coming to a halt where there is slight jerkiness associated with the automatic transmission dropping its gears.

Making a big comfortable car handle well dynamically is trickier than baking a good cheesecake. While the S90 feels confident taking a corner thanks to its all-wheel drive and relatively decent body control, its cornering balance is slightly nose heavy and you can definitely feel its size, even though it doesn’t roll excessively. There is also enough accuracy about the car’s handling to make it stable at high speeds on the freeway. 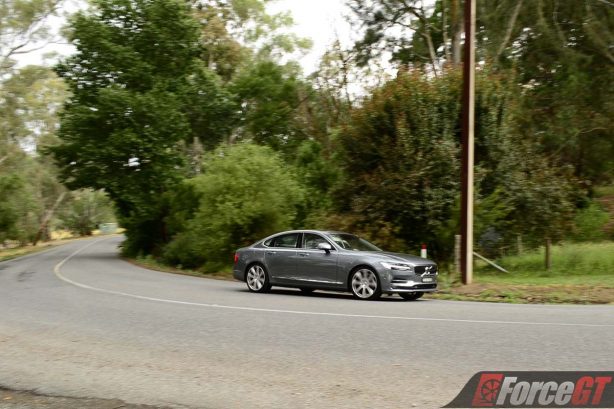 Its 255 Pirelli Zero tyres provide good grip and the car resists understeer better than expected, considering its size and suspension that is tuned for comfort more than agility.

The S90’s steering is well weighted and relatively quick and direct, if ultimately lacking in feel. Bringing the car to a stop smoothly is easy, thanks to brake pedal feel that is progressive.

So, while the driving experience isn’t what you would describe as sporty, it really comes as neither a surprise nor disappointment to us, and ultimately, its owners who are likely to cherish the S90’s excellent refinement and cruising comfort.

Likewise, they are likely to appreciate car’s excellent built quality, beautifully crafted and plush interior, and excellent attention to detail (even the key fob is wrapped in a matching leather). 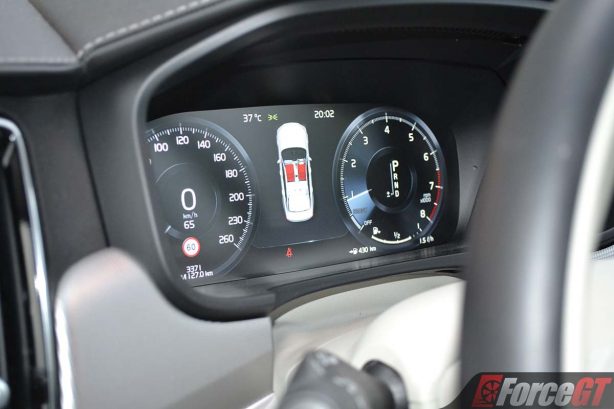 Volvo claims the T6 will return 7.5L/100km of premium unleaded on the combined cycle. On test, the test car averaged 11.6L/100km with 70 per cent city driving and our admittedly heavy right foot.

However, like most European premium carmakers, Volvo’s extensive list of optional equipment is expensive. Things like Apple CarPlay, heated seats and 360o Camera which should come as standard are also costly options.

The new Volvo S90 is a fine executive sedan that shows where the Swedish brand is heading – to greater heights.

Its combination of luxury, refinement and comfort ensures that traditional Volvo buyers feel right at home in the new car, while a measured dose of dynamism aims to put the S90 in German cars territory.