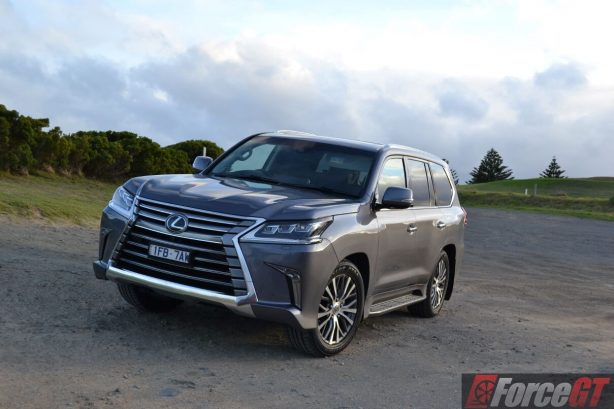 There’re two ways to look at the Lexus LX. You can think of it as a Toyota LandCruiser 200 in an Armani suit, or you can consider it the only full-size luxury SUV you can take to the Australian Outback, with a peace of mind.

Either way, this behemoth is a Toorak tractor that is too bloody big for Toorak. It’s larger than the BMW X5, Audi Q7, Mercedes-Benz GLS and even the Range Rover. The only SUV the LX will lose against in the battle for whose is bigger (ahem) is probably the Hummer H3.

Significantly updated for 2016, the LX is Lexus’ flagship SUV, sitting atop the mid-size RX crossover. Pricing for the LX 570 – the only variant available – starts from $140,500 plus on-road costs and brings a raft of new styling, mechanical and equipment upgrades as its life cycle enters the eighth year.

Only one option pack is available for the LX, which includes 21-inch alloy wheels, heated steering wheel, front seat ventilation and second row seat heater and ventilation for an additional $16,500. 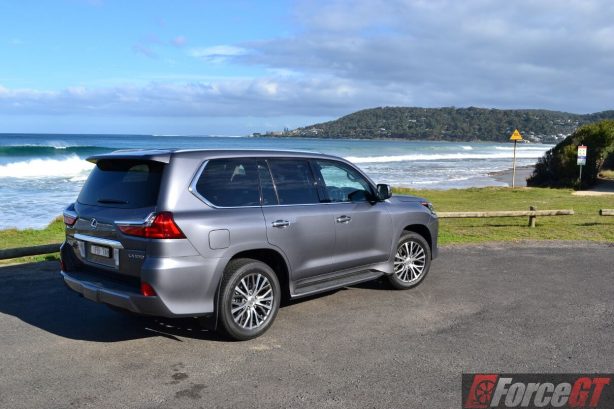 Diverging even further away from its Toyota-badged cousin, the LX’s exterior makeover is all but subtle. New to the model is a completely restyled front end with the largest spindle grille we’ve ever seen on a Lexus, giving it unmistakable road presence. It’s flanked by a pair of triple L-motif LED headlights (now commonly seen on most Lexus models) with sequential turn signals and front fog lights.

The view from the side is sharpened with redesigned front and rear three-quarter panels, rocker panel and a raised rear peak.

At the rear, there’re revised taillights and rear bumper, while freshly styled 20 and optional 21-inch wheels complete the styling updates. 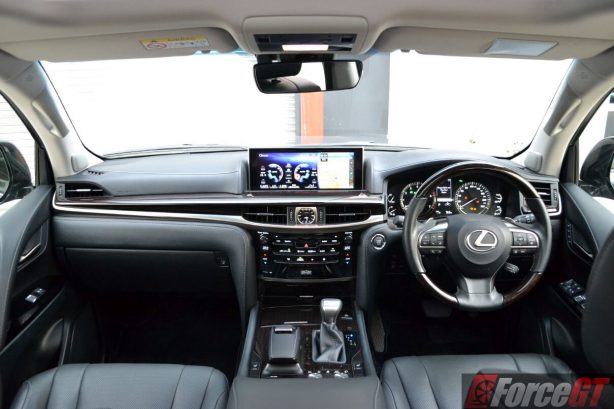 With seating capacity for eight adults, the LX’s cabin is so vast you can almost say “it feels cold in here”. First and second row occupants will appreciate the generous headroom and legroom, while the enormous width of the vehicle means three adults seated in the last two rows don’t have to rub their arms against each other. Three adults would fit in the third row bench but only for short trips as legroom is fairly tight, even with the second row seats slid forward.

As for storage, 439 litres of cargo space is available behind the third row, 1,161 litres behind the second row and a sizable 2,353 litres with both rear rows tumbled. While the liberated space is extensive, storing wide items can be a challenge as the third row seats fold upright to the side of the cargo area. The flip side is you get a bigger floor-to-ceiling opening.

The two-piece split tailgate is a nice touch, as not only you don’t need to have two acres of space behind the car to open the tailgate, the lower part can be used as a tray or a sitting bench. 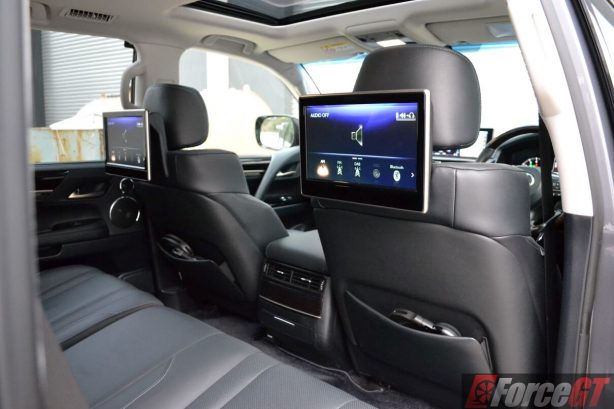 As expected from a Lexus, the cabin is impeccably put together and adorned with lavish leather upholstery, high quality wood ornamentation and glossy piano black trim. We especially like how the latter is used for the entire centre console, which not only looks premium but also adds a sense of depth and sophistication to the otherwise vast dashboard. Cheekily, Lexus has resorted to using some hard scratchy plastics for the lower door trim, which isn’t what we expect in a top flight SUV.

A head-up display (HUD) is now fitted as standard and dispenses various driving information including current speed and navigational waypoints right in front of the driver’s line of sight.

The 12.3-inch centre infotainment display has been updated with crisper graphics and is now operated via the computer mouse-like Lexus Remote Touch interface. 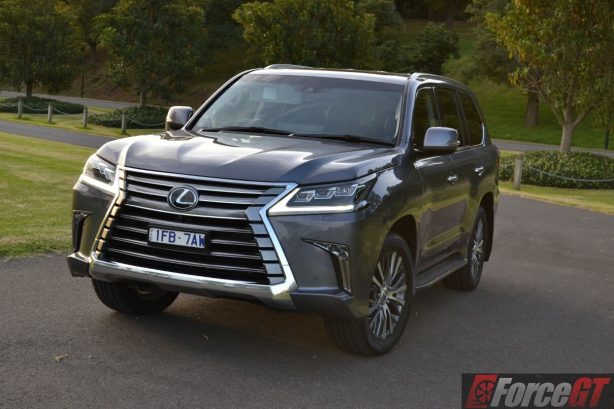 Being the flagship SUV, the LX is fitted with every luxury feature conceivable. Automatic LED headlights, adaptive cruise control, front and rear parking sensors, moon roof and a magnificent 19-speaker Mark Levinson surround sound system that is capable of transforming the cabin into a small auditorium.

The revised rear-seat entertainment with two 11.6-inch screens mounted on the back of the front seats ensure the kids stayed entertained on long trips. The system comes with a 12V outlet, HDMI/USB connectivity, remote control and wireless headphones.

Rear passengers are also treated to luxurious features via a rear console panel that enables adjustment of the climate control and seat heating and cooling (optional).

But the best feature of all is the cool box under the front centre arm rest which is large enough to cool half a dozen of your favourite beverages. 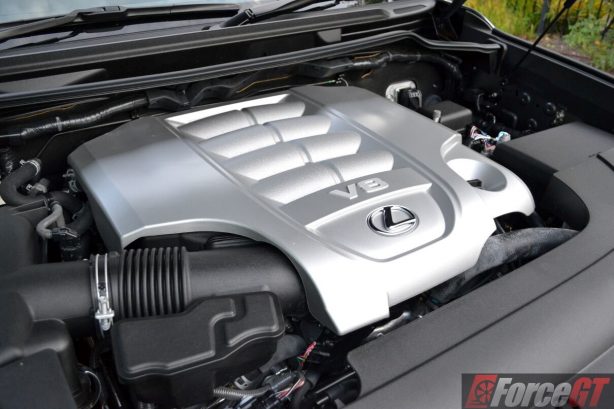 Under the bonnet, the 270kW/530Nm 5.7-litre quad cam V8 petrol engine is carried over. It’s now mated to an eight-speed automatic transmission that replaces the old six-speed automatic, offering a much smoother and more linear power delivery.

While the powertrain has all the Lexus hallmark refinement, we’d still much prefer the stronger and just as smooth 4.5-litre twin turbo V8 diesel offered in the LandCruiser 200, which is sadly not available in the LX.

Nevertheless, the LX is no slouch, as the mighty V8 urges the 2.7-tonne beast along with surprising eagerness, propelling it from 0 to 100km/h in a respectable 7.7 seconds (claimed). It’s fairly quiet in its operation, too.

The height-adjustable air suspension with variable damping does help keep things tidy and manageable around corners, but there’s still too much pitch and roll when the road is anything but straight and flat (the non-adaptive suspension in the LandCruiser is actually better). It feels even bigger than it actually is, despite the steering offers reasonable feel and precision.

Switch the newly adopted Drive Select to Sport+ mode firms up the suspension and sharpens steering and throttle response, but even this adds little to its agility, not helped by the spongy brake pedal.

Perhaps, the LX is best for crunching down miles in long, boring, interstate drives as the ride is simply sublime and the cabin is church-like quiet.

At the end of our weeklong test covering close to 800km of mix city, country and freeway driving, the trip computer reported an average fuel consumption of 16.5L/100km against a claimed 14.4L/100km. Yes, this thing is thirsty! 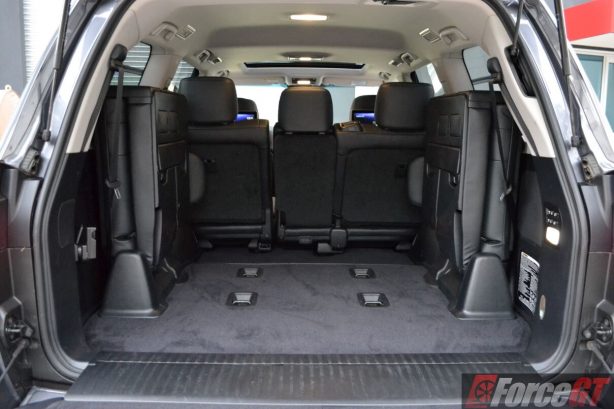 Underneath that glitzy sheet metal and plush cabin the LX is all business for any off road work you throw at it (as if this thing will ever see gravel tracks). With banks of 4WD chassis and electronic aids – Crawl Control with optimisation for different surfaces and turn assist, Downhill Assist Control, Hill-Start and Hill-Descent Assist, lockable centre differential, full time 4WD with high/low range and Multi-terrain ABS – the LX packs tremendous off road ability.

Crawl Control is particularly effective on tough tracks. Set it to suit the surface underneath, pick a suitable crawl speed and the LX would simply traverse the terrain like a walk in the park. No dramas.

Despite its age, the third-generation Lexus LX 570 still has a place in the marketspace today. It may be dynamically flawed and its new looks are bound to divide opinion, but it’s a fine example of opulent luxury with genuine off-road ruggedness backed by Lexus’ legendary reliability.

At $140k, the LX may be playing at the top end of the X5/Q7/GLS establishment, but none of those can go where the Lexus goes. And an entry level Land Rover Range Rover, which matches the LX in space and off-road prowess, doesn’t come in until we’re talking at close to $200k.