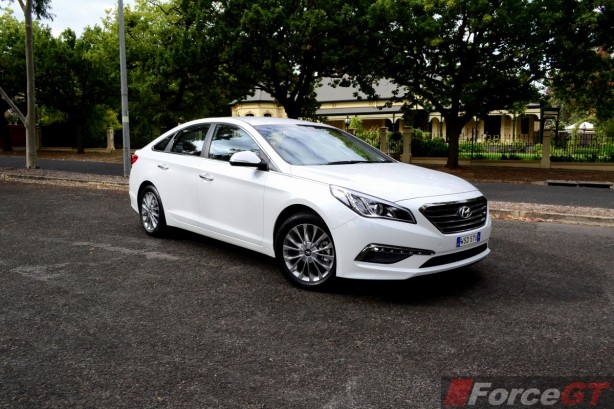 Stopped at the lights next to me is a white boxy sedan with awkward, derivative styling, faded taillights and a grey plastic dashboard shinier than the over-exfoliated face of Kim Kardashian. It is missing one of its mudguards and specks of paint are peeling off from its boot lid, underneath which read ‘Sonata’.

I’m driving the same car; only three generations later and the contrast couldn’t be starker.

Fifteen years ago, Hyundai was still finding its place in the big wide automotive world, churning out cheap and cheerless metal boxes on wheels with bland designs and even drearier dynamics.

Today, Hyundai is a confident and ambitious company with great products to match. Allow me to present exhibit A – the new 2015 Hyundai Sonata mid-size sedan. 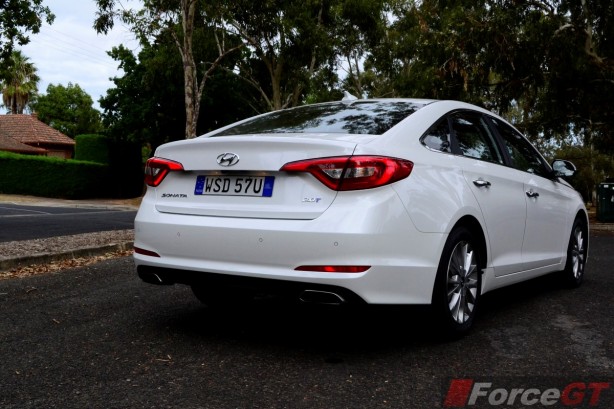 Hot on the heels of Hyundai’s premium offering, the Genesis, the 2015 Sonata marks the return of one of the brand’s oldest nameplates in Australia and replaces the Hyundai i45.

Indeed, the number of i-branded Hyundai cars in Australia is set to dwindle, with traditional names brought back for global models, while i-cars reserved for Europe-centric models.

Built on a brand new platform, the seventh-generation Sonata borrows much of its styling and sophistication from the Genesis sedan.

Available with a choice of two petrol engines spanning three trim levels, the range kicks off with the entry-level Active at $29,990 before moving up to the $36,990 Elite we have on test here. The range-topping Premium comes in at $41,990. All mated with a 6-speed automatic transmission driving the front wheels.

With the mid-size sedan segment dwindling to its lowest levels in years, can the born-again Sonata grab a slice of the increasingly competitive, yet shrinking pie? 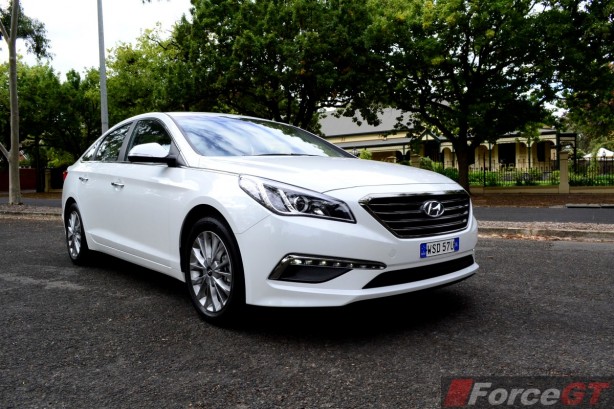 Like the Genesis, the all-new Sonata sports what Hyundai calls the Fluidic Sculpture 2.0 design language, with chiseled lines and a coupe-like silhouette.

The front of the car is dominated by Hyundai’s trapezoidal grille and flanked by a pair of sweptback headlights. Further down, a pair of LED daytime running lights is standard across the range.

Along the sides, the chrome window surround extends along the upper edge of the front guard to meet the headlight, while a prominent shoulder crease flows from behind the front wheel arch and draws ones eyes towards the rear of the car. 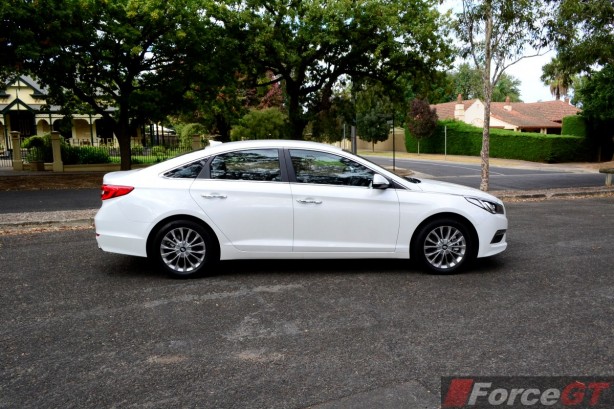 At the back, the boot lid has a built-in lip spoiler and all models bar the Active, get a pair of attractive LED taillights. The Active and Elite models ride on 17-inch alloys, while the Premium gains a set of 18-inch.

The Sonata’s handsome styling not only attracts plenty of positive looks, but also contributes towards significant aerodynamics improvement, with Hyundai claiming a drag coefficient (Cd) of 0.27.

Inside, it is clear the Sonata’s dashboard design is again inspired by the Genesis. While it is immaculately put together, with soft touch plastics and robust tactile switchgear, it won’t be winning any awards soon, thanks to its dated and conservative styling. 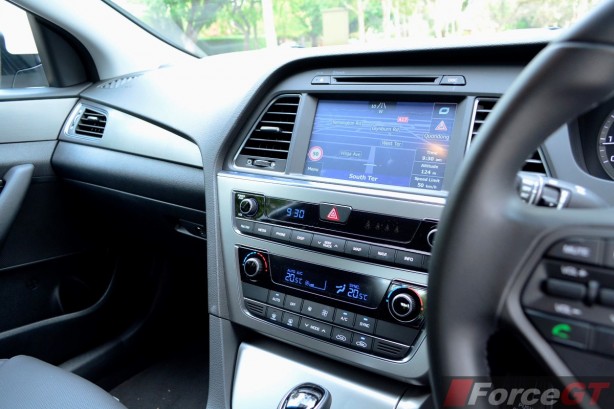 The angle of the 8-inch colour touchscreen (4.3-inch on Active) also makes it susceptible to glare under the harsh Australian sun, even at this time of the year.

Nevertheless, most people we spoke to thinks the Sonata looks more expensive than it is and was even more surprised when they saw the Hyundai badge on the boot lid. 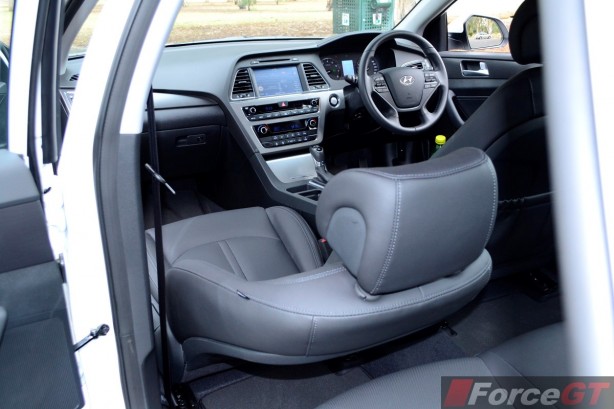 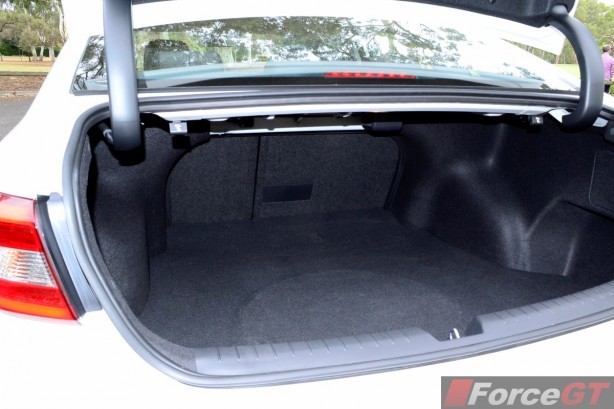 To maximise centre console storage space, the car is equipped with an outdated foot operated park brake. The top-spec Premium however, gets an electronic park brake that will likely become standard in future updates.

The Sonata’s 510 litres boot is also bigger than that of a Holden Commodore despite hiding a full-size spare. It can be further expanded with the rear seat folded down, although the narrow opening would render carrying wide objects a challenge. 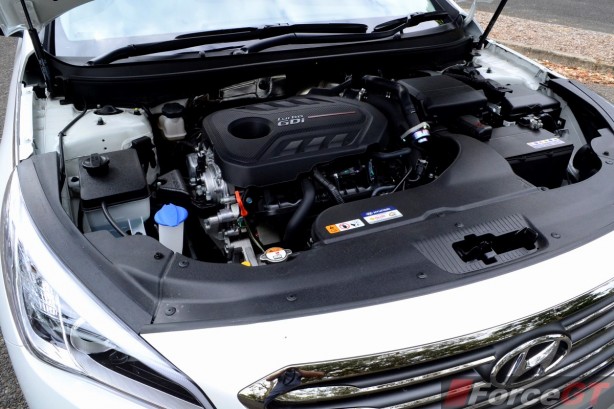 Two petrol engines are on offer. The entry-level Active is powered by a 2.4-litre naturally aspirated Theta II four-cylinder engine producing 138kW at 6,000rpm and 241Nm of torque at 4,000rpm.

Hyundai says it has made significant improvement to it and now features direct fuel-injection, better refinement and improved low-down torque. It is claimed to return a combined average of 8.3L/100km.

The headline news of course, is the new turbocharged 2.0-litre Theta II four-cylinder found under the bonnet of both the Elite and Premium. It delivers a healthy 180kW @ 6,000rpm and a peak torque of 350Nm is available from just 1,400rpm and hangs around until 4,000rpm.

It is an effortless unit with good refinement and is well matched with the six-speed auto. We rarely find the need to put the gear into manual mode to extract more power. There is good urge from the get go and in-gear acceleration is readily available.

The only minor complaint is the presence of mild torque steer if you are exuberant with the accelerator pedal.

The engine is also not the most fuel-efficient in the real world. We struggled to get it under 10.3L/100km on test despite cruising in ECO mode most of the time. This is against a claim of 9.2L/100km. 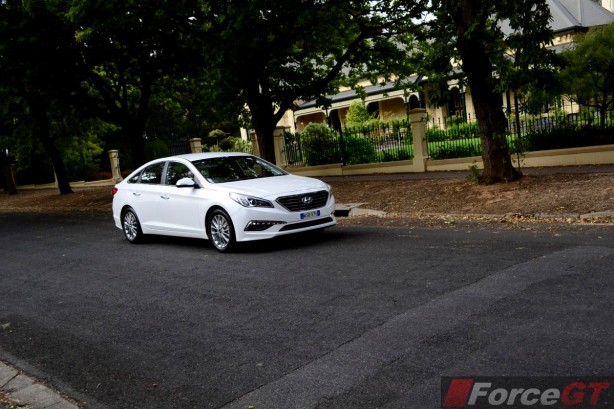 As part of Hyundai Australia’s exhaustive localisation programme, the all-new Sonata impresses with its road manners where the engineers have struck a good balance between ride comfort and good handling.

Couple with a stiffer, lighter body structure, the result is not only one of the most engaging Hyundai’s yet, but one of the most competent drivers in the segment (although the Mazda6 still holds the crown for outright athleticism).

The Sonata is well balanced and grip from the 215/55R 17 Hankooks is impressive. Its handling is predictable and turn-in is crisp. There is some minor body roll but nothing that can’t be corrected by easing off on the throttle slightly on corner entry. It feels agile for a relatively large sedan but also cruises with the level of comfort and refinement that is close to the Genesis sedan. 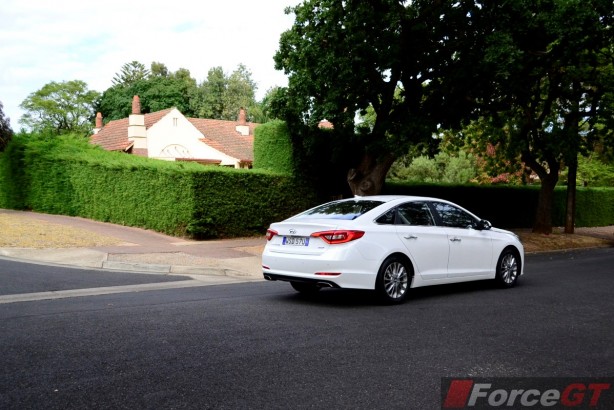 Its electric steering is well-weighted and responsive, thanks to a faster dual-mode 32-bit motor.

A Drive Mode selector enables the driver to alter the assistance and damping effect of the steering, as well as changing the mapping of the six-speed auto transmission to suit the driving style. In standard setting, the steering is light but still has a degree of accuracy to it, while in Sport; more weight is added without feeling artificial.

The Sonata’s brakes have a good feel to them and pull the car up nicely, too.

Around town, the ride is suitably plush and refined, with minimal road and wind noise on most road surfaces. 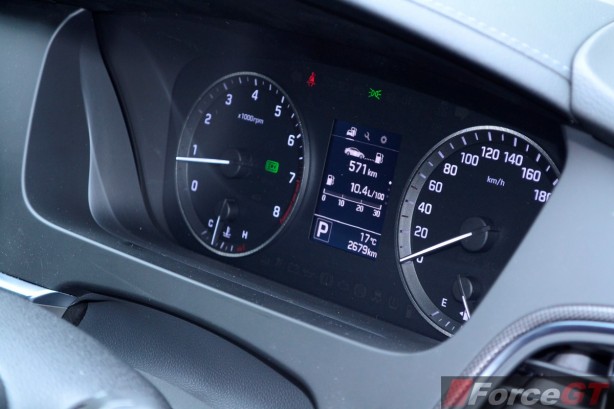 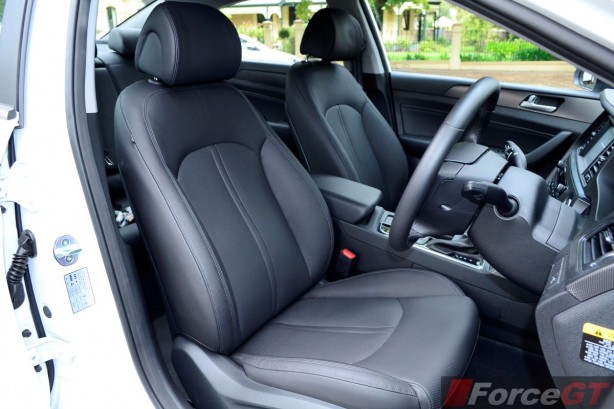 As expected from a Hyundai, equipment level is high even on the entry-level model.

On the safety front, 6 airbags, seat belt reminder on all seats, electronic stability control, hill-start assist and emergency stop signal are standard on all variants.

There are some glaring omissions though. Driving assist systems such as blind spot assist and city emergency brakes are missing from the local lineup. The good news however, is Hyundai Australia is planning to introduce them in the next product update.

The 2015 Hyundai Sonata is unquestionably one of the best Sonatas ever made. It changes one’s perception of how a Hyundai drives and feels, not to mention building on the brand’s increasingly competent dynamics and built quality.

The mid-range Elite tested here is also the pick of the bunch, offering the more powerful and refined turbocharged engine with all the essential features.